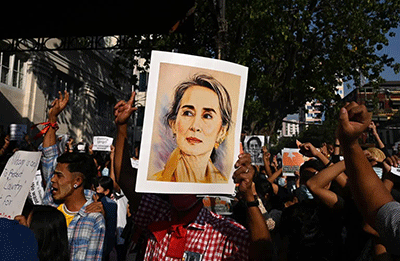 A protester holds a portrait of detained elected leader Aung San Suu Kyi during a demonstration against the military coup in Yangon, Myanmar, on February 8, 2021. Photo: AFP/Stringer

YANGON – Myanmar’s military coup leaders have imposed martial law in response to massive street protests against their democracy-suspending coup, setting the stage for an epic confrontation that some fear could soon result in the use of lethal military force.

Protesters have marched in Yangon, Naypyidaw and other cities and urban centers since Saturday in numbers not seen in over a decade to denounce the military’s February 1 putsch and demand the release of detained elected leader Aung San Suu Kyi.

On Tuesday, demonstrations were still being held all over the country in defiance of martial law, though in downtown Yangon the gathering was smaller than in recent days. Cars could be heard honking city-wide in support of the protesters.

“Democracy can be destroyed if there is no discipline,” the Ministry of Information said in an ironic statement read on state television station MRTV. “We will have to take legal actions to prevent acts that are violating state stability, public safety and the rule of law.”

The pro-democracy genie, however, will not easily be bottled. Many protesters, the majority of them in their 20’s and 30’s, have taken to flashing defiant three-finger salutes at each other while carrying provocative placards with anti-military slogans such as “down with the military dictatorship.”

The military has responded with crude tools that have so far failed to diminish the protests. Mobile data and internet services have been sporadically blocked while social media platforms including Facebook and Twitter have been wholly shut down.

“We [Myanmar] are back to [the] Stone Age,” a young protester in Yangon lamented during Saturday’s blackout.

The internet blackout has driven a rush on top-up SIM cards that allow people to send SMS text messages and make calls despite the block on mobile data.

“The military underestimated the new generation, new technologies and the fact that we have a taste of what democracy is like, even if it was limited,” said Moe Marn Wint, a red shirt-wearing protester, told Asia Times.

“For example, the junta didn’t expect so many cars to be honking in the streets to show their disapproval. Back in 2007, during the Saffron Revolution, mobilizing public opposition was not as easy,” she said.

She said the crowds in Yangon and other cities have exposed the military’s “lie” that last year’s election was fraudulent, which military chief Senior General Min Aung Hlaing has cited as justification for the coup and imposition a year of emergency rule before holding new polls.

She said that the civil disobedience demonstrations, at which hospital workers, teachers and even public servants have all recently participated, have so far felt like a celebration because people “are not losing hope that junta rule is the end game for Myanmar.”

“Many came out to the streets on their own accord without being led by any leaders, unlike 1988 and 2007,” Moe Marn Wint said, referring to the 1988 student uprisings and 2007 Saffron Revolution.

If the military junta’s strategy is to go after the movement chiefs in order to break the protests’ momentum “then they are digging their own grave because there is no leader,” she claimed.

Min, a young man from Mon state who participated in Monday’s protest in Yangon, said he has taken to the streets because “the situation concerns the whole nation” and that without a response “our future is gone.”

“It’s important for young people to get involved in the movement together. It’s not about the [NLD] party but the nation. Only if the citizens can push forward from this situation can they craft a true democracy,” he said.

Min said ethnic Mon people, one of Myanmar’s recognized ethnic minority groups, do not approve of how Suu Kyi’s ousted government treated minorities, many of which are locked in decades-old armed struggles against the military for rights and autonomy.

But the NLD’s controversies are “nothing compared to the military government” said Min, lamenting “things are returning to how they were a decade ago” under harsh authoritarian military rule.

“On the eighth day since the coup, it feels like everything is rolled back to the past. For citizens, we arrived at a situation where [when the Internet was shut down] we have no idea what’s going on,” said Min.

In his first public televised speech since the coup, Min Aung Hlaing sought on Monday to assuage the indignant public, local businesses and the international community, pockets of which have strongly condemned his coup.

He accused the parliament, NLD-led administration and Union Election Commission of not resolving what he considers irregularities in the 2020 election voting list. The military had to declare a state of emergency after attempts to resolve the complaints failed, he said.

Domestic and international election observers, including the Carter Center founded by former US president Jimmy Carter, assessed that there were no major irregularities at the 2020 polls.

In his speech, Min Aung Hlaing pledged to hold “a free and fair multi-party general elections after the end of the state of emergency [one year] and transfer power to the winner.”

“We shall continue establishing friendly relations with all countries. We invite foreign investments,” he said. His public plea came after a meeting with the nation’s top business body, the Union of Myanmar Federation of Chambers of Commerce and Industry (UMFCCI) and local bankers.

He’s more likely to face harsh, new US and Western sanctions, particularly if there is a harsh crackdown on pro-democracy street protesters in the days ahead.

Japan’s Kirin Holdings, a beer and beverage company, announced on Friday it was ending its joint venture arrangement with the military-owned Myanmar Economic Holdings Limited conglomerate. A campaign to boycott their jointly produced Myanmar Beer had gone viral on Facebook.

City Mart, the country’s largest retailer, started clearing their shelves of Myanmar Beer on Monday. But not everyone believes this will hit the military where it hurts.

“Legitimate businesses are not a core part of their revenue… [It is] icing on the cake,” a local businessman said, adding that the military’s real money comes from gemstones, extractive industries and illicit activities.

“Should things continue, we will see more such high-profile exits from Myanmar, which is a cause of grave concern,” the Myanmar-focused lawyer commented. “This is a trend that is almost certain to continue well after any kind of stability is achieved.”