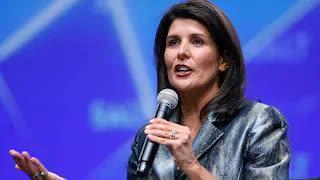 Nikki Haley has joined voices in opposition of President Biden’s executive order calling on schools to allow transgender athletes to participate in the sport of their gender identity, arguing in a column published Monday that it’s an “attack on women’s rights.”

The former South Carolina governor and U.S. ambassador to the United Nations is now speaking out after Biden issued the executive order — which states that “children should be able to learn without worrying about whether they will be denied access to the restroom, the locker room, or school sports” — on the first day of his presidency.

“Across the sporting world, the game is being rigged against women and in favor of biological men,” Haley, a Republican, wrote Monday for the National Review. “President Biden is the latest man to do the rigging, which is strange coming from someone billed as a defender of women.”

“In one of his first acts as president, he signed an executive order paving the way for a federal mandate that all schools receiving federal funding let biological men play on women’s sports teams,” Haley continued. “The order was framed as a matter of transgender rights. But really, it was an attack on women’s rights.”

Haley added that “generations of women fought hard to ensure that their daughters and granddaughters had a level playing field, because girls deserve the same chance as boys to play sports.”

She also said “transgender kids deserve support and respect,” but “the fact remains, however, that biological boys and girls are built differently” and “the best male athletes have a natural advantage over the best female athletes.”

“Men’s sports are unlikely to be affected, but if they were, you’d bet the boys would be up in arms,” she concluded. “They should be anyway, standing in solidarity with their wives and girlfriends and daughters and classmates.”

Biden’s executive order that included the language about children and school sports is more largely focused on “Preventing and Combating Discrimination on the Basis of Gender Identity or Sexual Orientation,” it says.

“Every person should be treated with respect and dignity and should be able to live without fear, no matter who they are or whom they love,” the order states. “Children should be able to learn without worrying about whether they will be denied access to the restroom, the locker room, or school sports. Adults should be able to earn a living and pursue a vocation knowing that they will not be fired, demoted, or mistreated because of whom they go home to or because how they dress does not conform to sex-based stereotypes.”

“People should be able to access healthcare and secure a roof over their heads without being subjected to sex discrimination,” it continues. “All persons should receive equal treatment under the law, no matter their gender identity or sexual orientation.”

The order strongly signals that the Justice Department is going to enforce it via Title IX — and schools that don’t comply risk losing funding.

Transgender athletics in schools was a hot topic of debate last year, when 17 states introduced bills to restrict athletes’ participation to sports of their gender assigned at birth. Yet the bills failed to gain momentum, as only one became law — in Idaho. The Trump administration supported the ban, but a federal judge temporarily blocked its implementation after a lawsuit from the American Civil Liberties Union.