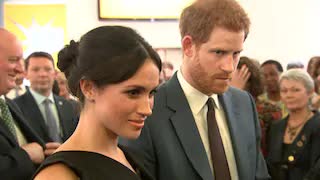 Prince Harry has been slammed as “arrogant” for quixotically clinging to the hope that he could get his cherished military titles back from Queen Elizabeth II when he and Meghan Markle face the music about the Megxit terms next month, Express reports.

After Meghan Markle and Harry shocked the world 13 months ago by announcing they were leaving senior royal life and the UK, the Queen insisted that he relinquish a number of his military titles on a trial basis.

Now, judgement day is coming considering that Meghan and Harry will have to confer with the monarch about the terms of Megxit, including the question of his military titles as well as the couple’s royal titles, at the one-year mark on March 31.

Disgusted by Meghan Markle and Harry’s have-their-cake-and-eat-it-too attitude toward royal life, conservative commentator Darren Grimes lashed out at duke on Twitter over the question of the military titles.

He blasted: “Prince Harry wants to keep his honorary military titles, despite leaving the country and his duty to Queen & Country for Wokery & Whacker

“It displays extraordinary arrogance to assume you can keep your privileges after trading it all in for Spotify & Netflix deals in Hollywood,” Grimes continued in his scathing tweet.

Royal watchers have excoriated Meghan Markle and Harry for leveraging their royal titles in a militaristic quest for big bucks, scoring huge production deals with Netflix and Spotify thought to be worth nearly $200 million all told.

A proud military vet, Harry is currently living with Meghan Markle and their toddler son, Archie Harrison Mountbatten-Windsor, in a lavish $14 million mansion in Montecito, California.

Yahoo! News reports that according to a source, the couple have another thing coming if they expect to retain even their royal titles, much less see him get his military titles back during the Megxit review with the Queen next month.

The couple can’t have everything they want — the perks of senior royalty and a private life outside of the monarchy. The source says the Queen doesn’t want them to have “one foot in, one foot out” when it comes to the monarchy, and depriving Prince Harry of the one aspect he loves about his royal life is a way to control the situation.

Express reports that the Queen doesn’t think that Harry deserves to retain his military titles after he shirked his royal duties by running off to California to live a Hollywood fantasy with Meghan Markle.

TalkRADIO host Kevin O’Sullivan recently debated the matter with former Sun royal correspondent Charlie Rae, who insisted that “Harry can’t have it both ways” by retaining his royal and military titles but not putting in the work required to retain them.

“These titles are very dear to his heart,” O’Sullivan noted. “He is about to be stripped of them because the Queen doesn’t think he deserves them while he is AWOL in California and not fulfilling full royal duties. He is determined to keep them, he is coming over to Britain. Who is going to win that battle?”

As far as Rae was concerned, “The Queen will win the battle. These are three honorary titles. No one is suggesting to take away the award or rank that he earned in his service, not at all.”

He continued: “These titles represent the Queen. The one linked to the Marines has been held by kings and Prince Phillip Harry can’t have it both ways. He can’t say, ‘I don’t want to be a member of the royal family but I still want to retain these titles and represent the Queen’. It doesn’t work that way.

Compounding all the drama surrounding his military titles, Express reports that Prince Harry has been mocked for stooping so low as to film a “Carpool Karaoke” segment — atop an open-air tour bus for safety’s sake — with his chum James Corden, host of “The Late Late Show”. To one royal watcher, this amounts to more proof that Meghan Markle, a Hollywood veteran, has dumbed down his public image.

An insider told People magazine about the shoot, saying, “They taped a COVID-appropriate segment of Carpool Karaoke on the double-decker. They have been friends for years and had a great time. A lot of joking around and laughter. They toured Hollywood and James showed Harry some special landmarks. They also chatted about Harry’s life in the US and his focus now.”

He wrote on Twitter, “Wow, this is what Prince Harry has become after less than a year in Hollywood.”

“Just another celebrity plugging his latest product on a chat show. Sad!” Royal author Robert Jobson replied to Mr Wootton saying: “Sad, really. He had a fantastic (not for profit) platform to make a real change when he was simply a Prince of the realm. Clearly it wasn’t enough.”