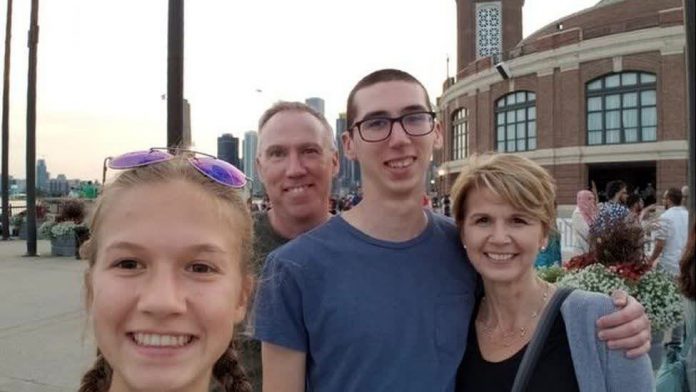 The parents of a man who killed himself last year have filed a lawsuit against trading app Robinhood over his death.

Dan and Dorothy Kearns say their son was unable to get help or support from customer services before he died.

Robinhood said in a statement to the BBC they were “devastated” by Alex’s death and had made improvements.

The app, which allows anyone to buy and trade stocks, says on its website that it is “on a mission to democratise finance” and is currently running an advertising campaign under the slogan of “We are all investors”.

It recently made headlines for limiting sales of some shares to users after US retailer GameStop saw its stock surge.

Speaking to CBS, the parents of Alex Kearns say he began using Robinhood just before he graduated high school.

Mr and Mrs Kearns say they did not know the app had also approved him to buy and sell options – a risky financial instrument – despite a lack of financial experience.

They say their son realised on 11 June 2020 that his account had been restricted by Robinhood amid what appeared to be a negative balance of more than $700,000 on his account.

CBS reports the student received an automated email at 03:26 early the next morning asking him to take “immediate action” to pay more than $170,000 within days.

The family say the 20-year-old emailed customer service several times asking for support and help understanding the figures on his trading account, but only received stock response messages saying they would get back to him.

“They provide no mechanism through a telephone call, through live email service, to get live answers to questions,” a lawyer for the family told CBS.

His parents were told by police later that day, on 12 June, that Alex had died.

“He thought he blew up his life. He thought he screwed up beyond repair,” Mr Kearns said in the interview, in which he said his son had “just needed a little help”.

His parents say an email from Robinhood, received the day after his death, clarified that trading restrictions had been lifted and the trade resolved.

The lawsuit, filed in California state court, said the loss had been covered by other options in his account and accuses Robinhood’s “misleading communications” of leading to “panic and confusion”.

In a statement to the BBC, Robinhood said they have made improvements to their “options offering” since June including how they display buying power and providing more educational materials and revised experience requirements for users.

“In early December, we also added live voice support for customers with an open options position or recent expiration, and plan to expand to other use cases,” a spokesperson said. “We also changed our protocol to escalate customers who email us for help with exercise and early assignment.

“We remain committed to making Robinhood a place to learn and invest responsibly,” they added.