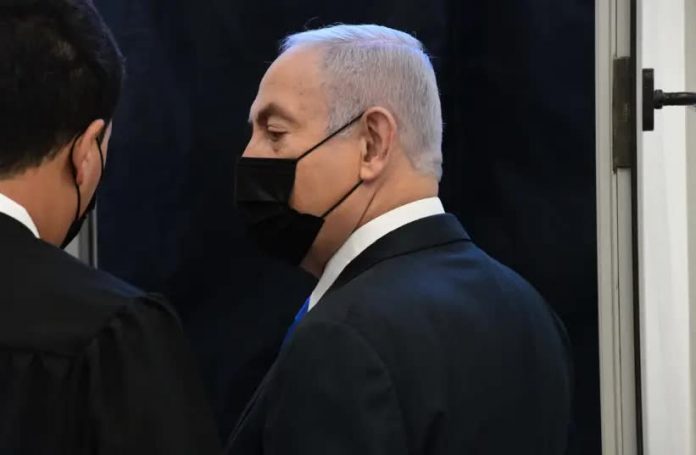 The trial against Israeli prime minister Benjamin Netanyahu at the District Court in Jerusalem. PM Netanyahu is on trial on criminal allegations of bribery, fraud and breach of trust. February 08, 2021.
(photo credit: REUVEN KASTRO/POOL)
The Jerusalem District Court on Tuesday ruled in favor of the state prosecution and against Prime Minister Benjamin Netanyahu on two significant evidentiary issues impacting his public corruption trial, while referring a third issue to the Supreme Court.
In one ruling, Judges Rivkah Friedman-Feldman, Moshe Bar Am and Oded Shaham ruled that Netanyahu’s defense lawyers could not receive an uncensored version of the transcript of an internal prosecution meeting regarding how the police would probe Case 4000, the Bezeq-Walla Affair.
Previously, the court ordered the prosecution to hand over the transcript to the defense, but allowed the state to censor much of the proceedings where the state thought there was no basis to share with the defense.
The key question regarding the transcript is whether Attorney-General Avichai Mandelblit properly personally authorized the police to probe Netanyahu in Case 4000, something required by law since Netanyahu is prime minister.
The prosecution told the court at a hearing on Monday and repeatedly in the past that Mandelblit authorized all police investigative activities and that the meeting minutes support this claim.
Netanyahu’s defense lawyers say that there is no clear authorization in the meeting minutes and requested that the court declassify the censored portions for them to properly argue on behalf of Netanyahu.
The court ruled that, “we did not find that there is a basis to order declassifying the censored portions,” which leaves the defense hanging.
Still, the court will need to rule in the coming weeks on the broader issue of whether Mandelblit’s approval process of police investigations into Netanyahu was sufficient.
In the second ruling on Tuesday, the court refused the defense’s request for access to text messages between Judge Ronit Poznanski-Katz and Israel Securities Authority prosecutor Eran Shaham-Shavit dating back to a Case 4000 detention hearing in February 2018.
In February 2018, Poznanski-Katz stepped down from the Case 4000 detention hearings related to key Netanyahu aides who eventually turned into state’s witnesses, after she was caught exchanging private text messages with Shaham-Shavit.
Photographs of their texting appeared to show them planning how many days of detention various suspects in Case 4000 would get.
Judges coordinating with prosecution lawyers about detention issues outside of the public process in which defense lawyers are present can be grounds for overturning an extended detention order.
Netanyahu’s lawyers argued that the content of the text messages could assist in the prime minister’s defense.
But the judges on Monday said that they found nothing in the 2018 texts relevant to his defense.
The third issue related to interpreting a previous Supreme Court order to give the defense access to certain actions performed on the cell phone of former Walla CEO and key prosecution witness Ilan Yeshua.
The defense made certain demands of the prosecution in light of the earlier Supreme Court order.
But the district court made it clear it was unsure of what the Supreme Court intended and directed the defense to file a motion with the Supreme Court to clarify the issue.
The Jerusalem District Court on Monday said it would not set a calendar for calling witnesses until after March 1, when the prosecution will hand over its initial list of documents and witnesses to the defense.