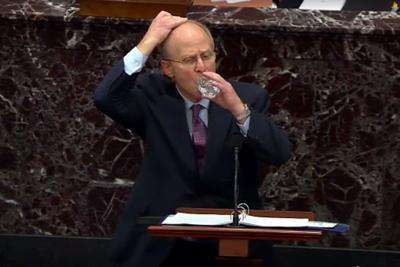 David Schoen, an orthodox Jew, was earlier announced as part of Donald Trump’s defense team for the latter’s second impeachment trial in the US Senate. Schoen, along with Trump’s other attorney, Bruce Castor, joined the team after five lawyers earlier reportedly departed from the employ of the former president.

Tuesday marked the first day of Donald Trump’s second impeachment trial in the US Senate, and two of his lawyers delivered opening arguments that prompted a twitterquake as netizens closely monitored every word of both Bruce Castor and David Schoen. Not only their words were observed and criticised.

In one of the pauses during his speech, Schoen made a move that resulted in question and ridicule from some netizens: when drinking water, the attorney would put his palm on his head and hold it while he was sipping.

While many immediately took the chance to mock Schoen, the situation turned out to be not suitable for sarcasm, as the attorney’s move was made out of a faith-based religious observance.

For reference, David Schoen is covering his head when taking a sip of water and saying a blessing.

Because he is not wearing a kippah, he covered his head with his hand.

It is Jewish ritual, not an odd behavior to be mocked.

​Shortly after the process wrapped up, Schoen said that he did not wear his kippah, or yarmulke, because he was not sure whether it would be appropriate.

“Asked why wearing a yarmulke would offend anyone, Schoen said he did not know whether it would offend anyone but ‘it’s just an awkward thing and people stare at it.'”, CNN correspondent Ali Zaslav tweeted. “Alan Frumin, a former senate parliamentarian, and Schumer’s office both told CNN they are not aware of any rules against wearing a yarmulke on the Senate floor.”

According to the CNN correspondent, Schoen is undecided as to whether he will wear a Jewish religious head covering on Wednesday, but took the opportunity to thank the Senate for being “very gracious about this whole Sabbath observance.”

After the reason behind Schoen’s move was clarified, some netizens who previously mocked him took to Twitter to apologize – while, however, still denouncing him for several of his trial arguments.

Seeing the unfunny reason for the hand/head gesture, and wishing I’d laid off the snark, like my mom taught. Apologies to Mr. Schoen and I’ll do better!

It does appear that it is part of Mr Schoen’ religious observation to cover his head- something that I don’t want to mock- the others having trouble is still fair, but this was meant in fun- not to denigrate his faith.

To those who saw my post about Schoen drinking water…my apology for my ignorance. I would never mock a man for this had I known.

Like, there is PLENTY of stuff to mock this douchebag for, having a habit rooted in religious observance isn’t it