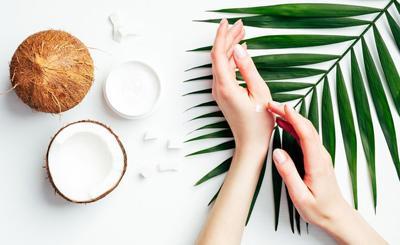 We examine the facts about using coconut oil on your face and hair.

Coconut oil has been touted as a superfood for a few years now despite containing a high concentration of saturated fat. Back in 2015 the wellness industry embraced the fibrous drupe, with everyone from Gwyneth Paltrow to Kourtney Kardashian singing its praises and sales subsequently skyrocketed. But the mighty coconuts day in the sun was short lived after Harvard professor Karin Michels branded it ‘pure poison’ during a lecture at the University of Freiburg.

Expert opinion remains divided about the true superpowers of coconut thanks to its relationship with clogged arteries and trans fat. But while its position on the superfood shelf is up for debate, there have been some interesting findings when it comes to coconut oil and skincare. Is coconut oil a secret elixir for skin and hair health? Dr Louise Wiseman examines the facts:

What is coconut oil?

Coconuts are loosely described as a fruit, a nut or a seed, but they are in fact something called a ‘drupe’ – which is a fruit with a hard stony covering. Coconut oil is simply the oil derived from coconuts that is extracted from the kernel or white ‘meaty’ part of the coconut. Coconuts are truly multifunctional – for centuries they have provided drink, fibre, food and even fuel. Botanical oils have historically been applied to skin long before skincare ranges existed and while it may be relatively new to the wellness scene, residents of the Tropics have incorporated coconut oil into their skin and hair care regimes for thousands of years.

But coconut oil is a contentious superfood because it is basically all fat. It has a much greater saturated fat content than many other natural oils – including lard and butter! Although this means we need to watch how much of it we consume, in terms of application to the skin this can actually be a good thing.

At normal room temperature coconut oil is a solid. The saturated fat in coconut oil is mainly Lauric acid but it also contains fatty acids including Myristic acid, Palmitic acid, Caprylic acid, Capric acid, Oleic acid, Linoleic acid and Stearic acid. These fats are in a linear structure and sit tightly next to each other, but they also melt at around 25 degrees so can easily blend into the skin. Coconut oil also contains vitamins, minerals and plant sterols that all benefit skin health.

The different types of coconut oil

Not all coconut oils are the same. Just like olive oil, coconut oil comes in different preparations. The coconut oil you cook with may not be the same as the one you choose to put on your skin.

Scientific skin studies tend to use Virgin Coconut Oil (VCO). A bit like the manufacture of virgin olive oil, this has been prepared through mechanical or natural means which do not alter the oil. It is extracted from raw coconuts by a method called wet processing. It won’t have been bleached, chemically refined or deodorised in the same way that refined coconut oil is. This is formed by dry processing from dried coconuts. Dry processing may also use undesirable solvents such as hexane.

The coconut oil you cook with may not be the same as the one you choose to put on your skin.

For cooking purposes, dry processed refined coconut oil may be better as it has a higher smoke point. For skin, wet processed virgin coconut oil is preferable. Animal and test tube studies all point to virgin coconut oil having greater antioxidant or free radical fighting potential than refined oil – in other words it is good for neutralising the negative effects of the world around us and our lifestyle.

Proponents of coconut oil as a skincare product often report their skin to be more supple and radiant following repeated use, but this benefit may not be true for everyone. The trouble is, coconut oil sits on top of the skin to seal in moisture, which can lead to congestion for certain skin types. Studies have however shown potential in the following areas when coconut oil is applied topically:

So is coconut oil the secret skin elixir you’ve been searching for? All skins types are different and much of the research into coconut oil is carried out in animal or test tube studies, so it is important to consider the real evidence in these areas before deciding if coconut oil is right for you.

Is coconut oil an effective moisturiser?

Coconut oil has equivalent moisturising properties to mineral oils (paraffin or petroleum-based products) and is also considered to be safe to use. Coconut oil is an occlusive moisturiser, so it sits on the skin to reduce moisture loss rather than penetrating it. Occlusives can be compared by a measure called Transepidermal Water Loss (TEWL). This TEWL is increased in dermatitis or those with dry skin. Studies including those in children have proved that Virgin Coconut Oil was better or equivalent for moisturising in mild and moderate cases of skin dryness than mineral oils.

However, coconut oil is heavy and thick so it can congest sensitive, acne prone skin or the scalp. As a general moisturiser, coconut oil may be better suited to the body rather than the face, as there are less oil glands on the body. It’s also worth applying coconut oil after a shower when pores are less prone to congestion.

🥥 Coconut oil can also be used as a make-up remover, but take care not to apply in excess or drag the eyelids. Always warm the oil first in your hands to liquefy it for easy application.

Can coconut oil protect against infection?

Lauric acid accounts for half of the fatty acids in coconut oil. Monolaurin is derived from this and can theoretically pack a punch in the fight against microorganisms. It has been shown to disintegrate the fatty membrane surrounding some bacteria in lab studies. Cellular studies have also suggested it might work against some viruses and fungal infections. It helped clear skin infections in one trial so is a promising candidate in a time when increasing bacterial resistance to antibiotics is a true problem.

Inflammation or ‘soreness’ in the skin can be a feature of skin conditions such as eczema and psoriasis.

Cultured coconut extract can be an alternative end product in the manufacture of virgin coconut oil. A study in 2017 used this directly on human skin in a lab and found it improved the skin barrier and also reduced inflammation after exposure to UVB light. These properties were attributed to the polyphenols and fatty acids in the extract.

An animal study in 2010 showed Virgin Coconut Oil treated wounds healed much faster than those left untreated. This was due to increased activity of the cells that produce collagen (fibroblasts) and improved blood supply to the wound area.

However before you start slathering coconut oil onto your open wounds, more research is needed within these promising areas of inflammation and wound healing.

Is coconut oil good for acne?

The lauric acid part of coconut oil (and less so the capric acid component) has been demonstrated in lab and animal studies to work against Propionibacterium Acnes – a bacterium that can cause acne.

However, lauric acid and coconut oil have a high comedogenic rating which it what makes coconut oil so creamy and thick, but also makes it likely to block pores causing blackheads, whiteheads and spots. For this reason, dermatologists do not recommend coconut oil to acne prone patients and many people choose not to apply it to the face.

Is coconut oil good for your hair?

Some people use coconut oil as a pre-wash conditioning treatment. Coconut oil has shorter chain fatty acids than sunflower oil and these smaller molecules can pass more easily into the hair structure and potentially form a water blocking layer.

Coconut oil has been suggested to help with hair growth but there is no real proper evidence for this. More so that it would improve condition of hair to allow it to grow without breaking off. Some people also choose to apply coconut oil to the ends of the hair. In acting like a waterproof layer, it should theoretically reduce drying out. Coconut oil may help reduce damage from grooming products and UV exposure but more research is needed in this area.

So is coconut oil the solution to your hair woes? Proceed with caution before using it on your hair or scalp. Coconut oil can be too heavy and thick for fine hair and difficult to wash out. The more ‘virgin’ a coconut oil is the more easily it may block hair follicle openings (sebaceous glands) so it may not be suitable for people with sensitive scalps.

Coconut oil may taste delicious and feel glorious on your skin, but it comes with potential side-effects to consider: