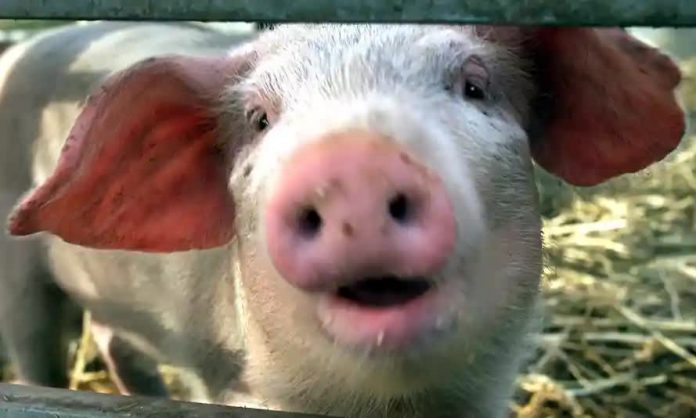 ‘There may be more that pigs are capable of learning and understanding and responding to than we have previously envisaged,’ said the study’s co-author Photograph: DON McPHEE/The Guardian

They’ve long been thought of as smarter than your average animal, but now researchers claim they have taught pigs to use a joystick, suggesting they are even cleverer than previously thought.

Pigs have previously been found to be capable of a host of tasks, including solving multiple-choice puzzles, and learning commands such as “sit”.

Now researchers in the US say they have successfully trained four pigs to manipulate a joystick and control a cursor on a monitor.

“Potentially there may be more that pigs are capable of learning and understanding and responding to than we have previously envisaged,” said Prof Candace Croney of Purdue University, who co-authored the research.

Writing in the journal Frontiers in Psychology, Croney and co-author Dr Sarah Boysen report how they used tasty treats to train the pigs to move the joysticks using their snouts while watching a computer screen.

The researchers then presented the quartet with a video game in which the pigs had to use the joystick to manoeuvre a cursor until it collided with one of four wall-like structures on screen. Upon collision the game made a “bloop” sound and the pig received a treat.

The more successful the pig was, the fewer the number of walls presented in the game.

The team analysed the last 50 trials by each pig on the three-, two- and one-wall scenarios in turn, determining how often the pig hit a target wall with their first cursor movement.

However the pigs grew out of gaming.

“After 12 weeks of training, Hamlet and Omelette were terminated from the experiment because they had grown too large to stand long enough to complete sessions, and also no longer fit within the constraints of the test pen,” the team write.

“That the pigs achieved the level of success they did on a task that was significantly outside their normal frame of reference is in itself remarkable, and indicative of their behavioural and cognitive flexibility,” the researchers write, adding that encouragement from the pigs’ trainer seemed as important as treats, if not more so, in spurring the animals on.

However, the pigs didn’t do as well overall at the game as previously found for non-human primates such as rhesus monkeys.

While the researchers say this could be down to differences in ability to grasp the concept of the game, other factors might be at play, including that the pigs were far-sighted, had limited dexterity, and had to keep looking down and up during the task as a result of moving the joystick with their snout.

The team suggest that touchscreens, rather than joysticks, might prove valuable in further probing the porcine cognitive capabilities.

Dr Emily Bethell, a senior lecturer in primate social cognition, behaviour and welfare at Liverpool John Moores University, who was not involved with the work, agreed it was necessary to adapt experimental set-ups to the animals involved, but said the study added to what many experts already know: “Pigs are smart,” she said.