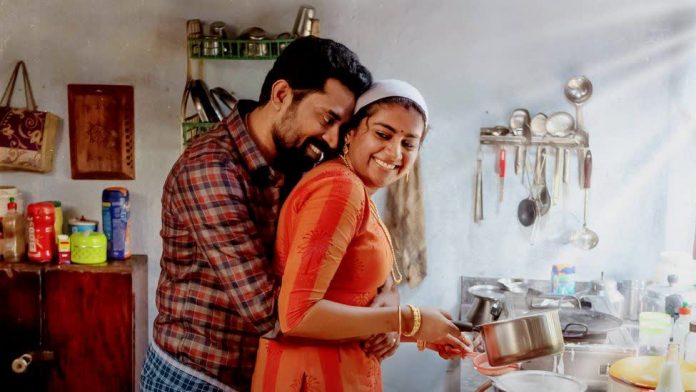 She peels, chops, grinds, cooks, serves, does the dishes, sweeps and mops the floor. He eats. She’s rushed off her feet. He sits calmly, doing yoga – breathing in, breathing out.

That’s the story of The Great Indian Kitchen, a small-budget Malayalam-language film that brilliantly captures the nuances of a patriarchal household and brings to light the horrors of everyday life.

Already being called “the breakout film of the year”, the drama that unfolds in a dark, grimy kitchen in a “respectable”, middle-class home, has become a huge talking point in the southern state of Kerala and on social media and raised many unsettling questions about insidious sexism within homes.

“It’s a universal story. A woman’s struggle in the kitchen is the story of almost all women in India,” says Jeo Baby, the film’s director. “Men think women are machines, for making tea and washing clothes and raising kids.”

The inspiration for The Great Indian Kitchen, he says, came to him in his own kitchen.

“After I got married in 2015, I started spending a lot of time in the kitchen since I believe in gender equality. That’s when I realised that cooking involves a lot of heavy lifting.”

After a while, he says, he started thinking about “how to escape the kitchen – the drudgery, the monotony and the repetitiveness”.

“I felt like I was trapped in a jail. And then I started thinking of all the women who can’t escape and it troubled me.”

The film opens with a wedding. Like a majority of Indian marriages, this one is arranged too – the bride and the groom, played by lead actors Nimisha Sajayan and Suraj Venjaramoodu, have met just once before, surrounded by family, and have shared a stilted conversation.

Once the festivities are over, the guests have left, the daily drudgery starts. The new bride joins the mother-in-law in the kitchen to ensure their husbands are well fed and happy. For, as the popular saying goes, the way to a man’s heart is through his stomach.

Life is equally sordid in the bedroom where she’s expected to provide nightly sex, it doesn’t matter whether she’s willing or not – for the woman’s heart, in India’s patriarchal set up, is of little consequence.

The film – which is streaming on Neestream App after it was rejected by Netflix and Amazon – has won rave reviews from the critics and audiences, especially from women.

“It’s very relatable. There’s no violence in the film, no-one is demonised. It’s a very realistic portrayal of the deeply entrenched insensitivity within our homes,” Clinta PS, assistant professor of English at Christ College in the town of Irinjalakuda, told the BBC.

Prof Clinta says she’s seen her mother and other women struggle in the kitchen because meals in Kerala are “very elaborate”.

“They involve a lot of chopping, washing, grinding and garnishing and take up a lot of time. It can be simplified but we don’t do it. And that’s because a woman is told that her husband and the family are everything, that she exists just to make them happy, she’s told to be a superwoman.”

Kerala is one of India’s most progressive states, it’s often cited as the only place in the country that has achieved 100% literacy and a large number of women here work in formal jobs. But, Prof Clinta says, the Kerala society is as patriarchal as the rest of India.

“We talk about women’s empowerment in Kerala, a large number of women are going out to work, but at the end of the day, the woman has to do all the chores, even in progressive, highly educated families.”

Her own home, she says, is gender neutral and chores are equally shared between her school friend-turned-husband of three years, but in her parental home it’s a very different story.

“Men know about gender equality, but it’s not important in their own homes. Like most Indian men, my father too has double standards. I have heated arguments with him, for being unfair to my mum. He’s a modern progressive man, but at home the burden of housework is borne completely by my mother.”

There’s a popular saying in Kerala, she says, which translates into “you wear progressive slippers, but leave them at the doorstep”.

In India, like in many other parts of the world, the burden of unpaid care work normally falls on women. According to an International Labour Organization report, in 2018 women in India cities spent 312 minutes a day on unpaid care work. Men did 29 minutes.

This is what The Great Indian Kitchen wants to change.

“Women are living in jails created by men. Men are decision makers, women are workers and they don’t even get paid for it,” says Baby. “Through the movie, I want to tell women that you must get out of this trap, why continue to suffer? This is also your world to enjoy.”

It’s going to be a while before real change happens, but The Great Indian Kitchen has certainly started a conversation about gender equality within homes.

A Malayali colleague told me all his friends and family were discussing it in their WhatsApp groups.

“It’s our story,” wrote one. “It puts forth our view,” said another. Yet another wrote that “the film’s brilliance lay in the fact that it did not exaggerate, did not point fingers at anyone and showed us that the soft-spoken, gentle men could be the most toxic ones”. Some speculated that the director of The Great Indian Kitchen must be female.

Some wrote that the most important achievement of the film was that it made men squirm.

One man wrote on Facebook that after watching the film, he was feeling guilty. Another said, “I can’t write anymore about this because I’m the same person [the entitled husband].” Yet another described it as “an eye opener”.

Prof Clinta says it’s a good thing that people have started a dialogue, but it will take years, if not decades, to change ideas entrenched over centuries.

“I discuss these issues with my colleagues and in my class, I try to use my lectures to sensitise my students. The male students theoretically understand gender equality, but I’m not sure they are willing to give up their privileges,” she says.