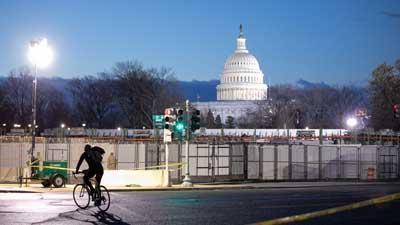 The US Senate continues to proceed with the second impeachment trial against former President Donald Trump, who is accused by Democrats of inciting violence during the 6 January events in Washington, DC.

Senate Majority Leader Chuck Schumer has hinted that the Democratic Party may consider bringing the 14th Amendment to bar former President Donald Trump from holding office in the future if the Senate does not vote to convict him.

“We’re first going to finish the impeachment trial and Democrats will get together and decide where we go next”, Schumer said when asked by reporters on Thursday whether Democrats would consider moving forward with the legislation.

Under the 14th Amendment to the US Constitution, Congress is authorised to bar a person, who has “engaged in insurrection or rebellion” against the country from holding office.

The amendment points out that Congress “shall have power to enforce, by appropriate legislation, the provisions of this article”.

Schumer also lauded the House impeachment managers for making a case against Trump, voicing hope that “it will change minds”.

“It’s hard to look at that and not see the gravity of what happened”, the senate majority leader said, referring to the “never-before-seen” footage of Trump supporters storming the US Capitol on 6 January in an attempt to stop Congress from certifying the results of the 3 November presidential election.

Apart from the videos, the impeachment managers also presented audio recordings of the rioters chanting “hang [then-Vice President] Mike Pence” and “We’re here to count the f***ing votes”, as vindication for the House Democrats’ case against the former POTUS.

Schumer’s remarks followed Democratic Senator Chris Coons mentioning his colleague Tim Kaine being on the forefront of the 14th Amendment push among Democrats in late January.

“What Senator Kaine is talking about is a censure resolution that would also specifically include the elements of the 14th Amendment that lead to disqualification from future office. That’s intriguing to me and something I’m willing to look at the bottom line here is we have to deliver accountability for the events of 6 January”, Coons said.

Democrats will need 17 Republican members to join the case in order to convict Trump, a scenario that is seen by some as something that will never happen.

During the second day of the Trump trial earlier this week, the impeachment managers described the ex-POTUS as the “inciter-in-chief” of the deadly 6 January riots in Washington.

Trump vehemently denies being responsible for the Capitol siege violence, while his legal defence team continues to claim that the impeachment is unconstitutional. The first day of the trial, however, saw the US Senate vote 56-44 to confirm the constitutionality of the case.