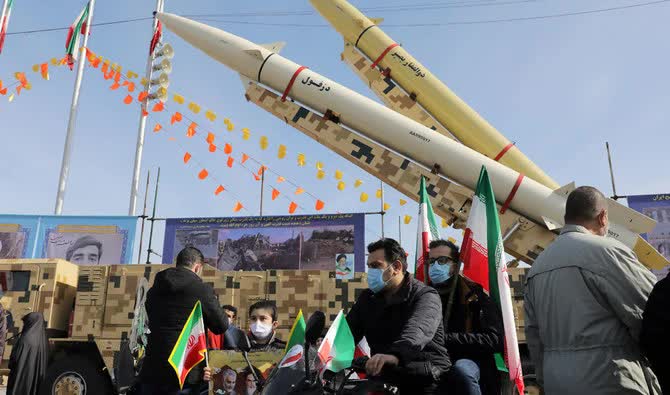 Iranians drive past a missile on their motorbike during a rally marking the 42nd anniversary of the Islamic Revolution, at Azadi (Freedom) Square in Tehran, Iran, Wednesday, Feb. 10, 2021. (AP)

In 2018, US President Donald Trump dramatically withdrew from the Iran nuclear deal and reimposed crippling economic sanctions on Tehran

MOSCOW: Russia has urged Iran to show restraint after it started producing uranium metal in a new breach of limits laid out in Tehran’s nuclear deal with world powers.
“We understand the logic of their actions and the reasons prompting Iran. Despite this it is necessary to show restraint and a responsible approach,” Deputy Foreign Minister Sergei Ryabkov told state news agency RIA Novosti.
The Vienna-based International Atomic Energy Agency (IAEA) said on Wednesday that it had verified the production of 3.6 grams of uranium metal at a plant in Iran.
The landmark deal — reached in 2015 by the US, China, Russia, Germany, France and Britain — contained a 15-year ban on “producing or acquiring plutonium or uranium metals or their alloys.”
Iran said last month it was researching uranium metal production, a sensitive issue because uranium metal can be used as a component in nuclear weapons.
Ryabkov said Iran’s move demonstrated Tehran’s “determination not to put up with the current situation,” after it warned that time was running out for US President Joe Biden’s administration to save the agreement.
In 2018, US President Donald Trump dramatically withdrew from the Iran nuclear deal and reimposed crippling economic sanctions on Tehran.
Trump’s successor Biden is seeking to revive the agreement, but the two sides appear to be in a standoff over who acts first.
Ryabkov’s remarks came as Iran’s paramilitary Revolutionary Guard on Thursday began a ground forces drill near the Iraqi border, state TV reported.
The report said the annual exercise was ongoing in the southwest of the country and had aimed at readiness and assessment of forces.
Drones and helicopters will be used in the drill, too.
In recent months, Iran has increased its military drills as the country tries to pressure President Biden over the nuclear accord.
In January, the Guard conducted a drill and launched anti-warship ballistic missiles at a simulated target in the Indian Ocean.
A week before that, Iran’s navy fired cruise missiles as part of a naval drill in the Gulf of Oman, state media reported, under surveillance of what appeared to be a US nuclear submarine. That came after speedboats parade in the Gulf and a massive drone exercise across the country.