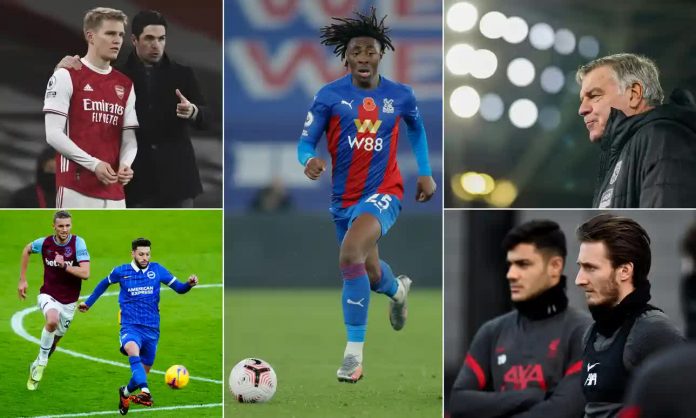 The  Guardian-Will Unwin and Barry Glendenning

Sunday’s shellacking by Manchester City will have further dented Liverpool’s confidence, especially at the back where Alisson made mistakes, Trent Alexander-Arnold suffered at the hands of Raheem Sterling, and Fabinho gave away a penalty. Using Jordan Henderson as a centre-back has been a useful stop-gap for Jürgen Klopp but with the title slipping away and a key Champions League tie coming up, the manager will need to decide who can best fit alongside Fabinho. Ozan Kabak has experience in Europe from his time at Galatasaray as a teenager, while Ben Davies is a man with an in-depth knowledge of the English game. Klopp will have wished for a midweek FA Cup match to try at least one of them out, but they are likely to debut against Jamie Vardy, arguably the smartest striker in the Premier League. It will be a baptism of fire for either, but how the chosen centre-back does may be crucial for the rest of Liverpool’s season. WU

Some of José Mourinho’s finest moments at Spurs, although there have not been too many, have come in matches against Pep Guardiola. The Portuguese’s rivalry with the Manchester City coach stretches back to when he was overlooked for the Barcelona job in favour of the Catalan. In his two games in charge against City, Mourinho has secured well-deserved 2-0 victories at home, playing smartly on the break against a struggling City defence. City’s back four is more settled now, giving up few goals, meaning the task should be far more difficult at the Etihad. It is the Spurs defence which is more susceptible at the moment, leaving Mourinho to chop and change on a weekly basis in order to find a combination that could hold the opposition at bay. Harry Kane and Son Heung-min have had the better of City in recent meetings, while City have ripped apart plenty over the past three months. Whoever has the sturdier backline on Saturday should win the match and, if it is Guardiola’s side, it will be proof of City’s dynamic shift. WU

3) A full Arsenal debut for Ødegaard?

Following two substitute appearances since his arrival on loan from Real Madrid, it would be no great shock to see Martin Ødegaard make his full debut for Arsenal when they entertain Leeds. Despite missing a glorious chance to equalise, the Norwegian impressed in defeat during a 25-minute appearance against Aston Villa, replacing Cédric and slotting in beside Emile Smith Rowe in midfield as Bukayo Saka moved to left-back. Having picked Smith Rowe for each of Arsenal’s past nine top-flight games, Mikel Arteta may decide to play Ødegaard and rest the 20-year-old in favour of adding additional steel to combat the swashbucklers of Leeds. Should he do so it promises to be a frenetic game, one that provides an intriguing test of Ødegaard’s Premier League mettle. BG

4) A surprise approach from the Baggies?

As Sam Allardyce’s record of never being relegated from Premier League looks set to slip away long before May, the former England manager will have to get his kicks any way he can in the closing stages of the season. Allardyce has always taken great pleasure in getting one over the bigger clubs and three points against Manchester United would be a tonic after a desperate run since arriving at the Hawthorns. Everton showed that pace and physicality can unsettle the United defence, two things that, conveniently, the Baggies have to call on. Thus far Allardyce has played a brand of football that few can be shocked by, as they have drifted 11 points from safety. The surprise of attacking intent could give West Brom an advantage against a side who have looked flustered under pressure but that will score goals, meaning the Baggies will need to find the net to get anything out of the game. WU

Almost everyone who watched Everton’s midweek FA Cup white-knuckle ride against Tottenham will have enjoyed it, but Fulham’s players would have been more pleased than most by the sight of Richarlison and assorted teammates dropping to the turf with exhaustion at the end of 120 minutes. Scott Parker’s side have played a lot better than the eight points they have taken from the past 36 available would suggest, but have still not managed to register a win since late November. With the games coming thick and fast, a match against an inconsistent Everton side still likely to be mentally and physically fatigued following their exertions is surely must-win for Fulham, who will doubtlessly be practising their set-pieces diligently before Sunday’s game. As an added bonus, their hosts are likely to be without chief goal-getter Dominic Calvert-Lewin, who limped down the tunnel with a hamstring injury during the win against Spurs. BG

6) Brighton’s need for creativity against Villa

Brighton have not scored more than once in a Premier League game since 2 January. They have, however, only lost one of six matches in that period, a 1-0 defeat at Manchester City, while beating Tottenham and Liverpool. The success has been built on a very sturdy defence, with Dan Burn, the galloping 6ft 7in left wing-back, a rampant success. Adam Lallana has been forced to to watch most of the action from the bench or stands, but he could be the man to add creativity to a side short on goals, especially with the prospect of Danny Welbeck also being available to start after his spell on the sidelines. Neal Maupay and Aaron Connolly are very willing runners but have lacked the service to make the most of their movement, something Lallana can provide at his best. But he is unlikely to get up to speed performing cameos. WU

Just as things were starting to look up for Steve Bruce in the wake of wins over Southampton and Everton – either side of a decent showing in defeat against Palace – the Newcastle manager was dealt a hammer blow by news that Callum Wilson will be out for up to two months with a hamstring injury. With 10 of his side’s 25 league goals to his name this season, the striker has scored more than twice as many as any of his teammates, and also leads the club’s assist table with five to Allan Saint-Maximin’s three. Already suffering an injury crisis at the back, the last thing Bruce needed was one up front to boot, particularly with a trip to Chelsea looming. BG

8) Palace to go Eze on Burnley

Without Wilfried Zaha against Leeds on Monday, Crystal Palace looked incapable of unlocking defensive doors to create moments of danger. Roy Hodgson’s side managed just 31% possession and three shots on target in 90 minutes, a sign of their bluntness in the final third. Against Burnley, Palace can expect to have more of the ball, but they still need a more efficient plan to make the most of it. Eberechi Eze could be the man to provide the required threat; he has already shown this season that he has the dribbling ability to cut open defences and the composed finishing to give the Eagles hope. Rather than using him on the wing to attack full-backs, it might be better to use him centrally. Palace’s strikers have scored six goals between them this season, so a change in approach that gives them more support could be just what is needed. WU

For all the justified praise he has earned for his shrewd management of West Ham over the past two seasons, David Moyes appears to have erred on the side of caution in failing to bring in a striker during January, despite reports his employers had made funds available for such a purchase. With Sébastien Haller sold to Ajax, West Ham are now entirely reliant on Michail Antonio, who for all his qualities as a frontman is injury-prone. Without him, West Ham looked toothless against Manchester United on Monday and they will need to keep him out of the physio room if they are to maintain a push for Europe. Of course, West Ham know better than most that spending big money does not always guarantee a return, something their next opponents, Sheffield United, have also learned. The Blades invested a club record £23m last year on Rhian Brewster, an undeniably gifted youngster who has since failed to score for his new side and looks bereft of confidence despite recent backing from his manager. BG

The two sides, or at least versions of them, played each other on Thursday in the FA Cup but we can expect plenty of changes come Sunday. Southampton have suffered a crisis of injuries and confidence recently, suffering five straight league defeats, including the 9-0 drubbing at Old Trafford. Adding up the squad numbers on Ralph Hasenhüttl’s bench is a challenge for even the most efficient home-schooler, with reserve and academy players being promoted out of necessity. Despite only finishing with nine men, Newcastle still bested Saints last weekend. Although the bench consists of scholars, the starting XI was more than experienced enough to get something at St James’ Park. Now is not the time to bemoan misfortune: instead the key men need to step up and show what they can do to avoid slipping further down the table. WU

The darkly soothing compulsion of ‘doomscrolling’