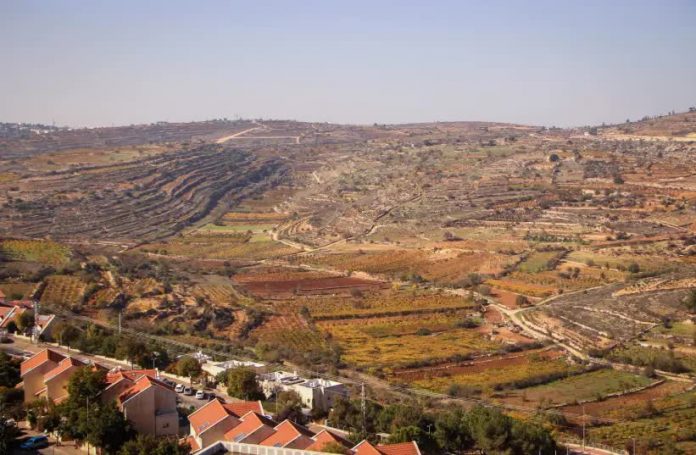 “We believe it is critical to refrain from unilateral steps that exacerbate tensions and that undercut efforts to advance a negotiated two state solution.”

View of the Jewish settlement of Efrat and the surrounding fields, in Gush Etzion, West Bank, on December 1, 2020.
(photo credit: GERSHON ELINSON/FLASH90)
The US on Thursday called on Israel to refrain from settlement activity and for the Palestinian Authority to halt payments to terrorists and their families.
“We believe it is critical to refrain from unilateral steps that exacerbate tensions and that undercut efforts to advance a negotiated two state solution,” US State Department spokesman Ned Price told reporters in Washington.
He clarified that unilateral steps include: “annexation of territory, settlement activity, demolition, incitement to violence [and] the provision of compensation for individuals in prison for acts of terrorism.”
Price added: “We continue to emphasize that it is critical to refrain from all of those activities.”
He spoke in response to a question about the Keren Kayemeth LeIsrael – Jewish National Fund (KKL-JNF) pending decision to purchase private Palestinian property to help accelerate West Bank settler building.
The KKL-JNF is a private organization, but Price seized the opportunity to make a global statement about the Biden administration’s policy with respect to unilateral steps in the West Bank, including Israel’s demolition of illegal Palestinian structures.
One reporter quizzed Price on whether the Biden administration planned to rescind the Trump administration’s recognition of the legality of settlement activity under international law.
Price responded by repeating the same principled point. “We believe it’s critical for Israel and the Palestinian Authority to refrain from unilateral steps that exacerbate tensions and undercut efforts to advance a negotiated two-state solution,” he said.
Although the Biden administration has not put forward any plans to hold direct Israeli-Palestinians negotiations on core issues of the conflict and or to arrive to a two-state solution, Price clarified that such talks were necessary to determine the status of Jerusalem.
“The ultimate status of Jerusalem is in fact a final status issue,” Price said. He spoke after a journalist pressed him about US Secretary of State Antony Blinken refusal to respond to the question as to whether he believed east Jerusalem would be the capital of a future Palestinian state during an interview earlier in the week with CNN.
Blinken in that same interview clarified that he believed Jerusalem is the capital of Israel.
The Trump administration had declared US recognition of Jerusalem as Israel’s capital. It also allowed American citizens born in Jerusalem to register their place of birth as Israel, a move that had been denied to them until 2020.
The Biden administration has been clear that it has no plans to reverse that declaration on Jerusalem as Israel’s capital. Price told reporters Thursday that the passport policy also remained intact.
“We have no changes to announce to the current guidance on passports,” he said.
But Price clarified that the Biden’s administration position on Jerusalem was transient and that ultimately the status of Jerusalem would be determined by direct talks between Israel and the Palestinians.
“The ultimate status of Jerusalem is, in fact, a final status issue which will need to be resolved by the parties in the context of direct negotiations,” Price said.
Separately, Price did not reject the idea that the US would resume financial assistance to the Palestinians only if the PA refrained from pushing forward with its drive to sue Israeli for war crimes before the International Criminal Court.
“We have spoken here before about our intent to provide assistance to the benefit of all Palestinians, including to Palestinian refugees. We are in the process of determining how to move forward with the resumption of that assistance consistent with U.S. law, consistent with our interests,” Price said.
The reporter pressed him, asking, “But you’re not going to make that contingent on them refraining publicly from going to the [ICC]?”
Price respond: ‘We are going to make it contingent on our values and our interests.”

How product placements may soon be added to classic films

After nearly 100 days in office, what do Americans think of Biden? -poll