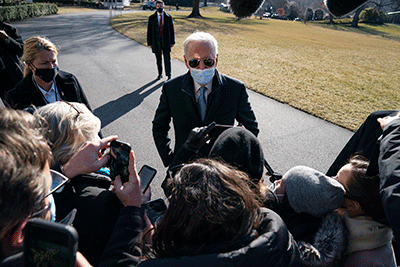 https://www.bbc.com-US President Joe Biden has said his predecessor Donald Trump’s acquittal for inciting mob violence is a reminder that “democracy is fragile”.

Seven Republicans joined Democrats in voting to convict, falling short of the two-thirds majority needed to do so.

Mr Biden said the charge, relating to Mr Trump’s role in the Capitol riot last month, was “not in dispute”, while seeking to move on from the process.

Mr Trump has welcomed his acquittal, calling his impeachment a “witch hunt”.

In the Senate on Saturday, the trial ended with a 57-43 vote in favour of conviction.

The vote split largely along party lines, with the seven Republicans joining the Senate’s 48 Democrats and two independents in voting to convict.

Democratic prosecutors argued he stoked the mob with false claims the election was stolen. Mr Trump’s lawyers denied his words amounted to incitement, and said the Senate should not try a former president.

Impeachments of US presidents are rare. Only two other presidents have been impeached, while Trump is the only man to face the process twice.

Responding to the acquittal, President Biden said: “While the final vote did not lead to a conviction, the substance of the charge is not in dispute.

“This sad chapter in our history has reminded us that democracy is fragile. That it must always be defended. That we must be ever vigilant. That violence and extremism has no place in America. And that each of us has a duty and responsibility as Americans, and especially as leaders, to defend the truth and to defeat the lies.”

Mr Biden has kept his distance from the impeachment process, not watching the trial live. Aides were reportedly worried that it would distract from his early plans for office.

In his reaction, Mr Trump called the trial “yet another phase of the greatest witch hunt in the history of our nation”.

A conviction could have seen him barred from elected office. Mr Trump’s statement hinted he would continue to play a role in US politics.

“Our historic, patriotic and beautiful movement to Make America Great Again has only just begun,” he said.

After the vote, the senior Republican in Congress, Senator Mitch McConnell, said Mr Trump had been “responsible” for the assault on the Capitol.

This was despite him voting against conviction, arguing it was unconstitutional now that Mr Trump was no longer president. Mr McConnell was instrumental in delaying Mr Trump’s trial until after he left office, on 20 January.

One of the seven Republicans to break ranks was Susan Collins, who argued by “subordinating the interests of the country to his own selfish interests, [Trump] bears significant responsibility for the invasion of the Capitol.

“The abuse of power and betrayal of his oath by President Trump meet the constitutional standard of ‘high crimes and misdemeanours’ and for those reasons I voted to convict Donald J Trump.”

The Democratic Speaker of the House of Representatives, Nancy Pelosi, called Republicans who did not support conviction “cowardly”.

That the bulk of Republicans backed the former president suggests his enduring influence over the party and its voters.

Republican Senator Ted Cruz said the trial “merely satisfied Democrats’ desire to once again vent their hatred of Donald Trump and their contempt for the tens of millions of Americans who voted for him”.

Trump ‘did not emerge unscathed’

At its most basic level, this is a win for the former president. He is still eligible to run for president again in 2024, if he so chooses. His base, by all indications, is still largely intact. Both in the House of Representatives and in the Senate, most Republican officeholders opposed the impeachment proceedings. Those who broke ranks are already facing ferocious criticism and, in some cases, formal reprimands from their Republican constituents.

Trump did not emerge from this impeachment trial unscathed, however. One of the most memorable portions of the prosecution case by the impeachment managers were the new videos of Trump’s supporters, wearing Make America Great Again hats and waving Trump flags, ransacking the Capitol.

Those images will forever be associated with the Trump brand. Every rally he holds from here on will evoke memories of that riot. It may not cost him among the Republican rank and file, but independent voters – and moderates – are unlikely to forget.