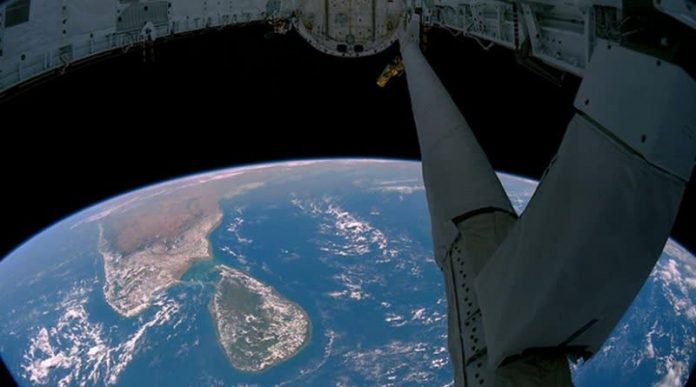 View of South India and Sri Lanka from the payload bay of the Space Shuttle in earth orbit. Source: NASA, Wikipedia Commons.

\Though India failed to get the East Container Terminal (ECT) project in Colombo port, it is now well on the way to bagging the West Container Terminal (WCT) project and also three power projects in Jaffna. It has successfully convinced the Gotabaya Rajapaksa government that it will be unwise to ignore India’s interests in its relations with China.

After yielding to Sinhalese nationalist pressure not to give the ECT project to India, the Sri Lankan government offered the WCT in which the designated Indian party is to hold 85% stake. This is much higher than the stake offered to India and Japan (49%) in the case of the ECT. It also matches China’s stake in the adjacent Colombo International Container Terminal (CICT).

Meanwhile, another problem had arisen for India in Jaffna in Northern Sri Lanka. The Lankan government had decided to award three renewable energy projects there to a Chinese joint venture company MS/Sinosar-Etechwin. The power plants were to be set up in three islands off Jaffna, namely, Delft, Analativu, and Nainativu.The plants were to use a mix of  solar, wind, and other renewables. The ADB was to give a loan of US$ 12 million for the project.

India strongly objected to the grant of the project to a Chinese company as one of the island locations was only 48 kms from Rameswaram. India feared that the Chinese would spy on India from there.

The Lankan government argued that the Chinese company was better qualified than the Indian party which had also tendered for the project,  and that the ADB had sanctioned the deal and extended a loan of US$ 12 million. But this did not wash with India which continued to harp on the security threat to it.

While a section of the Lankan government felt that the India’s objection abridged Sri Lanka’s sovereignty and independence and therefore it deserved to be ignored, the dominant section felt that India’s case must be accommodated in the larger interest of having good relations with the Big Brother and only neighbor. Sri Lanka’s own security was heavily dependent on India, it was pointed out.

The media on Sunday quoted Lankan Power Minister Dallas Allahaperuma as saying that the Indian High Commissioner Gopal Baglay had met him and offered an Indian “grant” of US$ 12 million for the three energy projects in Jaffna islands. India suggested that Sri Lanka could itself build the power plants with Indian collaboration of course.

Allahaperuma accepted the proposal and promised to put it up at the next weekly cabinet meeting. The minister also informed the media that the original plan to give the project to a Chinese company had not yet been put up in the cabinet.

“If we think of our citizens, receiving a grant is an advantage and it will also ease the burden on the Treasury, because if we go ahead with ADB funds, the Treasury will have to repay those in the future,” the Minister said.

On the Sri Lankan offer to get India’s help to build the West Container Terminal, there appears to be no visible movement. Sri Lankan officials and political leaders who want India-Lanka relations to be on an even keel want both the Indian and Sri Lankan governments to move quickly and start the work on the project. Any delay would activate the nationalist elements, who are basically anti-Indian, they fear. In fact, a port workers’ union leader has already told the press that the workers would go on strike if the WCT project is assigned to India.