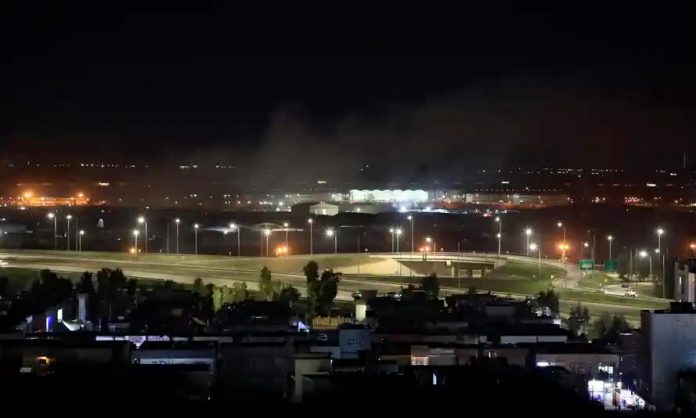 Analysis: Fiery rhetoric of Trump era is gone, but flare-up in northern Iraq is a microcosm of tension to come

The attack on Erbil airport was likely aimed as much at testing Biden’s mettle as at causing damage. Photograph: Thaier Al-Sudani/Reuters

Joe Biden faces his first real test with Iran. A barrage of 15 rockets in northern Iraq that struck a US base, killing a military contractor and wounding a soldier, were likely aimed as much at testing the new president’s mettle as they were at causing damage.

In the hours after the attack on Erbil airport, where much of the remaining US presence in Iraq is based, a Shia group loyal to Iran felt emboldened enough to claim it. Although the boast was from a hitherto unknown group, it left no doubt who was behind the first such barrage since Biden’s inauguration.

The declaration struck a very different posture to that of the final months of Donald Trump’s presidency, when Iran and its proxies remained mostly taciturn, carefully weighing every step. This time, the strike was openly dedicated to Abu Mahdi al-Muhandis, the former head of Iranian proxy Kata’ib Hezbollah, and Qassem Suleimani, the most powerful Iranian in Iraq for more than a decade until both were killed in a Trump-authorised airstrike 13 months ago.

Within hours, the vehicles used to launch the rockets and the site from where they were fired was found – only 7km (4.3 miles) from Erbil airport, and well inside the region of Iraq secured by Kurdish forces. The implications were clear: the safe zone had been breached and such an attack could happen again. One of the last redoubts in Iraq was now vulnerable. It was now Biden’s move.

Biden and his senior officials condemned the attack in pro forma terms, pledging solidarity with Iraq’s Kurdish leadership and vowing to identify the rocket team. The fiery rhetoric of the Trump years was gone, and so was the uncertainty. Biden, well versed in the post-invasion chaos of Iraq and the ascendant influence of its eastern neighbour, has flagged a resumption of more traditional diplomacy – with return to the Iranian nuclear deal a regional centrepiece.

Signing the nuclear pact, which gave Iran sanctions relief in return for scaling back its attempts to enrich uranium to a standard that could be used to make a nuclear weapon, was the signature deal of the Obama administration. It was shredded by Trump, who instead reimposed even tighter sanctions under a policy that hawks in his regime called “maximum pressure”, and threatened large-scale retaliation any time rockets were fired at Baghdad or Erbil.

Although divergent, the approaches had one one thing in common: viewing a reckoning of some sort with Iran as being central to multiple regional flashpoints. Iran has stakes in Lebanon, where Iranian ally Hezbollah remains dominant and the country unable to form a government yet again, as well as war-ravaged Syria and Yemen, where Biden this month overturned Trump’s decision to designate the Houthis, who are supported by Tehran, as a terrorist group.

It also remains at odds with regional heavyweight Saudi Arabia where, three days after Biden took office, drones carrying missiles penetrated its airspace and bombed at least one palace.

US intelligence officials believe that attack was likely launched by Iranian proxies, possibly from Iraq, and viewed as a test of solidarity between Biden and Riyadh. Three weeks later, with no phone call from the new US leader, Iran may feel it has its answer, and is now testing its boundaries on another front, as well attempting to shore up its negotiating position, when the two sides eventually sit down again.

An opening position on that score may have been declared on Tuesday night, with a claim of responsibility for the Erbil attack that included a demand for the US to leave Iraq, and a warning to Kurdish leaders, as well as a taunt that other rockets have been stored inside Erbil.

The flare-up in northern Iraq is a microcosm of tension to come elsewhere in the region, the pinnacle of which is more likely to be fought out at the negotiating table.