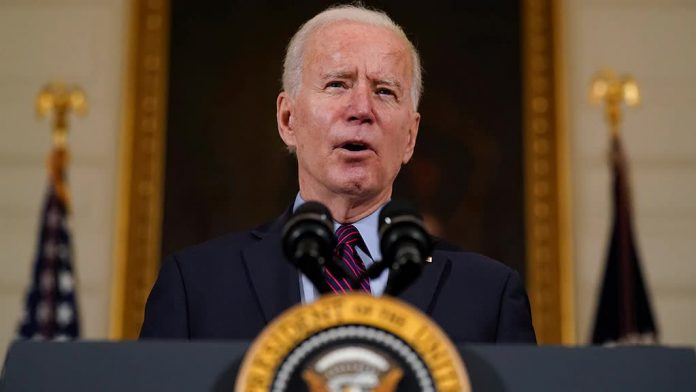 President Joe Biden has taken part in his first town hall since his inauguration in January, answering questions from CNN’s anchor Anderson Cooper and audience members in Milwaukee, Wisconsin, seemingly anxious to avoid mentioning the former President Donald Trump by name and referring to the 45th President as “the former guy”.

President Joe Biden took questions on a plethora of issues, including the coronavirus pandemic, vaccine rollout, school reopenings, economic reboot and the minimum wage at CNN‘s town hall in Milwaukee, Wisconsin, on 17 February – his first such event since his January inauguration as POTUS.

As Biden made use of the opportunity to pitch his COVID-19 relief plan to the nation, he tentatively pointed to “next Christmas” as a possible time where the nation could be under a “very different circumstance”. He vowed that “by the end of July, we’ll have over 600 million doses, enough to vaccinate every single American.”

Joe Biden also said during the town hall event that all of the living former presidents have called him, “except one”.

“They’re private conversations… But, by the way, all of them, with one exception, picked up the phone and called me as well,” said Biden, who avoided mentioning his predecessor by name.

When asked outright about the Senate’s acquittal of Trump, Biden replied:

“Look, for four years, all that’s been in the news is Trump. The next four years I want to make sure all the news is the American people… I’m tired of talking about Trump. It’s done.”

Biden added that any decision to prosecute the former president for anything he did while in office will be left up to the Department of Justice.

Donald Trump was acquitted in his second impeachment trial on 13 February, with lawmakers seeking to oust him failing to reach the necessary two-thirds supermajority.

The second impeachment was launched just days after the ex-president’s supporters stormed Capitol Hill in a bid to stop the congressional certification of Joe Biden’s victory in the 2020 presidential election.

Netizens were split in their reaction to Joe Biden’s words. Some tended to agree that it was time to ‘turn the page’ on Trump.

Q: Do you agree w/ Speaker Pelosi that Republicans who voted to acquit Trump are cowards?

Pres Biden: “For four years, all that’s been in the news is Trump. The next four years I want to make sure all the news is the American people. I’m tired of talking about Trump. It’s done.”

I do agree. That man is past. He lost. Let’s stop putting energy into him by never taking about him.

Best thing to do is ignore him. Let the Justice Department and the FBI and the CIA handle him. If media winds down his free advertising, his reach would be smaller.

It’s long past time. I get that he’s going to dominate the news doing an impeachment trial, but it’s over. There will be some criminal and civil trials. Media, please stay away! Wake me when there‘a a verdict. Otherwise, the page is turned.

​Some comments on social media, however, pointed out that Donald Trump would be a ‘talking point’ for a long time yet.

And yet here you are still talking about him…

Then stop. You have the power joe, stand up to your handlers and say enough is enough. I hate seeing the elder abuse.

I think we’re ALL sick of talking about Trump. But the reality is … he will be “around” for years to come!!

Trump is like Kevin Bacon. Every conversation leads back to him.

America is like the stalker ex-girlfriend that can’t stop watching her ex’s every move. 😂

Well Joe,You don’t have to talk about him. Why don’t you talk about the 50+ executive orders and the loss of jobs.

A “Do you agree” question requires a yes/no answer.
Question wasn’t, “How many years has Trump been in the news?” but Biden answered like that was the question.
It’s called deflection.
Be aware when this happens, folks.
Most politicians do this to avoid answering truthfully.

Trump right now is by far the favorite to be the GOP nominee in 2024 and 3/4 of Republicans think he was illegally denied a second term. Sorry, pretending he doesn’t exist doesn’t make the problem go away.