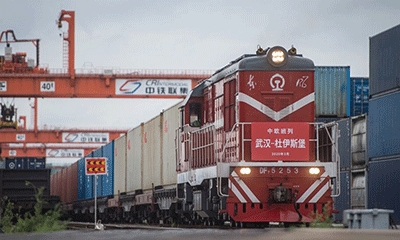 China surpassed the US becoming the European Union’s largest trading partner in coronavirus-plagued 2020. With the EU-China Comprehensive Agreement on Investment (CAI) making progress while the future of transatlantic trade remains unclear, experts say bilateral ties between China and EU members will be further cemented this year.

Latest data from the EU statistics agency Eurostat showed that the EU’s trade volume with China reached 586 billion euros ($711 billion) in 2020, compared to 555 billion euros for the US.

The EU’s imports from China increased by 5.6 percent while exports to China went up 2.2 percent. At the same time, the bloc’s trade with the US recorded a significant drop in both imports (-13.2%) and exports (-8.2%).

The supremacy of China came after it suffered from the coronavirus pandemic during the first quarter but recovered vigorously with consumption even exceeding its level of that a year ago at the end of 2020, AFP reported, which helped drive sales of European products, particularly in the automobile and luxury goods sectors. Meanwhile, China’s exports to Europe benefited from strong demand for medical equipment and electronics.

“Last year has witnessed special trading between the EU and China under the raging COVID-19 pandemic. Many virus-fighting medical supplies are transported to the EU over the steadily operating China-Europe freight trains,” said Cui Hongjian, director of the Department of European Studies from the China Institute of International Studies.

A record 12,400 China-Europe freight train trips were made in 2020, up 50 percent from the previous year, according to China’s railway operator, facilitating global cooperation to fight COVID-19.

The Eurostat data coincided with China’s official data published in January, which showed trade with the EU grew by 5.3 percent to 4.50 trillion yuan ($696.4 billion) in 2020.

“The EU’s economic reliance on Chinese products, especially virus prevention products, have protruded last year, but as the EU has called on building up its own supply chain, it’s still a question mark on whether China’s throne in trading with the EU will be maintained in 2021,” Cui told the Global Times on Tuesday.

“But it is for certain that the CAI agreement, which completed negotiations at the end of 2020, will boost more confidence regarding European companies in China as the latter pledges to provide more access to European investors, and bilateral ties will be further cemented,” Cui added.

The CAI agreement will go through further legal and technical revisions before it is submitted for approval by the European Council and European Parliament, a process the EU has said it wants completed by early 2022, according to media reports.

“To estimate optimistically, the agreement will be signed in the first half of 2022,” Cui noted.

The US losing its throne to China in trade with the EU in 2020 was not only due to the global health crisis, but also impaired transatlantic trade under the Trump administration, which usually waved the tariff stick.