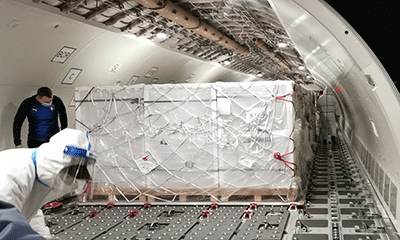 The first batch of Chinese COVID-19 vaccine exports to Hungary is due to arrive on Tuesday after a charter plane sent by the Hungarian government arrived in Beijing to pick up the vaccines.
Pakistan became the first country to receive the third batch of Chinese COVID-19 vaccines, as it approved on Monday the final phase of clinical trials of the Chinese vaccines, co-developed by the Institute of Microbiology of the Chinese Academy of Sciences and Zhifei Longcom in East China’s Anhui Province, diversifying China’s vaccine exports.

To realize China’s pledges of making COVID-19 vaccines a global public good, and at the request of the Pakistani army, the PLA offered it a batch of COVID-19 vaccines produced by China’s Sinopharm on February 7.

Another producer CanSino’s also obtained emergency use approval for its adenovirus vector recombinant vaccine in Pakistan on Friday.

The first batch of Chinese COVID-19 vaccine exports to Hungary is due to arrive on Tuesday after a charter plane sent by the Hungarian government arrived in Beijing to pick up the vaccines.

A batch of COVID-19 vaccines donated by China arrived at Robert Mugabe International Airport in Zimbabwe’s capital on early Monday morning. The 200,000 doses of the vaccine made by Sinopharm make up the first batch Zimbabwe has received as it steps up efforts to curb the spread of epidemic.

As more countries pin their hopes on Chinese COVID-19 vaccines to contain the outbreak, experts warn that the harm counterfeited vaccines could do to the reputation of Chinese-produced vaccines.

The Supreme People’s Procuratorate on Monday asked procuratorates across the country to cooperate with public security authorities to crackdown on crimes involving the production and sale of counterfeit COVID-19 vaccines. As of Wednesday, prosecutors nationwide had approved the arrest of 70 suspects in 21 counterfeit vaccine cases.

More than 80 people were arrested and 3,000 doses of fake COVID-19 vaccines were confiscated in early February in a special crackdown on vaccine-related crimes. The suspects had been profiting from the illegal manufacturing and sales of the vaccines since September 2020.

The investigations involved a joint action by police in Beijing and East China’s Jiangsu and Shandong provinces and other regions.

The police investigations showed much of the counterfeit vaccines was merely a saline solution, that was scalped at a very high price. Some of the fake vaccines were smuggled out of the country, which has tarnished Chinese brand vaccines.

Alleged counterfeiters have even provided individuals with fake documents showing that they belong to an authorized cohort that is entitled to receive real vaccines.

A Chinese vaccine producer told the Global Times that the company is in close communication with public security departments to help track counterfeit vaccines using its brand names and packaging.

A Beijing-based vaccine observer who asked not to be named told the Global Times the crackdown on counterfeit COVID-19 vaccines is important as the vaccines are important to containing the virus in the world.

“Various departments should strengthen coordination in fighting against crimes involving vaccines, and they should use big data to strictly monitor the registration and whereabouts of every dose of vaccine,” said the expert, adding “Considering the huge demand, authorities should expand legitimate vaccination channels for the public as soon as possible, leaving no room for illegal peddlers.”