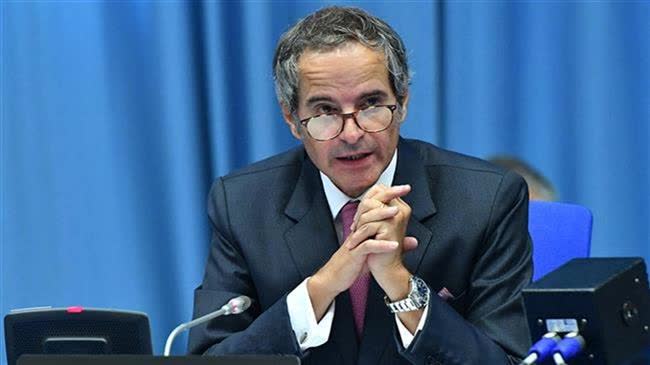 Director General of the International Atomic Energy Agency Rafael Mariano Grossi delivers his opening statement to the IAEA Board of Governors on September 14, 2020. (Photo by iaea.org)

https://www.presstv.com-The head of the International Atomic Energy Agency (IAEA) has offered to visit Iran over Tehran’s decision to suspend the IAEA’s snap inspections.

IAEA Director-General Rafael Grossi announced on Tuesday that he was ready to visit Iran after Tehran informed the UN body of its decision to end voluntary implementation of the Additional Protocol to the nuclear Non-Proliferation Treaty (NPT) Safeguards Agreement.

Grossi said in a statement that the aim of the visit was to find a solution for the agency to continue to carry out its verification work under the 2015 Iran nuclear deal, officially known as the Joint Comprehensive Plan of Action (JCPOA).

The Iranian Foreign Ministry announced on Monday that Tehran would end its voluntary implementation of the Additional Protocol to the the NPT should the other parties to the JCPOA fail to honor their commitments by the deadline of February 21.

The announcement came more than two months after the Iranian parliament passed a law to further accelerate the development of the country’s nuclear program and counteract unilateral sanctions imposed on the country by the United States.

According to the new law, the Iranian administration is required to suspend more commitments under the nuclear deal if the US sanctions are not eased by February 21.

The law tasks the Atomic Energy Organization of Iran (AEOI) with producing and restoring at least 120 kilograms of enriched uranium with a 20-percent purity level every year and also enrichment beyond 20 percent if the country’s peaceful nuclear activities demanded.

Tehran started reducing its nuclear commitments in May 2019, exactly a year after the US unilaterally left the JCPOA, as the European signatories failed to confront the sanctions that Washington re-imposed on the Islamic Republic in the aftermath of its withdrawal.

Iran’s measures — which will be largely intensified by the parliamentary law — conform to Articles 26 and 36 of the JCPOA, which deals with Tehran’s legal rights in case of non-compliance on the part of other signatories.

Tehran says it will retrace its nuclear countermeasures only after the United States lifts its sanctions in a verifiable.