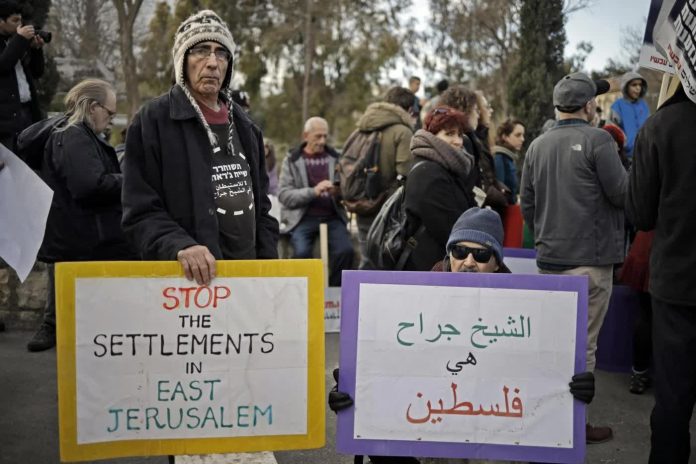 The eviction affects 27 people, in a decision NGO Peace Now says is aimed at dispossessing the Palestinian community of Sheikh Jarrah in favour of settlers

Protesters near the house of a Palestinian family, which an Israeli court had ordered to be evicted while declaring Israeli settlers to be the legal owners, in Sheikh Jarrah, 18 January 2019 (AFP)

A Jerusalem district court has issued a decision to evict six families from their homes in the Sheikh Jarrah neighbourhood of occupied East Jerusalem, where they have lived for almost 70 years, to make way for Israeli settlers.

Israeli NGO Peace Now said in a statement on Tuesday that the Palestinian families, comprised of 27 people living in four houses, were notified of the decision on Monday, and were given until 2 May to vacate their homes.

The organisation said that the decision was “part of an organised move designed to dispossess a Palestinian community of its home and establish a settlement in Sheikh Jarrah in its place”.

Hundreds of Palestinians living in Sheikh Jarrah are facing similar court proceedings, along with hundreds more in the neighbourhood of Batan al-Hawa in East Jerusalem’s Silwan.

The Jerusalem magistrate’s court last week issued a ruling ordering the expulsion of four families from their home in Batan al-Hawa.

All the families have filed appeals and are in various stages of hearings in both the district court and the supreme court.

Meanwhile, dozens of other families are in proceedings and may receive eviction verdicts soon, with Peace Now warning of mass expulsions in the coming months.

“The story here is not legal but political,” said the organisation.

“The court is only the tool by which settlers use with the close assistance of state authorities to commit the crime of displacing an entire community and replacing it with a settlement.”

Nahalat Shimon is owned by a foreign company registered in the United States.

The settlers, according to Peace Now, had purchased the land in the Palestinian neighbourhood from two Jewish associations, the Sephardi Community Committee and the Knesset Israel Committee, claiming ownership over the land since the end of the 19th century.

Sheikh Jarrah resident Abdulfattah Skafi told MEE in November that Israeli settlers who lived next door to him, in a house evicted of its Palestinian occupants, routinely harassed them by throwing loud parties late at night and calling the police on them for no reason.

“Whenever our children pass by them, they trigger problems and call the police who definitely are on their side,” he said.