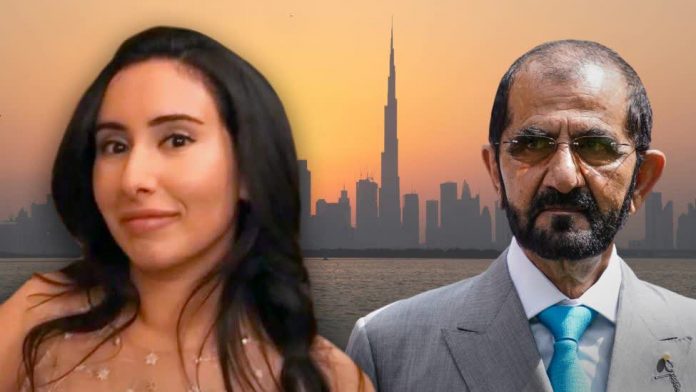 Dramatic new details have come to light about the extraordinary kidnapping and secretive detention of Princess Latifa.

It has been many months since Tiina Jauhiainen last heard from her friend.

Princess Latifa, imprisoned in Dubai after attempting a daring escape, had kept in touch with her for some time using a secret phone.

When Tiina last saw Latifa, they had lain on the deck of a yacht gazing at the stars, travelling across the Indian Ocean.

It was February 2018, and they had embarked on a risky plan to get Latifa out of Dubai and start a new life abroad.

The princess is one of 25 children of Sheikh Mohammed bin Rashid al Maktoum, the ruler of Dubai.

The sheikh has transformed the emirate into a glittering city, a place people flock to for business, and the playground of the region. But for Emirati women, the laws and customs can make life very restrictive.

“I haven’t left the country since 2000. I’ve been asking a lot to just go travelling, to study, to do anything normal. They don’t let me. I need to leave.”

Sitting in Tiina’s apartment, Latifa spoke cheerfully of what was to come.

“I’m feeling positive about the future. I don’t know how I’ll feel just waking up in the morning and thinking I can do whatever I want today. I’m really looking forward to that.”

The princess had no access to her passport and was under surveillance, so they had to slip out of Dubai and drive to the coast of Oman. It took hours for them to get out to international waters, riding a dinghy and jet ski. By the evening they reached the yacht which was supposed to carry them to freedom.

In a Whatsapp message to a friend, Latifa declared: “I’m free”.

They planned to sail across the Indian Ocean, and then fly to the United States where Latifa could try to claim political asylum.

But eight days later, as the coast of India neared, the escape went horribly wrong.

Armed men boarded the boat. The friends hid in the bathroom until smoke grenades forced them up to the deck.

“Latifa was screaming and kicking. She kept saying ‘don’t take me back to the UAE. Just shoot me here’,” Tiina said. It was the last time she saw her friend.

In her later videos, released only now, Latifa gives a vivid account of the storming of the yacht.

“I was fighting, and this guy came with a small pouch and he took out the needle and he injected me in my arm.”

Latifa says she was then transferred to an Indian military ship.

“The commandos carried me through this corridor, and to a big room, and there was in front of me like maybe four or five generals.

“I’m repeating to them ‘my name’s Latifa al Maktoum’.

“I don’t want to go Dubai, I want to get asylum. I was in international waters, you should let me go.”

Her pleas fell on deaf ears, and she says she was then manhandled by an Emirati commando.

“He grabs me. Lifts me up. Kicking and fighting, he’s much bigger than me. So I see that his sleeve is rolled up and arm exposed. I had one shot. Bit as hard as I can, and shake my head. And he screamed.”

She says she was tranquilised and flown back to Dubai.

“I just felt really sad at that point. I felt everything I was working on for so many years to get my freedom was gone. And I’ve been here ever since, by myself, so solitary confinement. No access to medical help, no trial, no charge, nothing.”

Tiina was taken back to the UAE with the yacht’s crew, where she was detained for two weeks. Then she began telling the story to the international media. She formed the campaign group Free Latifa and took the princess’s case to the United Nations.

But as the months passed, she heard nothing from Latifa.

Then one day in early 2019, while she was visiting family in Finland, she got a message from a stranger.

Soon Tiina was able to get a phone to the princess directly.

“When I first heard her voice, I was crying. I couldn’t help it. It was very, very emotional.”

Latifa was able to start recording video messages. What they reveal is shocking.

The princess, now 35, appears in the corner of her bathroom, speaking in a fragile whisper.

“I’m doing this video from a bathroom, because this is the only room with a door I can lock. I’m a hostage. I am not free. I’m enslaved in this jail. My life is not in my hands.”

Pale and puffy, she has spent three years with little access to sunlight.

“I am in a villa, and this villa has been converted into jail. All the windows are barred shut. There’s five policemen outside and two policewomen inside the house. And I can’t even go outside to get any fresh air.”

The villa is just metres from the beach, in a luxury neighbourhood.

The fear is palpable in Latifa’s videos. There is a constant urgency and a desperation in her voice.

“Every day I am worried about my safety and my life. I don’t really know if I’m going to survive this situation. The police threatened me that I’ll be in prison my whole life and I’ll never see the sun again. So I’m not safe here.”

But despite the risk that she would be caught with the secret phone, she began to calmly and methodically document her extraordinary story.

The sheikh has said that he considers Latifa’s return to Dubai a rescue mission.

In December 2018, after Latifa had been missing for nine months, the UAE was facing pressure. The United Nations had requested proof of life – or it would go public with concerns that the princess might have died.

Latifa received a visit from her stepmother Princess Haya.

Haya asked her to lunch.

“She said to me it would be like a test, to see how you will react around people after being in prison for so long,” says Latifa in one video. “And if you act well, you react well, you’re going to be out in a few days.”

Unbeknown to Latifa, Princess Haya had been spun an elaborate lie, that Latifa had bipolar disorder and was vulnerable to exploitation. To help prove to the UN that all was well with Latifa, Haya called a friend, the former UN High Commissioner for Human Rights Mary Robinson.

On 15 December 2018, Mary Robinson flew to Dubai where she says Haya and her officials briefed her about Latifa’s supposed “medical condition”. She agreed to help contact the UN.

Latifa, meanwhile, was kept in the dark. Over the lunch they discussed the environment, skydiving, and Mary Robinson’s upcoming book.

Mary Robinson told us that she did not question Latifa about the video or her escape, or ask to meet with her one-on-one.

“I didn’t know how to address somebody who was bipolar. I really didn’t actually want to talk to her and increase the trauma over a nice lunch.”

But Robinson did allow photographs to be taken of Latifa which she agreed to send on to the UN. Robinson says she believed these were private photographs and that she was stunned when the UAE released them to the world nine days later.

After the lunch Latifa was taken back to her prison villa. “It was all a set up. It was like they tricked me,” Latifa says. Nothing changed for the missing princess.

But for her stepmother Princess Haya, there was an extraordinary development.

“Relatively shortly afterwards,” recalls Robinson, “I got a call from Haya, saying ‘Mary, I am in London. I have just come to London with my two children. I have come in the clothes we were in because I am so fearful. We were wrong. I have found out a lot.'”

Haya later said that the sheikh did not welcome her interest in Latifa and that he became progressively more hostile to her. By April 2019, she says that she believed her position in Dubai was unsafe. On 15 April, she fled to the UK.

Now confronted with the escape of one of his wives as well as two more children, the Sheikh began a High Court battle to have the children returned to Dubai. But he got more than he bargained for.

In March 2020, a High Court judgement revealed further details about his treatment of his adult daughters. Eighteen years earlier, a second daughter, Shamsa, had been abducted in the UK and returned to Dubai, where she has been captive ever since. The judgement laid out the full story, for the first time, of how the sheikh’s agents had tracked her down in Cambridge, and flown her back.

The judge also found that Haya had been intimidated and Latifa had been abducted and imprisoned – and that the sheikh had not been honest and open with the court.

For Tiina, this was a breakthrough. “I thought that would have been something that could have quickly led to her release.”

But once again, little changed for Latifa in her prison in Dubai.

“It’s almost like, what do we need to get her free? It’s sad. It’s very very sad,” says Tiina.

Alone in her villa in Dubai, Latifa followed the case and maintained daily contact with her friend, along with her UK-based maternal cousin Marcus and Free Latifa co-founder David Haigh. What had begun as concise, factual video recordings evidencing her situation had turned into lengthy text chats.

“The phone meant a lot, it was a lifeline,” says Marcus.

Latifa was now in her third year of imprisonment and solitary confinement.

“Every day was a struggle for her, and you could hear that in her voice. I know she was tired, I know her health was not the best,” says Marcus.

But then one day, the contact stopped just as dramatically as it had begun.

Now, many months later, Tiina, David and Marcus have taken the decision to release some of Latifa’s videos in the hope they will help pressure the sheikh to release her.

“We haven’t taken this decision lightly, there’s been some sleepless nights thinking about this”, Tiina says.

“But it’s time to do something. I feel that she would want us to fight for her, and not give up.

The governments of Dubai and the UAE have said that Latifa is safe in the loving care of her family.

Tiina is consumed by fear for her friend.

“Initially, I thought maybe she had problems with her phone. I was hoping she would reappear. I didn’t want to believe it,” says Tiina.

But then it dawned on her that Latifa was not coming back.

“We are extremely worried about her well-being,” she says. “If we assume that she was caught with the phone, her conditions now are probably a lot worse.”

Bayraktar TB2 hits target at longest-range yet in naval drill