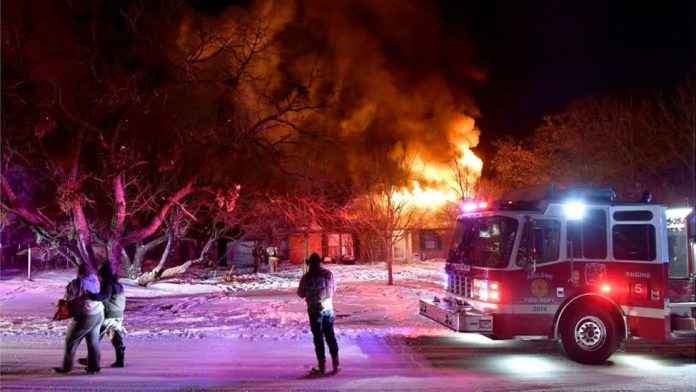 A winter storm in the US has brought deadly freezing winds, ice and snow to many regions that rarely see such frigid conditions.

In Texas, a surge in demand for electricity has led to widespread power cuts. The state is bracing for another icy storm later on Tuesday.

At least 11 deaths have been blamed on the widespread storm.

Deaths have been reported in Tennessee, Texas, Kentucky and Louisiana.

In North Carolina, a tornado spawned by the same storm left three dead and 10 injured early on Tuesday morning. Officials there say rescues are ongoing.

On Tuesday, the National Weather Service reported that over 73% of the US is currently covered by snow.

The freezing storm has even reached northern and central parts of Mexico where millions of people have experienced a second day of intermittent power cuts.

Mexico’s electricity operator has introduced rotating blackouts in at least 12 states, including around the capital, Mexico City. Frozen pipelines have also disrupted the supply of natural gas from the US.

US President Joe Biden has approved a state of emergency in Texas, which has seen some of its coldest temperatures in more than 30 years – some areas hit 0F (-18C) on Sunday.

The high demand for electricity in the state has caused the power grid to fail. Rolling blackouts have been imposed in some areas to conserve power for hospitals, police and fire stations, leaving over 4.3 million people without electricity.

The crisis was worsened when nearly half the state’s wind power generation was knocked out by the storm on Sunday. Wind power is the state’s second-largest source of electricity.

Icy roads have also led to a spate of traffic accidents and people have been advised to avoid travel where possible.

In Houston, nearly 120 road crashes were reported on Sunday alone. A pile-up on a major highway near Oklahoma City during a snowstorm on Sunday left several lorries on fire.

The George Bush Intercontinental Airport in Houston and the city’s Hobby Airport were both closed until at least Tuesday afternoon.

The Texas state legislature closed down on Tuesday due to the storm. House Speaker Dade Phelan told lawmakers to stay away from the Austin statehouse because the “extreme winter weather Texans experienced this week caused the lights to go off across the Lone Star State”.

Texas Governor Gregg Abbott has urged “all Texans to remain vigilant against the extremely harsh weather”.

How are Texans coping with the cold?

Homes in Texas are not normally insulated for cold weather, meaning that indoor temperatures in homes quickly dropped to freezing after heat systems failed. Frozen pipes also burst, despite attempts by some homeowners to insulate them from the cold using blankets.

In Houston, authorities say two family members died from suspected carbon monoxide poisoning after they ran their car in an enclosed garage to keep warm.

In Fort Worth, members of another family were taken to hospital in a critical condition for suspected carbon monoxide poisoning.

An official in the city of Galveston said they had requested a refrigerated morgue lorry to deal with an expected influx of people who may die due to the cold.

The Houston Chronicle was unable to print its daily newspaper due to power cuts. In a note to readers, the paper said that it had still been able to print an edition in 2017 during Hurricane Harvey, which left 75 dead.

The city of Abilene, home to about 125,000 residents, shut off water services after all of the city’s treatment plants lost power.

A medical facility in Houston, where over 8,000 coronavirus vaccine doses were being kept, lost power forcing officials to send the doses to other facilities before they spoiled.

Temperatures in the city of Dallas have been colder than in Anchorage, Alaska, CBS News reported.

The NWS said unusual meteorological conditions had allowed an “Arctic outbreak” that originated just above the US-Canada border to spill out into and across the US.

Over 31 hours without power

Chuck Hairston, who lives in a suburb of Fort Worth, had been without electricity for about 31 hours when he spoke to BBC News on Tuesday.

The 48-year-old Texas native says he has seen some days get nearly this cold, but never before accompanied by such snowy weather.

His fireplace, which runs on gas, has continued working through the storm but the electric fan that distributes the heat through the house is out. So on Monday night, Mr Hairston, his wife, two children and two dogs slept beside the fireplace, covered in “every blanket and pillow we could find in the house”.

He says that if power has not been restored by Tuesday night, he and his family may evacuate to a temporary warming shelter. He’s already tried the local hotels, which are either fully booked or do not have electricity.

“I have not seen any indication that the state’s leadership is doing much of anything about this,” he says. “I think everybody has sort of thrown up their hands and said ‘wait until it gets warmer’.”

Millions of Americans still remain under some form of winter storm warning, with record low temperatures still to come.

“Hundreds of daily low maximum and minimum temperatures have been/will be broken during this prolonged ‘polar plunge’,” the agency said.

In Louisiana, some local authorities have imposed curfews to keep people off the icy roads. The state is also suffering power cuts and traffic disruption.

Oregon, which was hit by an ice storm, saw nearly 250,000 people and businesses without power on Tuesday.

The governor of Illinois issued a state of emergency on Tuesday after snow blanketed the state.

More snow, coupled with freezing rain, is forecast for the southern US on Tuesday. Weather officials say that as the storm departs, frigid low temperatures will be seen across the central and eastern US.