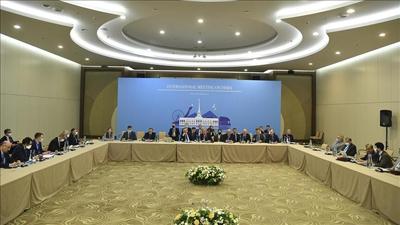 The Astana Group, comprised of Turkey, Russia and Iran, has expressed concerns over the rising terror attacks against the civilians in northern Syria, while drawing attention to separatist agendas that threaten the security of Syria and neighboring countries.

A statement issued by the Foreign Ministry on Feb. 17 detailed the issues discussed by senior officials from the three countries about the recent developments in Syria.

“In the meeting, the current situation in the political process within the context of the Constitutional Committee as well as developments in Idlib and the east of Euphrates were mainly discussed,” according to the statement.

The parties discussed in detail the fifth round of the Constitutional Committee meeting that took place in late January and underscored the importance of adhering to the Terms of Reference and Core Rules of Procedure in order to make progress. Turkey has strongly expressed the necessity for a structured work plan and methodology for the committee to function efficiently, according to the statement.

It also noted that representatives from the three countries discussed the security problems in Syria as well.

“In the meeting, separatist agendas that pose threat to the political unity and territorial integrity of Syria and the national security of neighboring countries were rejected once again, and unacceptability of opportunistic and illegitimate attempts on the ground under the pretext of combating terrorism was underlined,” it stated.

Turkey has long been opposing the support provided to the YPG by the international community, particularly the United States, as part of the ongoing fight against the ISIL.

“Increasing terrorist acts in Syria which resulted in a loss of innocent lives were condemned, and the concern on rising attacks against civilians in the northeast of Syria was expressed,” the statement said.

The parties renewed their commitment to maintaining calm on the ground by implementing agreements on Idlib while Turkey emphasized its expectation of cessation of ceasefire violations and attacks targeting civilians.

“The Working Group on the Release of Detainees/Abductees, Handover of Bodies and Identification of Missing Persons also convened in the margins of the meeting. The future activities to develop cooperation regarding the mutual and simultaneous release of persons detained by the opposition groups and the regime was also discussed in the meeting,” informed the statement.