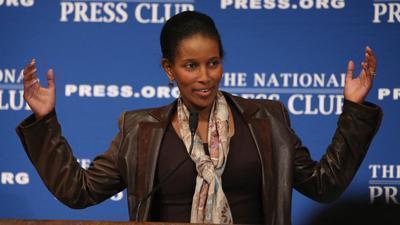 The author, refugee and former Dutch MP says Islam’s treatment of women is eroding their rights as aggressive young male asylum seekers fail to integrate in their host countries and import the brutal misogyny of their homelands.

Across the world, Muslim men keep their wives locked indoors, so much so that some suffer a vitamin D deficiency. But don’t take my word for it, there’s an expert out there with all the evidence and that’s Ayaan Hirsi Ali who details pretty much all you need to know in her latest forensic study of the issue in ‘Prey: Immigration, Islam and the Erosion of Women’s Rights’.

Born a Muslim in Somalia and raised in the Middle East before she emigrated to Europe where she became a Dutch MP just 12 years later, Hirsi Ali is a lightning rod for liberals who accuse her of Islamophobia, racism, bigotry, hate speech and alt-right opinions. None of which ring true if you would just read her book.

She explores the reality that in the religion of Islam, women are not considered equal to men. They are the chattels to be owned. Why else would a man wish to have multiple wives? It is like those millionaires who own garages full of cars. Look at me, look what I can afford, look how many cars/wives/racehorses I have.

It’s not just Dubai, with its glitzy veneer of sun and luxury beach tourism masking a conservative Muslim state, that has a problem. Just this week in Palestine, a Hamas-run court in the Gaza Strip ruled that women must have the permission of a male guardian before they travel. As a reminder, the year is 2021.

This is the sort of Middle Ages nonsense that the West goes to war over. When Islamic State or the Taliban enforce these types of restrictions on women, diplomats can’t jump to their feet fast enough to denounce them in the United Nations.

But when those making the rules are allies of the UK, have fat budgets to buy Brit-made weapons and military equipment or are deemed strategically important proxies in more complicated regional relationships, the criticism is muted.

As Hirsi Ali is at pains to point out, this is not a viewpoint driven by race. It is about religion and how many men, in particular, see the role of women within that ideology. It is about how deeply conservative Muslim attitudes are being exported to Europe from places such as Syria, Afghanistan, Pakistan and Iraq by men who are claiming asylum and how this is turning European neighbourhoods into men-only no-go zones for women as their failure to integrate creates an intimidating environment for females.

And in the twisted logic of those hand-wringers in liberal Western democracies of nations such as Germany, Sweden, the Netherlands and the UK, women are being urged to be more sensitive to the cultural peccadilloes of these men so that THEY don’t feel unwelcome.

Prey was awarded a hostile reception by theNew York Times, that seething cauldron of identity politics where staff seem to devote more time to spying on one another and writing letters demanding colleagues be sacked for infringing upon the unwritten rules of their paralysingly woke work space than doing anything of substance. In a vicious hit-piece, writer Jill Filipovic plays the (wo)man and not the ball, concentrating on Hirsi Ali’s personal story in her attempt to undermine the author’s motives and mistakenly citing opinions that are never expressed.

Most significant of these include Filopovic’s claim that, “Hirsi Ali suggests scrapping the current asylum program, which offers safe harbor to those facing persecution.”

Err, no she didn’t. What she did say was, “The global asylum and refugee system is no longer fit for its stated purpose. As a beneficiary of that system, I do not make such a statement lightly. But the reality is that this outdated asylum system can no longer cope with the challenges posed by mass violence and global migration today.”

As Hirsi Ali commented herself on Twitter, this is all too typical of the way the left now conducts itself in the United States. First the big lie and then the repetition.

I do not expect anything but hostile reviews from the @NYTimes. But @JillFilipovic‘s review makes a number of completely false insinuations about the book, essentially accusing me of reviving racist stereotypes about sexual violence and “the other.”

But I digress. And this is what I mean, by pulling at the threads of issues on the edge of Hirsi Ali’s argument, and distracting readers from what she is saying, the liberals hope to unravel the work to its very core.

The Inglehart-Welzel world cultural map reveals in a glance the distance between the traditional values of Muslim countries and the values of self-expression treasured in the West and it’s easy to see why problems arise when the two value sets meet and this is the theme at the centre of ‘Prey’.

As Hirsi Ali says, the liberal view is that asylum seekers from failed states arrive at their new host country as blank slates, ready to absorb the values of Western democracy, along with the way we treat one another. This is plainly wrong.

In fact, these men, and asylum seekers are predominantly men because they are considered the stronger sex at home and considered more likely to prove successful if they emigrate, carry the baggage of their own mainly Muslim cultures.

The liberal media loves to fantasise that every war zone asylum seeker is a highly-trained neurosurgeon or quantum physicist who will slide effortlessly into his adopted homeland’s top social strata using his fluent German, English or French. This is not the reality. As Hirsi Ali points out, regressive religiosity impacts Muslim employability and is reflected in higher unemployment rates within their communities in the West. The UK Social Mobility Commission found that only 19.8 percent of adult British Muslims had a full-time job in 2017. The more observant, the less able to integrate.

This reinforces what the author calls “parallel societies” and further acts as a barrier to integration. Drugs, crime, violence and anti-social behaviour become entrenched and these societies become breeding grounds for male aggression. Witness the attacks on police in the outlying suburbs of Paris last summer.

The outcome is not just poor schooling and poverty. As ‘Prey’ points out, events in Germany and the UK, have shown that a large contingent of disaffected young Muslim men with a hostile attitude towards their host country can disrupt the way of life for women, sometimes permanently. Bizarrely, they win protection from pearl-clutching liberals determined to justify aberrant behaviour for fear of being branded Islamophic or racist.

Hirsi Ali looks at the string of grooming gangs composed of mainly first and second generation migrant men that operated across Britain and were subject to a 2014 report that found the vast majority – 84 percent – were Asians with Arabic backgrounds, that is, Muslims.

Over the years 1997-2013, the report estimated that 1,400 underage girls in the UK had been groomed and sexually exploited. As Hirsi Ali insists, it is impossible that this has only occurred in Britain and evidence of similar activity has surfaced in Sweden and the Netherlands, where authorities had never heard of the UK grooming gangs. There is an alarming deficit of information sharing so the global picture of this vile practice is missing many pieces.

As the British report found, the local authorities and police were quick to blame the young girls, often turning a blind eye in order to prevent confrontation with the local Muslim community. In court, the men viewed their victims as worthless objects “that they could sexually misuse and cast aside.”

This gross objectification of Western females by Muslim men also drove the attacks on women during the 2015 New Year’s Eve celebrations in the German city of Cologne. A mob of 1,500 drunk and unruly men, mostly newly-arrived asylum seekers from North Africa broke off into groups to surround and sexually assault women – grabbing their breasts, and even attempting to insert their fingers into their vaginas – while the police deliberately looked away.

In the aftermath, 661 women reported being sexually assaulted while on New Year’s Day, a Cologne police statement declared the evening “largely peaceful.”

Unsurprisingly, this statement was soon retracted and the police chief sacked. It emerged that similar, yet smaller, attacks had also taken place in other cities across Germany on the same night. Twelve months later, the new Cologne police chief Jurgen Mathies confirmed that the attacks had been coordinated to intimidate the German population.

It was the price paid by Chancellor Angela Merkel for failing to stem the flow of asylum seekers that flooded into Germany in a catastrophic misjudgment in September 2015 when she announced there was to be no limit to the number of asylum seekers allowed to come to Germany. For a strong female leader, this was an awful decision for German women.

So how to approach the problem of men who “come from a gender-segregated society that abhors the free movement of women in public” and who “see no reason to alter their views simply because they now live in western Europe.”

As mentioned, Hirsi Ali suggests fixing the asylum system which is being abused by those for whom it was never intended. The current rule is that a refugee should not be returned to a homeland in which their life may be in danger. That rules out just about every deportation to Syria, Afghanistan, Iraq and beyond. It’s too easy to exploit and needs to be changed.

More immediate would be to call out – without fearing attack as a bigot, racist or Islamophobe – the misogyny, the sexism and the inhumanity of ignoring womens’ rights from the Muslim ghettos of European cities to the glittering towers of the Middle East. Turn things on their head and think first of basic human freedoms not of cultural offence.