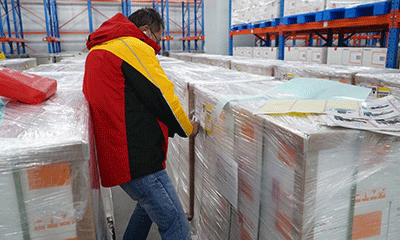 A worker from Chinese mainland vaccine producer Sinovac checks shots of the company’s COVID-19 vaccine CoronaVac that will leave storage in Beijing for Hong Kong on Wednesday. Photo: Courtesy of Sinovac

The just-passed Spring Festival not only witnessed an energetic Chinese society that has revived itself from the COVID-19 epidemic, but also the growing importance of China’s COVID-19 vaccines for the world as more countries and regions are accepting Chinese vaccines as a lifesaver amid the COVID-19 pandemic that is still ravaging on.

Experts said this is a strong demonstration of global confidence in China’s vaccines and that China is fulfilling its promise to provide its vaccines as a type of public goods, rebuking foreign media’s smears and politicization against the country’s vaccines.

The Secretary for the Hong Kong Food and Health Bureau (FHB) Sophia Chan would consider experts’ suggestions and make a decision on the approval of SSinovac’s vaccine as soon as possible, the Hong Kong SAR government website said on Tuesday, after Wallace Lau Chak-sing, the convener of the Hong Kong Advisory Panel on COVID-19 Vaccines, told media that the Advisory Panel had reviewed materials on SSinovac’s vaccine and thought that approving the vaccine would bring about more good than risks to the city.

According to Lau, the Advisory Panel had submitted a report to the FHB and suggested the bureau approve the vaccine for emergency use.

The Global Times learned from Sinovac on Wednesday that the first batch of 1 million finished doses will be moved out of storage on Wednesday and is estimated to arrive in Hong Kong on Friday. The doses will be directly delivered by a plane from Beijing to Hong Kong.

Hong Kong Chief Executive Carrie Lam told media in December 2020 that when a vaccine is approved for emergency use in Hong Kong, she and other principal officials of the Hong Kong Special Administrative Region would accept vaccinations first.

Amid the still-ravaging COVID-19 pandemic, a number of countries including Hungary, Senegal, Morocco and Zimbabwe have received a special Spring Festival gift from China – batches of coronavirus vaccines have arrived to aid the locals’ fight against the deadly disease, which experts said serves as a strong rebuke to the Western media’s claims of China giving an empty promise to those in need.

“It is a powerful rebuke of some Western media claims about China giving others a ‘pipe dream’ in that China has delivered its promise to make coronavirus vaccines a kind of global public goods,” a Beijing-based vaccine expert told the Global Times on condition of anonymity on Wednesday.

It is reportedly the first time that Chen has released such a signal while previously telling media on several occasions that the island would not purchase the mainland’s vaccines.

The island previously pinned their hopes on the US to acquire vaccines, but the US is occupied enough with its own anti-epidemic battle, leaving the island of Taiwan an “orphan” in the vaccine race, Wang Jianmin, a Taiwan affairs expert at the Chinese Academy of Social Sciences, told the Global Times on Wednesday.

Wang said that mainland vaccines would be a better choice for the island, but the Taiwan authorities should show more sincerity in improving cross-Straits relations and facilitate cooperation on vaccines as they still have a discriminative stance against the mainland’s vaccines.

Hungary dispatched a chartered flight which arrived in Beijing and picked up its first batch of the China-developed Sinopharm vaccine on Tuesday. The shipment arrived in the country’s capital Budapest on the same day, making Hungary the first European Union member to purchase China-produced vaccine.

Tamas Menczer, state secretary of the Hungarian Ministry of Foreign Affairs and Trade, said during an interview with CCTV News that saving lives is the top priority for the country, and China’s vaccine has played a key role in this regard, CCTV News reported on Tuesday.

Senegal has also ordered its first vaccine shipment from China, which is also the first among sub-Saharan Africa countries. A chartered flight carrying the packages set forth on its journey back on Wednesday morning, and is scheduled to arrive on Thursday.

Morocco received its second batch of coronavirus vaccines from China on Tuesday. The batch will be distributed to injection sites after the local drug administration confirms its quantity and quality, CCTV News reported on Wednesday. Morocco welcomed its first shipment of vaccines from China on January 27, and initiated its nationwide inoculation plan the next day.

Some 200,000 doses of Sinopharm vaccines donated by China arrived in Zimbabwe’s capital Harare early on Monday morning, becoming the first-ever batch of vaccines that the country has received as it ramps up efforts to curb the spread of the COVID-19 pandemic.

The local government said that the doses can satisfy vaccination needs for 100,000 people, which will be distributed in priority to front-line medical workers. Zimbabwe has purchased another 600,000 doses from China that are scheduled to arrive in early March.

Several other countries, including Pakistan and Equatorial Guinea, also gave the green light for more China-developed coronavirus vaccines to be imported, the Global Times has learned.

China has previously confirmed an annual production capacity of 1 billion doses, but the actual number may surpass or even double it, the expert said.

“As the epidemic has been successfully contained in China, there is no need to promote nationwide inoculations so far,” he explained. “So the vaccines have been exported to countries more in need of curbing the disease.”