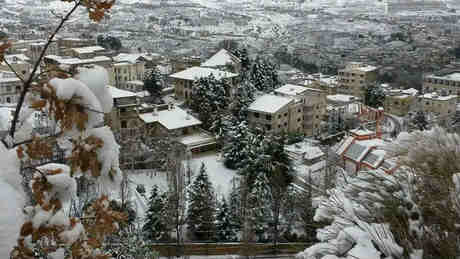 Storm Joyce hit late Tuesday in Lebanon with gale force winds registering between 85 km/h (52 miles/h) and 100 km/h (62 miles/h). The storm is expected to get stronger Thursday.

Breaking a warm spell, the storm brought heavy rainfall, a sharp drop in temperatures and the heaviest snow fall in Lebanon this year.

Snow is expected to cover areas of altitudes as low as 400 meters high, according to the Meteorological department.

Nearly a dozen roads in eastern and northern Lebanon were closed to traffic because of the snow.