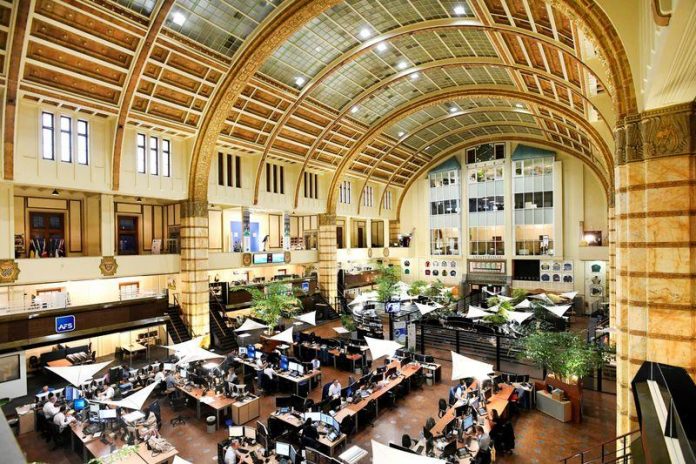 AMSTERDAM/LONDON (Reuters) – All the talk was of Frankfurt or Paris luring London’s financial business as Britain peeled away from the EU. Yet it is Amsterdam that is proving the most visible early winner.

Data last week showed the Dutch capital had displaced London as Europe’s biggest share trading centre in January, grabbing a fifth of the 40 billion euros-a-day action, up from below a tenth of trading pre-Brexit.

Yet that is just one of several areas the city has quietly stolen a march on its rivals as it attracts businesses from Britain, evoking memories of its history as a global trading powerhouse in the 17th century.

Amsterdam has also overtaken London to become Europe’s number one corporate listing venue so far this year, data shows, and the leader in euro-denominated interest-rate swaps, a market estimated to be worth about $135 trillion in 2020.

“There is a whole culture of trading, and to be close to that was very positive,” said Robert Barnes, CEO of London Stock Exchange-owned share trading platform Turquoise, which has selected the Dutch capital over Paris for its post-Brexit hub.

“You have some of the big institutional banks, you have specialist trading firms, a dynamic retail community. But it’s also in the heart of continental Europe.”

Cboe Europe, an equities exchange, told Reuters it was launching an equities derivatives venture in Amsterdam in the coming weeks to emulate the trading model built in its Chicago home.

Asked why Cboe chose Amsterdam over rivals, Howson said the Netherlands was where he saw “substantive growth” for his industry in Europe. He also cited the wide use of English in the city and Dutch regulation being friendly to global investors, in contrast to some European countries’ preference for championing domestically-focused firms.

“You need core Europe to be competitive on a global scale,” said Howson. “A more insular Europe or too much national interest makes that a difficult thing.”

Yet while the arrival of such businesses may bring higher tax revenues from trading volumes and private investment in infrastructure, the city is not experiencing a jobs boom, as many companies relocating there tend to be highly specialised, and smaller employers.

Turquoise’s new Amsterdam operation, for instance, sits in the former head office of the Dutch East India Company, the trading megacorporation that fuelled Amsterdam’s rise to its former finance fame – yet it only employs four staff.

The Netherlands Foreign Investment Agency, which has led the effort to woo Brexit business, told Reuters it estimated about 1,000 new jobs had been created by financial firms moving operations to Amsterdam since Britain left the EU.

That’s a fraction of the 7,500 to 10,000 jobs estimated to have left London for the EU since 2016, when Britain voted the leave the bloc, and a drop in the ocean compared with the British capital’s financial workforce, which numbers over half a million.

Many investment banks with their large staffs have looked elsewhere on the continent, deterred in part by Dutch laws that limit banker bonuses.

HOW IT’S GETTING AHEAD

Banking sources working on the two blank-cheque, or special purpose acquisition companies (SPACs), said Dutch regulations were closest to rules in the United States, making it easier to appeal globally.

In the euro-denominated interest rate swaps market, platforms in Amsterdam and New York have grabbed the bulk of business lost by London, whose share fell from just under 40% in July to just over 10% in January, IHS Markit data shows.

That made the Dutch capital the biggest player, an advance from last July when platforms in the city commanded just 10% of the market.

Amsterdam will also become home to the European carbon emissions trading, worth a billion euros a day in trading volumes, when the Intercontinental Exchange (ICE) moves the market from London later this year.

The Netherlands Foreign Investment Agency, which began analysing where Amsterdam could capitalise after Britain’s 2016 decision to leave the EU, said it had identified certain financial sectors where it believed it could have an edge.

“We focused on specialist areas … that were trading and fintech,” said spokesman Michiel Bakhuizen, adding that the city played up the strength of its low-latency digital trading infrastructure.

“The big investment banks were always going to move to Frankfurt and Paris because of the Dutch legislation that is in place for bank bonuses,” he added, referring to a 2015 law limiting variable pay to a maximum of 20% of base salary.

This drive to focus on specialist areas rather than appeal more broadly could be reflected in the number of companies relocating.

In response to Brexit, 47 firms have shifted operations entirely or partly to Amsterdam from London, according to preliminary data compiled by New Financial, a think-tank.

That is lower than the 88 firms that have moved business to Paris and the 56 to Frankfurt.

Companies to have shifted operations to the Netherlands include CME, MarketAxess and Tradeweb. A handful of asset managers and banks including Commonwealth Bank of Australia are also relocating there.

By contrast, those firms that have moved departments and staff to Frankfurt have mainly been big investment banks, including JP Morgan, Citi and Morgan Stanley, while Paris has mostly welcomed banks and asset managers, according to New Financial.

‘WAY TOO EARLY TO CALL’

William Wright, New Financial’s managing director, notes that although fewer firms have made the move to Amsterdam, the city’s share “is highly concentrated by sector, with Amsterdam having a clear lead in areas like broking, trading, exchanges and fintech”.

Amsterdam’s apparent success, however, may be flattered because Brexit has so far hit trading hardest, and such business may be easier to move.

“The early data on the impact of Brexit is mainly trading-based, hence Amsterdam looks like it is doing particularly well,” Wright added. “And I’m not making a call on Amsterdam for IPOs yet as I think it’s way too early.”

Sander van Leijenhorst, Brexit programme manager at the AFM Dutch financial regulator, said authorities would actually have preferred London retaining its dominance because of the efficiencies that come from concentrating everything in a single European hub, he said.

But once the implications of Brexit became clearer, it was obvious that Amsterdam – home to the world’s oldest stock exchange – would appeal, he added.

“There was already a group of traders here. They tend to come together, they tend to flock together.”