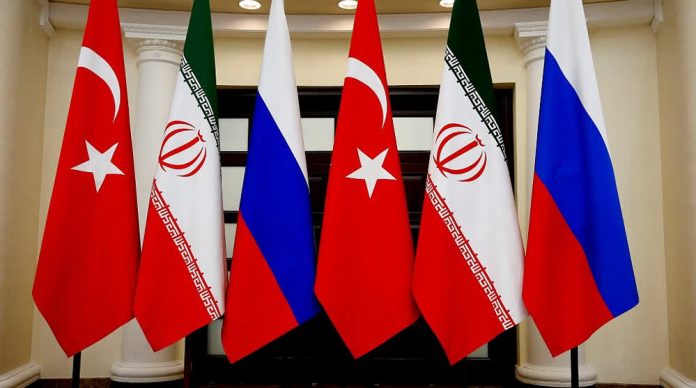 https://www.presstv.com
The flags of the Syria ceasefire’s guarantor states are seen during a meeting concerning the Arab country, in the Russian resort city of Sochi on February 14, 2019.

Iran, Russia, and Turkey, the states that have been serving as the guarantors of an all-Syria ceasefire, stress the importance of respect for the Arab country’s sovereignty and lay emphasis on the need to fight terrorism there until its complete eradication.

The countries made the recommendations in a statement on Wednesday at the end of two-day talks in the Russian resort city of Sochi.

Since January 2017, Moscow, Tehran, and Ankara have been mediating peace negotiations between representatives of the Syrian government and opposition groups in a series of talks held in the Kazakh capital Astana (now named Nur-Sultan) and other places, including Sochi.

The talks are collectively referred to as the Astana peace process.

The first round of the Astana talks commenced a month after the three states joined efforts and brought about the countrywide ceasefire in Syria and assumed the role of the truce’s guarantors.

The negotiations have helped significantly reduce the violence gripping the Arab country by establishing de-escalation zones there, and also enabling the formation of the Constitutional Committee that is tasked with devising a new constitution for the Arab nation.

The talks that concluded on Wednesday marked the 15th edition of the negotiations within the Astana format.

The final statement comprised 17 segments, through which the guarantors primarily reiterated unfaltering commitment towards Syria’s sovereignty, independence, and territorial integrity, and urged all others to do the same.

They reminded that Syria’s crisis — that began in 2011 after various Western and regional countries began funding terrorists and unleashing them onto the Arab nation — could not be resolved through any military course of action.

The trio, therefore, reasserted their commitment to realization of a long-term and viable political solution for Syria that would be implemented by the Syrian people with the help of the United Nations.

They also insisted that the Constitutional Committee should be able to further its efforts towards devising the new constitution in the absence of all foreign pressure.

The guarantors expressed concern regarding an increase in militant activity in Idlib, insisting on preservation of the de-confliction zone that covers the northwestern Syrian province.

The statement also demanded cessation of the Israeli regime’s continued strikes targeting the Arab territory, saying the attacks amounted to violation of international laws and a threat to regional security.

The Israeli regime that is technically at war with Syria due to its continued occupation of the latter’s Golan Heights, has been taking the country under numerous aerial assaults since the beginning of the foreign-backed conflict. The attacks have been targeting the positions of the Syrian army and its allies in the counter-terrorism fight.

The statement, meanwhile, condemned confiscation and transfer of Syria’s sources of oil income amid continued reports about militarization of the country’s oil-rich areas by the United States, which has been maintaining an illegal presence in Syria since 2014.

The statement said the next round of negotiations within the Astana format would take place around the middle of this year.

Ali Asghar Khaji, an Iranian deputy foreign minister, who represented the Islamic Republic in the talks alongside Iran’s Ambassador to Moscow Kazem Jalali, hailed the final statement as a “good agreement on all the issues that pertained to” the Arab nation among the guarantors.

Such an agreement “will prove effective towards [ensuring] peace and stability” in Syria, added Khaji, who was speaking to IRNA.

The official said the talks also featured discussions among the trio’s representatives and a delegation from the United Nations.

Khaji reminded how the Sochi meeting had followed his trip to Damascus and relevant talks with President Bashar al-Assad and other Syrian officials, stressing that Tehran sustained its support for political resolution of Syria’s woes and urged continued operation of the Constitutional Committee.

Jalali, meanwhile, underlined that the Islamic Republic, along with Russia and Turkey, “are determined to strengthen their cooperation” within the Astana format towards realization and preservation of peace and stability in Syria.