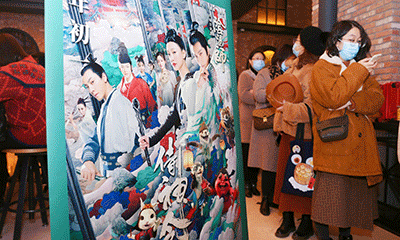 The weeklong Spring Festival holidays have come to an end on the sixth day of the Chinese Lunar New Year. Although this festival was anticipated to be “ruined” by the new wave of epidemic as many people have heeded the call to stay put during the holidays. However, the lively festival was a pleasant surprise to the whole nation. The movie box office hit a record high, express delivery volume across the country was twice that of normal and a huge boom in local tourism boosted the global economic community, demonstrating the extremely strong growth potential of China’s economy.

China’s Lunar New Year consumption success is built on solid gains in epidemic control and prevention. In 2021, the epidemic in many parts of northern China affected the Spring Festival travel rush and the society’s holiday arrangements, as well as the plans of countless people to return home for family reunions. Many had anticipated that this Spring Festival would be as quiet as last year’s, but the situation unexpectedly reversed.

There were complaints about strict controls due to the epidemic in many parts of China in January. However, by the time the Spring Festival approached, the country was back to the state of zero new confirmed cases. During the whole Spring Festival season, there was only one newly reported local case, and the epidemic was firmly under control. This greatly eliminated the concerns of people everywhere about the epidemic, activated the specific happiness and relaxation of people in the holidays, and released people’s constrained desire for consumption. People have gathered to consume in ways that were not expected.

Box-office takings stand out because the film industry was one of those hit the hardest by the epidemic and its recovery requires the most strict epidemic control. A hard rule of 50 percent capacity for theaters is in place during the Spring Festival, but in central cities such as Beijing, audiences flocked to movie theaters and the tickets of all films were almost sold out for the entire festival period. China is undoubtedly the only major economy to break box-office records in the first long holidays in 2021 over that in 2019.

Perhaps this is the result of the resonance between economic strength and anti-epidemic capability, and it is the embodiment of a country’s comprehensive power. The new box-office record brought a light at the end of the tunnel for China’s entire services industry. Chinese people are almost free of burdens to go back to the movie theaters, so what services are there that people are afraid to enjoy? With the suppression of this winter’s epidemic, coupled with the rapid follow-up of vaccination, the Chinese people’s mentality of living and fighting against the epidemic in their daily lives will be further matured, and the overall confidence of the society will be further enhanced.

It is believed that the vast majority of Chinese people are quite satisfied with their actual experience during the Spring Festival holidays, though there are some regrets.

Tens of thousands of new deaths and hundreds of thousands of new cases were reported in the US in past seven days, and the epidemic was just as severe in Europe. Yet China, with its orderly control, has largely kept the festival alive, allowing people to enjoy a healthy long holidays. To be honest, until two weeks before the Spring Festival, it was not expected that the Spring Festival could be so good.

It is incredible that this “tale of the unexpected” can complete a cycle in such a short period of time and in such a big country. Since last year, this cycle has been repeated as a whole and locally around the epidemic. Even earlier, in the face of the turbulent impact of the US-launched trade war against China, we proved ourselves with some “unexpected” capabilities. The result of all this is a renewed confidence in the Chinese people that China is much stronger than we had thought, and that we have the capacity to overcome the challenges in our own way.

The Chinese lunar Year of the Ox is off to a great start. At this rate, the growth rate of China’s economy in the first quarter of 2021 will surely be the best compared with other major economies, which lays a good foundation for China to maintain its international competitive advantage throughout the year. Of course, China still has to face its own challenges, and it is crucial to speed up vaccination throughout the society and lay the groundwork for the epidemic prevention to a higher level. In addition, there are still some uphill battles to combat against the economic impact of the epidemic. We need not only to keep up with the changes, but also to get ahead of them and lead the way for economic and social development as the epidemic continues.