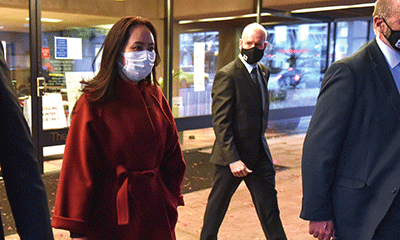 “Taking people from their families and using them as bargaining chips is both illegal and immoral.”

This is more than true. But it is just ridiculous to hear it from the mouth of Canadian Foreign Minister Marc Garneau. As the country that is responsible for the shocking illegal detention of Huawei executive Meng Wanzhou, Canada launched on Monday the so-called Declaration Against Arbitrary Detention in State-to-State Relations. With the 58-nation initiative, Ottawa has shocked the world, again, by showing how shameless it could be.

How can a country indulge so much in double standards, upholding the banner of justice while simultaneously pushing down the lower limit of its moral criteria?

When Lu Kang, director-general of the Department of North American and Oceanian Affairs of Chinese Foreign Ministry, gave an exclusive interview on September 3, 2020 to Canada’s The Globe and Mail, he said that “the US… did make the request to dozens of other governments to detain Meng Wanzhou, but none of them followed this ridiculous idea, until Madame Meng entered Canada.”

“Why [did] the Canadian government became the only one?” Lu asked.

It is obvious that other countries clearly perceived how nonsensical and dangerous the US’ request was. However, Ottawa, by blindly following Washington’s anti-China campaign, set a new path of geopolitical competition between major powers. The Canadian government has indeed put businesspeople all around the world under the risk of geopolitical games.

Pandora’s box has thus been opened. But Ottawa has never introspected one bit about its wrongful doings. Instead, it has gone further in the wrong direction regarding the Meng case. Now, even more hypocritical, Ottawa has put forward an initiative that seems to seek justice but is actually another clumsy trick to provoke China.

The fact that Canada took the lead in issuing this declaration should be seen as due atonement for its crime.

Western media called the initiative “a non-binding declaration,” and they also view it as another “coalition” formed by a group of mostly Western countries led by Canada “in a signal to China.”

Although we think we have seen enough double-standard actions taken by some Western countries, the West that claims itself as the future for humanity has been constantly surprising us by refreshing the definition of “being shameless.” The West is challenging humanity’s most basic conscience with repeated outdated old tricks. When will the West stop trying to deceive the world?

If the Canadian government really opposes arbitrary detention of foreign nationals under geopolitical reasons, if it really acts as it claims in the “declaration,” Ottawa should have refused to be the US’ pawn in illegally detaining Meng more than two years ago. And now it should have stopped using the Meng case as a barging chip to coerce China.

After all, Canada’s attempt to play “microphone diplomacy” will end in vain as it has always been. Such moves will only further expose Canada’s really despicable nature and how shameless the West can be when it needs to safeguard its false image.

US Secretary of State Antony Blinken said in a video press statement on Monday that, “Human beings are not bargaining chips. This is a matter of human rights and the rule of law. We’ll stand up for both – together.”

Again, human rights were mentioned; again, rule of law was talked about. But what kind of country of rule of law would constantly prevent an innocent businesswoman from getting the justice she deserves and should have been given long time ago?

And what kind of country it is that keeps talking about human rights but has constantly been infringing on the basic human rights of people outside the camp it is in, and even of its own minorities?

All those Western countries should take a good look into the mirror: After telling so many lies, can they still manage to recognize who they are?