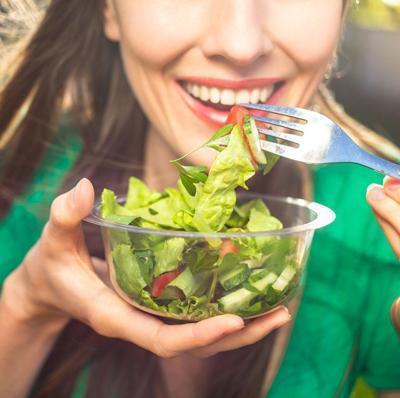 Calorie-for-calorie, green vegetables are the most nutrient-dense foods on the planet.

Green vegetables are officially back on the menu. The meteoric rise of plant-based eating and veganism – dubbed the ‘plant-based revolution’ – coupled with a boom in home cooking thanks to the COVID-19 pandemic, has seen demand for leeks, broccoli and sprouts soar by as much as a third, according to TH Clements, one of the biggest UK growers of green vegetables.

As the nation’s experimental chefs are discovering, getting your fill of green vegetables needn’t be dull or flavourless. Whether you whizz them into a breakfast smoothie, blend them into soups, or even bake them into crisps, there are myriad ways to access the potent health fix green vegetables offer without boiling them into sloppy mush.

We spoke to Dr Laura Freeman, GP and co-founder of Plant Based Health Online, about the healthiest green vegetables to pile on your plate:

If you’re looking for an easy way to up your nutrient intake, incorporating more green vegetables into your diet is the simplest way to do it. That’s because, per calorie, green vegetables are the most nutrient-dense foods on the planet, Dr Freeman explains.

‘Fruits and vegetables – particularly dark leafy green vegetables – are packed full of antioxidants, anti-inflammatory compounds and an array of phytonutrients, which all act to support a healthy immune system,’ she says. Here’s 16 of the best:

‘Kale is loaded with lutein; a phytonutrient that provides cardiovascular benefits as well as benefits for eye health, decreasing the risk of age-related macular degeneration,’ says Dr Freeman. ‘Lutein must be obtained from the diet and just one serving of kale contains 22mg of lutein.’

Like kale, spinach is an excellent source of the antioxidant vitamins A and C, and contains 181 per cent of your daily vitamin K intake in every 30g serving. Getting enough is vital for keeping your joints well-oiled – if your diet is lacking, you’re much more likely to develop arthritic knees, according to a study by Boston University School of Medicine.

Spinach is also one of the richest dietary sources of quercetin – a flavonoid antioxidant that plays an important role in helping your body combat the oxidative damage caused by free radicals, which is linked to chronic diseases. Studies show that quercetin helps to dampen down inflammation in the body.

Closely resembling a tiny tree, broccoli is another member of the cruciferous family. Along with its impressive vitamin profile – which includes vitamins C, A, and folate – broccoli is rich in a compound called glucoraphanin, which is converted into a potent antioxidant called sulforaphane as you digest it.

A powerful anti-cancer phytonutrient, sulforaphane is found in all cruciferous veg but broccoli is the best source.

‘A powerful anti-cancer phytonutrient, sulforaphane is found in all cruciferous vegetables but broccoli is the best source,’ says Dr Freeman. ‘As heating may destroy the enzyme that activates sulforaphane, chop broccoli into pieces around 40 minutes before cooking and let it rest to help maintain the levels.’

Given that they’re made almost entirely of water, these crunchy green vegetables are an excellent source of potassium – a heart-healthy electrolyte that benefits your heart rate and blood pressure – packing 13 per cent of your RDA in every 300g cuke. They contain high levels of plant compounds known as cucurbitacins, which may stop cancer cells from reproducing, early research has found.

Cucumbers are also a good source of pectin, a type of dietary fibre that feeds the beneficial gut bacteria, improving digestive health. Surprisingly, they even contain moderate amounts of antioxidants like beta-carotene, vitamin-C, vitamin-A, zeaxanthin, and lutein. Most of the health benefits are wrapped in the skin, so be sure to eat them unpeeled.

Containing around one tenth of your daily intake in every 90g serving, cabbage is a rich source of vitamin B6 and folate (B9), which have a direct impact on your energy levels and brain function. Around 60 per cent of the fibre in cabbage is insoluble, which can’t be broken down in the intestines – adding beneficial bulk to your poop.

‘Cabbage is another cruciferous vegetable that is rich in fibre, with 1g of fibre for every 10 calories,’ says Dr Freeman. ‘It may get a bad rep as ‘boring’, but it packs an impressive range of antioxidants and can help prevent type 2 diabetes as part of a healthy plant-based diet.’

Given its low calorie, high-fibre credentials, celery is often seen as the ultimate ‘diet food’, but those thin green stalks have plenty going on inside them. As well as antioxidants in the double figures, celery contains a phytochemical known as phthalides, which boosts blood flow and reduces blood pressure by relaxing artery walls.

Plus, a plant flavonoid called luteolin – found abundantly in celery – can disrupt a key component of the inflammatory response in the brain, researchers from the University of Illinois found. Inflammation plays a key role in neurodegenerative diseases like Alzheimer’s, Parkinson’s and Huntingon’s, and is also implicated in ageing.

Also called Chinese cabbage or pak choi, this delicious veggie is a member of the Brassica cabbage family. ‘Bok choy is a nutrient-dense green and its low oxalate content makes it easier for us to absorb the calcium present,’ says Dr Freeman. ‘It has 158mg of calcium in just one 70g serving, and the recommended daily amount of calcium for most UK adults is 700mg a day.’

What’s more, green vegetables like bok choy make sure immune cells in the gut – known as intra-epithelial lymphocytes (IELs) – function properly, research published in Cell Press found. The numbers of IELs depends on levels of a protein called the aryl hydrocarbon receptor (AhR). This protein can be regulated by compounds in veggies, the scientists say.

Asparagus is especially rich source of plant-based folate – containing around 34 per cent of your daily intake in every 90g serving – an essential nutrient that helps form red blood cells. Like other green vegetables, it’s full of antioxidants like vitamins E and C, glutathione, and the flavonoids quercetin, isorhamnetin and kaempferol.

The veggie strengthens a system that healthy cells use to protect themselves against cancer cells, researchers at the University of Strasbourg found; adding that asparagus likely helps to protect humans from bowel cancer. However, it’s early days, and more research is needed.

Green peppers aren’t a different species of bell pepper – they’re just harvested earlier, before they turn yellow, orange and then red. Because of that, they have a slightly bitter flavour, and different health benefits. For example, they contain high levels of the antioxidant lutein, which isn’t present in ripe bell peppers.

Green peppers are delicious when eaten raw and a great source of vitamin C which is essential for the immune system.

‘Green peppers are delicious when eaten raw and a great source of vitamin C, a nutrient that is essential for optimal functioning of the immune system,’ says Dr Freeman. ‘They have around double the vitamin C content of oranges and other citrus fruits. We should aim for 100–200mg of vitamin C a day from our diet.’

While leeks come from the same family as onions, shallots and garlic – known as alliums – they don’t grow underground bulbs. They’re a source of the prebiotic fibre inulin, which has several body benefits: nourishing gut bacteria, supporting digestion, relieving constipation and boosting bile production – which helps your gut break down fats.

Allium veggies are known for being heart-healthy. Every 5g of an allium vegetable eaten per day reduces your risk of death from atherosclerosis, which occurs when plaque builds up in your arteries, by 18 per cent, researchers at the University of Western Australia found.

They’re also a rich source of the antioxidant, vitamin C. When men ate about 300g of Brussels sprouts daily for three weeks, the damage to their cells caused by oxidative stress decreased by 28 per cent, a study by the TNO Nutrition and Food Research Institute in The Netherlands found.

Don’t underestimate the power of cress. This peppery sandwich-filling staple is often overlooked for its small size, but it’s actually the most nutrient dense food in on the planet, according to a study by William Paterson University, and therefore tops their list of ‘powerhouse fruits and vegetables’.

Watercress is a source of phytochemicals called isothiocyanates, which have been shown to prevent colon, lung, prostate and skin cancers in test tube studies. These anti-cancer compounds protect healthy cells from damage, neutralise carcinogenic chemicals, and block the growth and spread of tumours.

Green beans are loaded with vitamins, minerals and antioxidants – especially iron and folate, with every 100g serving providing 13 per cent and 10 per cent of your daily intake respectively. They’re rich in fibre, particularly soluble fibre, which helps to lower levels of ‘bad’ LDL cholesterol and improve total cholesterol levels.

These green vegetables are especially healthful for people with chronic digestive issues, since they’re a low-FODMAP food. This means they don’t contain certain types of carbohydrates that trigger symptoms like gas, bloating, stomach pain, diarrhea and constipation in people with irritable bowel syndrome (IBS), for example.

This crunchy, anise-flavoured winter vegetable is especially rich in minerals – particularly copper, iron, phosphorus and potassium – and potent polyphenol antioxidants like rosmarinic acid, chlorogenic acid, quercetin, and apigenin, which have proven anti-inflammatory effects in the body.

Fennel has strong estrogenic properties, which means that it acts similarly to the hormone oestrogen. Because of this, it’s an effective way to manage postmenopausal symptoms such as hot flashes, sleeplessness, vaginal dryness and anxiety, without serious side effects, according to a study by The North American Menopause Society.

Also known as silverbeet, Swiss chard is potent source of many vitamins and minerals. A 175g serving delivers a whopping 716 per cent of your daily vitamin K needs. That might sound like a lot, but the nutrient’s importance can’t be understated: getting enough in your diet could help slow cognitive decline, the Federation of American Societies for Experimental Biology found, protecting your brain from Alzheimer’s disease and dementia.

Getting enough vitamin K in your diet could help slow cognitive decline – protecting your brain from dementia.

The same serving also packs 214 per cent of your vitamin A requirements, plus decent amounts of vitamins C and E, calcium, magnesium, copper, zinc and phosphorus. Swiss chard also contains a long list of antioxidants – flavonoids like beta-carotene, alpha-carotene, lutein, and zeaxanthin – and even traces of omega-3 fatty acids.

A flowering plant sometimes referred to as ‘lady’s finger’, okra is botanically a fruit, but it’s used as vegetable in cooking. Unlike many green vegetables, it contains a small amount of protein – around 2g in every 100g serve. Micronutrient-wise, it’s particularly rich in the essential mineral magnesium, delivering around 15 per cent of your daily recommendation in the same portion.

Okra is heart-healthy because of its high polyphenol content, and also due to a thick gel-like substance called mucilage. As you digest okra, the mucilage binds to cholesterol, sweeping it out of your system. In a study by the South China University of Technology, mice fed okra powder eliminated more cholesterol in their stools and had lower total blood cholesterol levels than the control group after eight weeks.