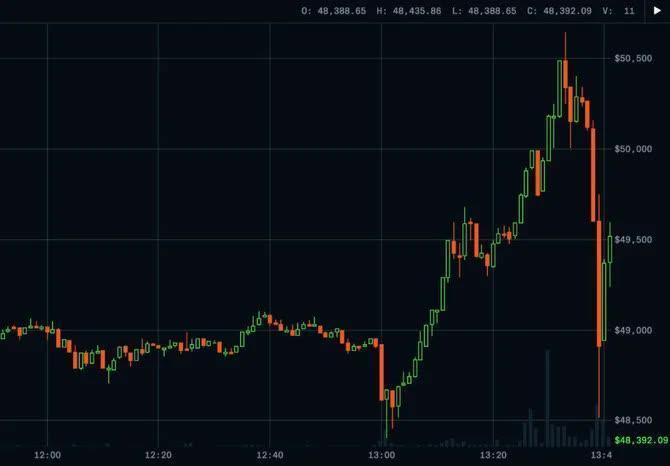 View of the BTC-USD trading pair candlestick chart on Coinbase Pro after cryptocurrency Bitcoin rallied to $50,000 in this screenshot taken in CET time February 16, 2021. (Coinbase via REUTERS)
Short Url -https://arab.news/2zxk9-AFP

LONDON: Bitcoin has enjoyed a record-breaking week after electric carmaker Tesla and Wall Street finance giants sparked a goldrush for the world’s most popular virtual currency, but bubble fears persist.
Investors and mega-corporations alike have been wooed by dizzying growth and the opportunity for profit and asset diversification.
The unit blasted past $50,000 on Tuesday following a week in which Tesla invested $1.5 billion in bitcoin and vowed customers could use it to buy vehicles and both New York bank BNY Mellon and credit card titan MasterCard announced plans to support bitcoin.
The cryptocurrency then vaulted higher, topping $52,000 on Wednesday after investment fund giant BlackRock also confirmed a push into the booming sector.
Yet this week’s astonishing ascendancy of bitcoin has sparked renewed fears of a big bubble which the market had last experienced four years ago.
US software firm MicroStrategy meanwhile announced plans on Wednesday to sell convertible bonds in order to buy more bitcoin, raising eyebrows in some quarters.
“Suddenly it feels like 2017 again when everyone wanted (to) … ride the crypto wave,” warned OANDA analyst Craig Erlam.
“If companies’ fundamentals are going to become closely tied to movements in bitcoin because they have suddenly become speculators on the side, we are going to be in bubble territory before you know it.”
The unit had previously hit the headlines in 2017 after soaring from less than $1,000 in January to almost $20,000 in December of the same year.
The virtual bubble then burst with bitcoin’s value then fluctuating wildly before sinking below $5,000 by October 2018.
“Bitcoin is an asset that is incredibly volatile and is very risky,” said professor Matthieu Bouvard at the Toulouse School of Economics.
“At the same time, we have been saying for ten years that bitcoin will collapse — but it’s still there,” he told AFP, adding that the unit’s volatility would decline as its popularity broadens.
One bitcoin is currently worth five times more than a year earlier, while the combined value of all units in global circulation is almost $1.0 trillion.
Industry professionals maintain however that bitcoin is a new and ground-breaking financial unit of the future.
Eric Demuth, chief executive of cryptocurrency broker Bitpanda, describes bitcoin as the “new digital gold” that is prized by investors who seek to diversify assets and guard against inflation.
“Bitcoin will soon be added to the balance sheet of central banks,” Demuth told AFP.
A number of central banks have indeed announced plans for bank-backed digital units, but are highly skeptical over bitcoin because of its shadowy nature — and the fact that it remains unregulated.
European Central Bank President Christine Lagarde declared this month that bitcoin was “not a currency” and was a “highly speculative” asset requiring global regulation.
At the same time, Europe represents just ten percent of bitcoin purchases from investment funds, according to cryptocurrency data provider ByteTree.
US companies have meanwhile been quicker than their European counterparts to embrace the unit.
“The difference between the US and Europe in that regard is the same with pretty much any kind of adapting to new technology. It always takes just a bit longer. In the US, they started two years ago,” noted Demuth.