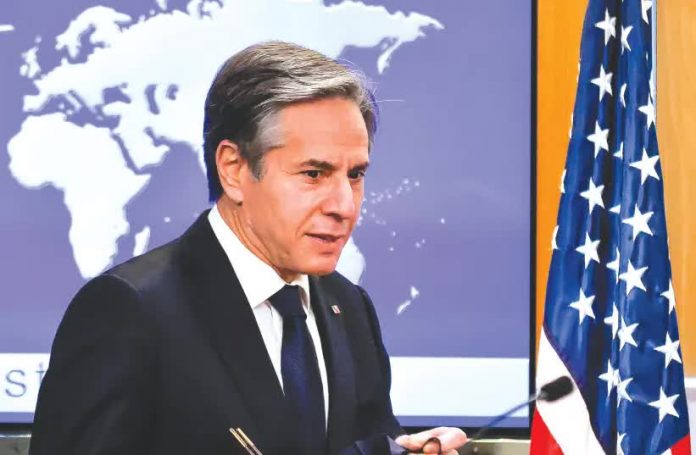 US SECRETARY of State Antony Blinken removes his face mask before holding his first press briefing at the State Department in Washington, DC, on January 27.
(photo credit: CARLOS BARRIA / REUTERS)

WASHINGTON – The United States is prepared to talk to Iran about both countries returning to compliance with a 2015 deal that aims to stop Tehran from developing a nuclear weapon, US Secretary of State Antony Blinken told European allies on Thursday.

Following the meeting, the four countries released a joint statement, saying the sides “expressed their shared fundamental security interest in upholding the nuclear non-proliferation regime and ensuring that Iran can never develop a nuclear weapon.”

The E3 and the US also called on Iran “not to take any additional steps, in particular with respect to the suspension of the Additional Protocol and to any limitations on IAEA verification activities in Iran.”

The E3 and the United States are united in underlining the dangerous nature of a decision to limit IAEA access, and urge Iran to consider the consequences of such grave action, particularly at this time of renewed diplomatic opportunity,” the foreign ministers added.

Addressing Iran’s recent actions to produce both uranium enriched up to 20% and uranium metal, the four ministers stated that “these activities have no credible civil justification. Uranium metal production is a key step in the development of a nuclear weapon.”

German Foreign Minister Heiko Maas had warned that Iran’s latest moves jeopardize a return of the United States to the nuclear deal.

“The more pressure is applied, the more difficult it gets to find a political solution,” Maas said, adding that talks “are being significantly complicated at the moment because Iran obviously does not seek de-escalation but escalation – and this is playing with fire.”

According to Reuters, President of the European Council Charles Michel said that he spoke with Iranian President Hassan Rouhani, and that the EU supports full implementation of the JCPOA agreement.

Ray Takeyh, senior fellow for Middle East studies at the Council on Foreign Relations (CFR), told The Jerusalem Post that it seems that the administration is looking to get back to the deal and rather quickly.

“They will choreograph with the Iranians a step-by-step plan for a return,” he said. “Then comes the stalemate. There will be a lot of talk about making the deal ‘stronger and longer.’ But in reality, it will remain as is, a deficient agreement expiring before our eyes.”

Michael Singh, a senior fellow and managing director at The Washington Institute and a former senior director for Middle East affairs with the National Security Council, told the Post that negotiating a more comprehensive deal won’t be easy.

“Iran has given little indication that it desires a follow-on agreement,” he said. “The Biden administration thus needs to convince Iran that these two steps are inseparable, that there can be no return to the JCPOA without moving in short order – in Secretary Blinken’s words – to the negotiation of a new deal.

“Iran, for its part, appears to be doing everything it can to counter this by pressuring the US to simply return to compliance with the JCPOA without modifications, seeking to instill a sense of urgency or panic in Washington through steps such as producing uranium metal or reducing cooperation with IAEA inspectors,” Singh added. “For the US strategy to succeed, the Biden administration will need to resist this pressure, which so far it is doing; be willing to continue enforcing sanctions in the meantime; and devise with its E3 allies an approach to JCPOA reentry that retains sufficient leverage for a second round of talks.”

George Perkovich, vice president for studies at the Carnegie Endowment for International Peace overseeing the Nuclear Policy Program, told the Post that the Biden administration’s approach to Iran appears straightforward. “‘Path to diplomacy’ means just what it says,” said Perkovich. “If Iran wants to negotiate an improvement in relations and a reinstatement of the JCPOA, the US is willing to do so. The US would like to reinstate the JCPOA and then address additional issues of concern – to improve on the JCPOA, which would require giving Iran more too; to perhaps address limitations on missile ranges and testing; to address Iran’s regional activities, and political prisoners. The big questions are whether Iran is willing to change its actions, and if so, for what US or international accommodations in return.”

Michael Pregent, senior fellow at the Hudson Institute, told the Post that “Tehran continues to cheat on our European allies with impunity prodded on by China and Russia, who will benefit the most from lifting sanctions on Iran. If the Biden administration gives up the leverage gained under Trump’s “Maximum Pressure” campaign, it will once again reward Tehran for provocations with concessions.”

Pregent quoted Blinken saying that if Iran returns to the deal the US will as well, and then the US will “seek a longer and stronger agreement.”

Iran wants concessions from the US, the regime wants the lifting of all sanctions, and for the US to return to a deal that according to Rouhani, “cannot be changed.”

“We have these looming deadlines – imposed on the Biden team by the regime – warning the US that unless it lifts sanctions and reenters the JCPOA, the regime will further violate the JCPOA,” Pregent said. “The regime will continue to cheat on those parties remaining in the JCPOA while they stay silent.”