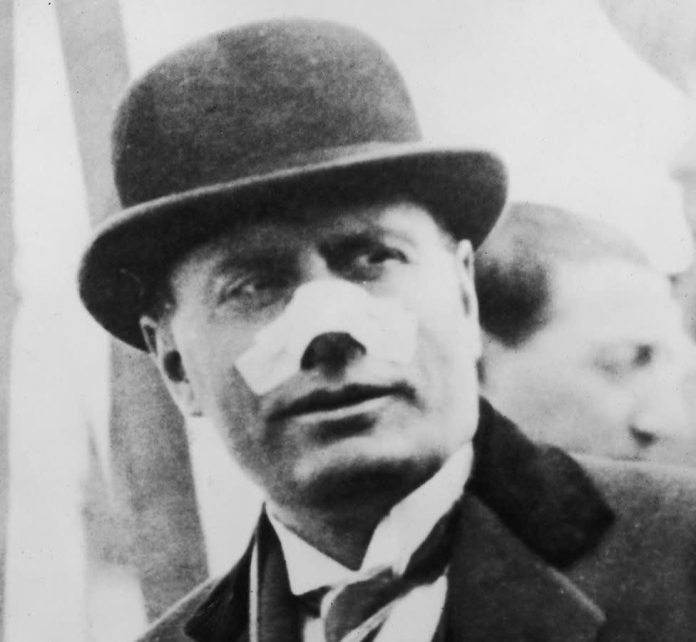 On 7 April 1926 an Irish woman stepped out from a crowd in Rome and fired a shot at one of the 20th century’s most infamous dictators.

One bullet grazed the nose of Benito Mussolini, but the Italian leader survived the assassination attempt.

Among the many acts of individual bravery against fascism in Europe in the 20th century, Violet Gibson’s has been largely lost to history.

Of the four people who attempted to assassinate Il Duce, she came closest.

Now, nearly a century later, moves to put up a plaque in Dublin are gathering pace.

Her attempt on Mussolini’s life came three years into his rule, as he was making a speech.

She fired three shots before the gun jammed and was then attacked by Mussolini’s supporters, and only saved by the police intervening and arresting her.

After some time in an Italian prison, she was deported to England, something it is suspected might have happened to spare the embarrassment of a public trial in Italy.

She was subsequently kept in St Andrew’s Hospital, a mental asylum in Northampton, until her death in 1956.

In the days following the attempted assassination, the President of the Executive Council of the Irish Free State W.T. Cosgrave, wrote to Mussolini to congratulate him on his survival.

Her story is made all the more unlikely the by the circumstances of her birth.

The daughter of Anglo-Irish aristocrat Baron Ashbourne, Lord Chancellor of Ireland (the country’s highest legal office at the time), she was a debutante in the court of Queen Victoria.

Dublin City Council has now passed a motion which has given initial approval to put up a plaque dedicated to her in the city.

The motion states the “committed anti-fascist” should be brought into “the public’s eye and given her rightful place in the history of Irish women and in the rich history of the Irish nation and its people”.

“It suited both the British authorities and her family to have her seen as ‘insane’ rather than as political,” the motion adds.

‘For her bravery she suffered atrociously’

Independent Dublin city councillor Mannix Flynn, who put forward the motion, said Violet Gibson was a person who “for some odd reason, the Irish establishment, and indeed the British establishment, have totally ignored”.

“Like most people, and particularly women, who have done extraordinary things they are always pushed into the background,” he told BBC News NI.

“If you look at World War One or World War Two, the women were right there with the men.

“Here and there now we pull the odd thing out of the bag to give them their dues, but it is a rare thing.”

“For some strange reasons, Violet Gibson became some sort of an embarrassment, she got shunned, they tried to say she was insane to hide the shame.”

Mr Flynn said Ms Gibson’s family had given their support for the plaque and he expected the proposal to progress to its next committee stage in the coming weeks.

He said while it would be dependent on securing permission of the building’s owner, a likely site for the plaque would be her childhood home in the Merrion Square area of Dublin.

In 2014, the story of Ms Gibson was brought to wider audience by a radio documentary broadcast by RTÉ, made by Siobhán Lynam, and drawing on the book ‘The Woman Who Shot Mussolini’, by Francis Stoner-Saunders.

The documentary subsequently served as the basis of the film ‘Violet Gibson, The Irish Woman Who Shot Mussolini’, which was directed by Ms Lynam’s husband Barrie Dowdall, and is currently being shown at film festivals internationally.

“People would go on pilgrimages to try to kill Mussolini, and a woman, and a 50-year-old woman at that, she shot him at point blank range,” said Ms Lynam.

Mr Dowdall said a “key thing” in the story was a number of letters she wrote appealing for her release from St Andrew’s Hospital to powerful society figures, including Princess Elizabeth – the present Queen – and Winston Churchill, who it is possible she spent time with when he was in Ireland as a child.

Ms Lynam and Mr Dowdall were able to view the letters in Northampton, where they remained unsent to their intended recipients.

“She was released [from Italy] on condition that she was locked up for the rest of her life,” said Ms Lynam.

As part of their research, the husband and wife team looked at archive materials in Italy, and said the largest collection of information on any of the individuals who attempted to assassinate Mussolini was held on Ms Gibson.

“If this had been done by a man, there would probably be a statue or something put up. Because she was a woman, she was locked away. We are just so happy that we are able to tell a story and get it out there,” said Mr Dowdall.

He said the plaque was a good thing as it acknowledges Ms Gibson, and helped to bring her story to a wider audience.

“Violet Gibson was someone who was very brave to do what she did, and between her and Benito Mussolini, and all the things he did, who was really mad?”

Who was Benito Mussolini?

Mussolini’s National Fascist Party came to power in Italy in the aftermath of World War One, backed by armed groups known as blackshirts who intimidated opponents.

Mussolini adopted some of Hitler’s policies – notably the anti-Jewish laws of 1938 that stripped Italy’s Jews of their civil rights. More than 7,500 Italian Jews died in the Holocaust.

Mussolini was executed after his capture by Italian partisans in 1945, while attempting to flee the Allied advance.