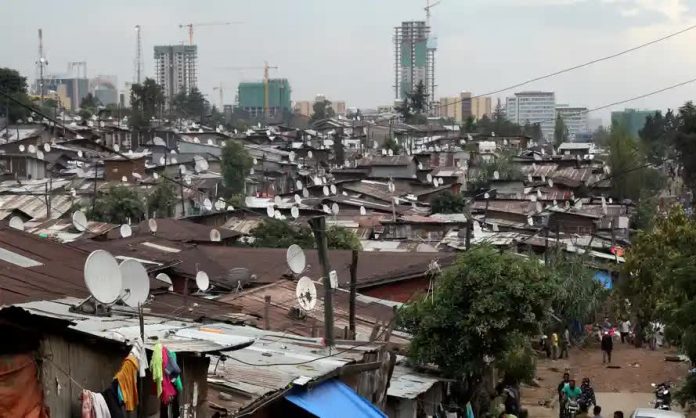 The outskirts of Addis Ababa. Ethiopia is one of only three countries to have applied for debt restructuring under a G20 scheme. Photograph: Alamy

Boris Johnson should use his presidency of the G7 this year to insist that UK banks take part in the global push to alleviate a new developing country debt crisis, a campaign group has urged.

The Jubilee Debt Campaign (JDC) said there was a special responsibility on Britain to act, as it released new figures showing that London-based banks were the largest owners of debt issued by poor countries.

With steps being taken in New York to make debt restructuring easier, the JDC said the UK was now the most important country when it came to unblocking multilateral debt relief efforts.

The president of the World Bank, David Malpass, has urged private lenders to take part voluntarily in a debt suspension scheme orchestrated by the G20 group of leading developed and emerging market countries, but so far none have signed up.

Tim Jones, the head of policy at the Jubilee Debt Campaign, said: “It is unfair for private lenders to keep being paid in full when other lenders have suspended debt payments. Lower-income countries are spending $144m [£102m] a day on debt payments.

“Private lenders need to be made to comply with international debt relief efforts so that poor countries have the resources they need to tackle and recover from the Covid crisis, and so that further multilateral action on debt relief can be unlocked. As the country in the world with the greatest responsibility for private lenders, the UK must use its presidency of the G7 this year to unblock private participation in debt relief.”

The JDC’s figures show that of the 73 countries eligible for debt relief under the G20 initiative – which was launched in the early stages of the Covid-19 pandemic – 30% of the debt was owed to private lenders in the UK. By contrast, 18% was owed to Chinese private lenders and 7% to US companies.

Until now only three countries – Chad, Ethiopia and Zambia – have applied for the G20’s new common framework for debt restructuring, which requires debtors to request the same restructuring from private lenders as from governments.

The JDC said the majority of the debt payments of Chad, Ethiopia and Zambia were to private lenders, with 33% owed to UK companies, 23% to Chinese companies and 15% to US companies. G20 governments had, however, failed to provide a mechanism under which debtors could make private lenders take part.

The campaign group said its figures were for debts owed to private lenders other than bonds, which normally take the form of commercial loans. Its previous research had shown, however, that 90% of bonds owed by countries eligible for the G20 initiatives were governed by English law, rising to 100% for Ethiopia and Zambia’s international bonds. Chad does not owe any debt as bonds.

The JDC has calculated that in 2020 developing country debt payments reached the highest level since 2001, more than doubling from 6.7% of government revenue in 2010 to 14.3% in 2020. When the Covid crisis began, 64 countries were spending more on external debt payments than on healthcare.

A Treasury spokesperson said: “The UK is a longstanding supporter of low-income developing countries and recognises the challenges they are facing from the Covid-19 pandemic. Chairing his first G7 finance ministers meeting last week, the chancellor called on private-sector creditors to play their full part to help ensure sustainable debt treatments for the poorest countries, paving the way for a truly global recovery.”