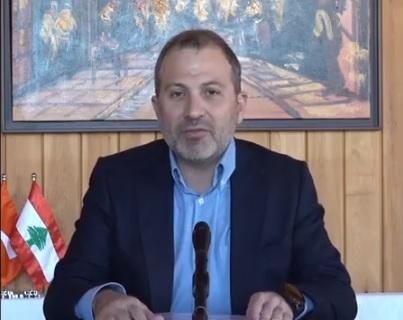 In a lengthy televised address, Bassil denied that the FPM and President Michel Aoun are seeking a one-third-plus-one share in the new government.

“Enough with the false accusations over the one-third-plus-one issue and with the lying to world capitals that we want it to control the government and so that Jebran Bassil becomes the next president,” the FPM chief said.

He added that the FPM has an initiative under which it would grant its votes of confidence to the new government.

“Let them raise the number of ministers from 18 to 20, and this is not so that we take an additional Christian seat for the president. We would accept giving this seat to Marada but not to the PM-designate, and it would be better if they raise the number to 22 or 24 to respect the principle of specialty instead of giving one minister two unrelated portfolios,” Bassil proposed.

“When the PM-designate says that naming the Sunni ministers is his exclusive right, when he takes from the Progressive Socialist Party the name of its (Druze) minister, and when he awaits the Shiite duo to give him the names of their ministers, he is accepting that the formation of the government be subject to the principle of the federalism of sects and parties,” Bassil said.

“If this is the governing principle, then the president must apply it to every Christian bloc that wants to participate,” he added.

Bassil also proposed another initiative under which the FPM would grant confidence to the government in parliament regardless of its participation in the cabinet.

“Also ask Alvarez to begin the forensic auditing of the central bank without any pauses or setbacks,” he added.