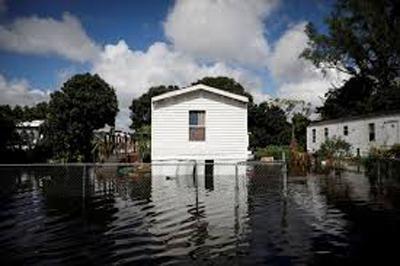 NEW YORK (Reuters) – Rising sea levels and extreme weather could cause $20 billion of flood damage to at-risk U.S. homes this year, rising to $32 billion by 2051, according to research from New York-based flood research non-profit First Street Foundation published on Monday.

The cost of flood damage was approximately $17 billion annually between 2010 and 2018, according to testimony (here) from Federal Emergency Management Agency representative Michael Grimm. First Street does not have comparable estimates for 2020 or 2019.

Roughly 4.3 million homes – concentrated in Florida, California, South Carolina and Texas – have a substantial risk of sustaining economic damage from flooding this year, the report shows. The majority are not required by the U.S. government to have flood insurance. Were all of them to buy federal insurance, National Flood Insurance Program (NFIP) rates would need to increase 4.5 times to cover the risk, according to the report. The current average NFIP premium for these 4.3 million homes is $981.

Using Miami-Dade county in Florida as a case study, earlier First Street research (here) showed that homes that had been flooded had a 3% price discount. Homes that were nearby other flooded properties and roads had an 11% discount.

This flood risk has been underpriced in mortgage- and real-estate-backed markets due to outdated federal government flood maps.

The number of properties with a substantial risk of flooding this year is approximately 70% higher than what is estimated by FEMA’s maps, according to First Street (here). FEMA maps are used to determine rates on government flood insurance and to underpin risk assessments done by mortgage lenders, big real estate firms and investors.

“By and large, we find that most commercial real estate firms don’t presently have a good grasp of what this change could mean to the repricing of assets,” said Eby.