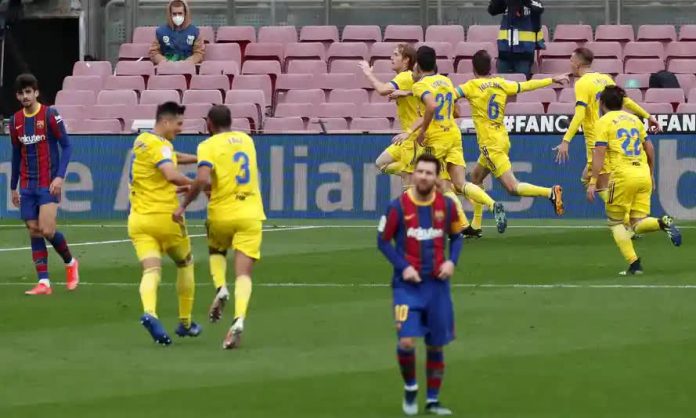 Barcelona’s bad week continued after a late penalty earned Cádiz a point at Camp Nou, cancelling out Lionel Messi’s own first-half spot-kick in a 1-1 draw.

Messi marked his record 506th La Liga appearance for Barcelona by opening the scoring with a 32nd-minute penalty, awarded after Pedri had been tripped by the Cádiz winger Iza.

Ronald Koeman went with the same starting XI that had been thrashed 4-1 at home by Paris Saint-Germain last week, but they failed to build on their lead and paid the price when Clément Lenglet gave away a late penalty.

The French defender was penalised for striking the Cádiz forward Ruben Sobrino as he tried to clear the ball in the 89th minute. Thne midfielder Fernández made no mistake from the spot to end Barça’s run of seven successive league wins.

“It is disappointing,” Koeman said after the match. “These types of games have to be won and we did not. It was a great opportunity lost after the loss of Atlético. I am very disappointed, more so than on Tuesday. We could not afford to let two points get away.

“I don’t like to blame individual players but we were not up to the task offensively and we have to defend differently. For our quality, we had to win. You leave the door open for them to draw at the end if you don’t kill the game and score the second.”

The draw leaves Koeman’s side eight points behind the La Liga leaders Atlético Madrid, who were beaten at home by Levante on Saturday. Elsewhere, Real Sociedad bounced back from Europa League defeat by Manchester United as Alexander Isak’s hat-trick set up a 4-0 home win against Alavés. The bottom club Huesca boosted their survival hopes with a 3-2 victory against Granada.

In the Bundesliga, RB Leipzig have cut the gap to the leaders Bayern Munich to just two points with a comprehensive 3-0 win at Hertha Berlin. Marcel Sabitzer put the visitors in front after 28 minutes with a long-range rocket, with Nordi Mukiele pouncing on a mistake by Hertha’s Matteo Guendouzi to double Leipzig’s lead in the second half.

The goalkeeper Peter Gulacsi kept Hertha out at the other end, before Willi Orban headed in the visitors’ third goal as Leipzig capitalised on Bayern’s surprise defeat at Eintracht Frankfurt on Saturday. In Sunday’s other games, Hoffenheim thrashed Werder Bremen 4-0 in a mid-table encounter, while Leverkusen needed a last-gasp Edmond Tapsoba equaliser to avoid defeat at struggling Augsburg.

In Ligue 1, Lille returned to top spot with a 4-1 win at Lorient. The visitors went ahead after 21 minutes when Andrew Gravillon deflected Zeki Clik’s strike into his own net, only for Lorient to strike back immediately through Jérôme Hergault. José Fonte restored Lille’s lead before half-time, and Jonathan Ikone’s free-kick put them in control on the hour.

Domagoj Bradaric’s missile from the edge of the area completed the scoring in stoppage time as Lille moved three points clear of Lyon and four ahead of PSG, who host Monaco in Sunday’s late game. Elsewhere, Lens and Metz boosted their hopes of European football with 2-1 wins against Dijon and Nice respectively.

Third-placed Paris St Germain lost ground in the title race when they slumped to a 2-0 home defeat against Monaco
.
Five days after humbling Barcelona 4-1 in the Champions League, the French champions lacked stamina and inspiration as they fell four points behind leaders Lille who have 58 points from 26 games after beating Lorient 4-1 on Sunday.
Fourth-placed Monaco, who have now won eight of their last nine league games, prevailed through goals by Sofiane Diop and Guillermo Maripán to move within two points of PSG.