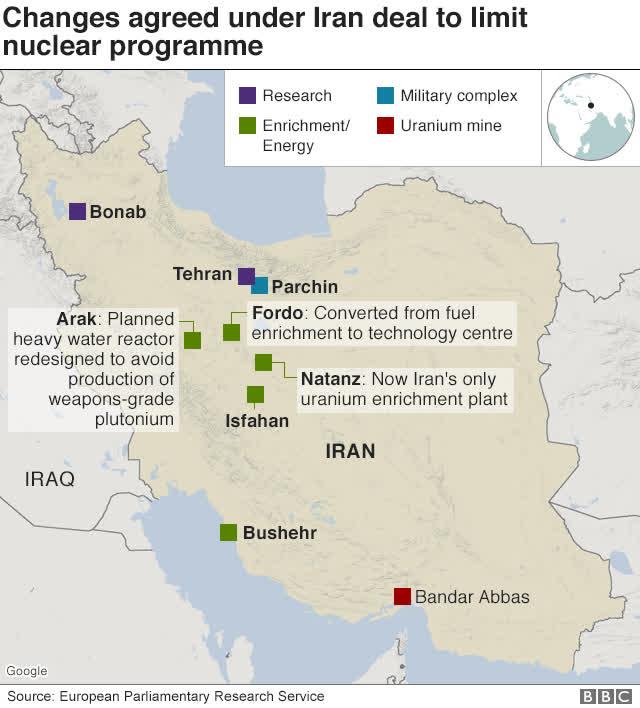 The head of the UN nuclear watchdog says Iran has agreed to extend UN inspectors’ access to its nuclear sites for three months.

But the hastily brokered agreement will give IAEA officials less access and end their right to make snap inspections.

Iran is changing its access policy from Tuesday because the US has not lifted the sanctions imposed since Donald Trump abandoned the 2015 nuclear deal.

Washington and Tehran now have more time to seek a compromise.

The then-Trump administration re-imposed crippling sanctions on Iran, and Tehran retaliated by resuming nuclear activity barred under the agreement signed with six world powers in 2015.

Iran says it will not reverse the measures unless the US fully complies with the 2015 deal – but US President Joe Biden has said Iran must do so first.

The crisis over Iran’s nuclear programme has been on the international agenda for almost 20 years. Iran says its atomic programme is for peaceful purposes, while the US and others suspect Iran is secretly seeking the capability to develop nuclear weapons.

What do Iran’s latest actions mean?

A law coming into force on Tuesday by Iranian MPs requires the government to stop allowing the inspection at short-notice of declared or undeclared nuclear sites by experts from the global nuclear watchdog, the International Atomic Energy Agency (IAEA).

“This law exists. This law is going to be applied, which means that the Additional Protocol, much to my regret, is going to be suspended,” said IAEA chief Rafael Grossi, after a weekend of talks in Tehran.

“There is less access, let’s face it. But still we were able to retain the necessary degree of monitoring and verification work,” he added.

The “additional protocol” allows the IAEA to make unannounced inspections at sites not previously disclosed by a country.

Iran had agreed to resume the snap inspections under the 2015 deal, having previously suspended them in 2006. Such visits are a voluntary part of a separate, earlier nuclear Non-Proliferation Treaty (NPT) – an international agreement drawn up in the late-1960s designed to prevent the spread of nuclear weapons, which Iran joined in 1970.

Last year, Iran refused the IAEA access to two suspect sites it requested to visit, resulting in a months-long standoff before Iran relented.

Less intrusive routine inspections of nuclear sites by IAEA experts agreed to under the 2015 deal will continue – and Iran has said the new law will not lead to the inspectors’ expulsion – but the abandonment of another commitment will heighten international alarm.

Mr Grossi said that the temporary agreement covering the next three months had “to a certain extent mitigated” the change in Iranian policy.

“But of course for a stable, sustainable situation there will have to be a political negotiation that is not up to me,” he added.

‘This deal buys some precious time’

The IAEA’s boss, Rafael Grossi, called this “a good result”.

It certainly seems likely to defuse a mounting sense of crisis surrounding Iran’s nuclear activities and efforts to breathe new life into the 2015 Joint Comprehensive Plan of Action, or JCPOA.

Crucially, it significantly reduces the impact of a new Iranian law, due to come into effect on Tuesday, which would have seriously hampered the IAEA’s ability to do its work.

Iran will still suspend implementation of the so-called Additional Protocol, which gives the IAEA substantially enhanced tools with which to carry out inspections.

But Mr Grossi clearly believes the “temporary bilateral technical understanding” reached after talks in Tehran this weekend will allow his inspectors to continue doing their job to a satisfactory degree.

The deal will have its sceptics, particularly among those for whom the JCPOA was always a mistake, and who also believe it’s pointless, or even dangerous, to try and rescue it.

But coming at a time when the Biden administration has indicated its willingness to return to the negotiating table, this deal buys some precious time.

Why has Iran acted now?

In the short term, it wants to put further pressure on the US and other parties to the 2015 deal – France, Germany, the UK, Russia and China – to get Washington to lift sanctions on Iran’s oil, banking and financial sectors.

The Iranian law was passed after Joe Biden had won the US presidential elections but before he took office, with Iran holding some hope that the new leader would be more willing to engage than his hardline predecessor.

However, the Biden administration has made clear that it expects Iran to return to full compliance with the 2015 deal before the US will re-join the accord and end sanctions. Iran’s Supreme Leader, Ayatollah Khamenei, who has the final say in his country on such matters, has said it is up to the US to take the first step.

Iran has increasingly stopped complying with its obligations under the 2015 deal since the US withdrew, deepening concern among the remaining members that its resumption of banned activities could ease the path towards a bomb.

Last month, US Secretary of State Anthony Blinken said Iran could be “weeks away” from having enough material to go into a nuclear weapon – though more recent Israeli assessments suggest it would take Iran about two years to develop a deliverable device.