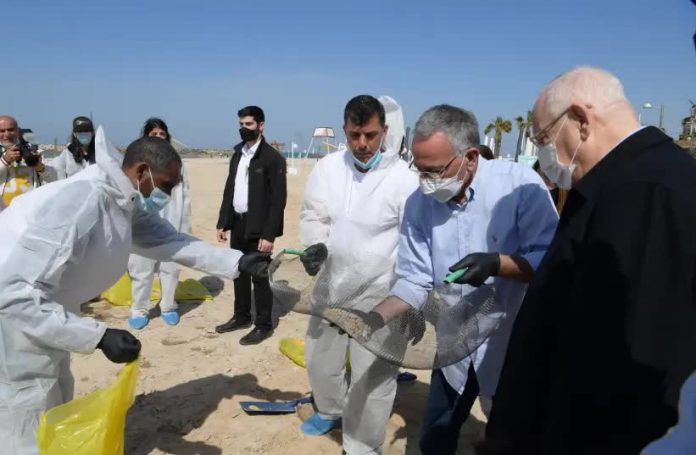 Details of the investigation into the oil spill which led to an unprecedented ecological disaster along Israel’s Mediterranean Coast in recent days were placed under censor by the Haifa Magistrates Court on Monday, after a request was filed to do so by the Environmental Protection Ministry.

Any details which could identify the suspects – including the names of people or vessels, destination or exit ports, navigation routes or cargo – are forbidden for publication under the censor.
The decision to censor the details was described by Israeli media as “irregular.”
In response to reports that the Environmental Protection Ministry knew about the spill before the tar reached the shores of Israel, the Ministry stressed on Monday that it did not have any prior warning about the spill until the tar reached the shores of the country on February 17.
According to the Ministry, the spill reportedly occurred over 50 kilometers off the coast of Israel outside its territorial waters. Israel is a party to the Barcelona Convention, which requires countries and vessels to report any unusual event, but such a report did not come to Israeli authorities.
After the Ministry became aware of the incident, it contacted REMPEC from Malta and EMSA with a search request using their satellite systems. The Europeans conducted a close inspection which found a number of possible suspects in the area for being a source of contamination. The findings were examined by the Ministry immediately after being received, with one of the suspicious locations, located 50 km opposite of the coast of Ashkelon, was found using a model for predicting sea movements run by the Ministry.
Some 10 ships have been located as possible suspects for the spill and the Ministry is working to find the person responsible and take action against them. Two of the ships suspected arrived at the port of Ashdod at one point. The Ministry is in contact with international bodies and once suspected ships are identified, the ministry will contact the relevant authorities to take action against the suspected ships.
“When the entities operating at sea and producing a risk of pollution are rich oil companies and shipping companies that have much influence on the regulator, Zalul demands a transparent investigation and that the [censor] order be lifted immediately,” said Maya Jacobs, director-general of the Zalul Environmental Association.
In response to the censor order, Adam Teva V’Din (Israel Union for Environmental Defense) warned that “hiding all issues related to the investigation of the tar disaster is a fatal blow to public confidence in the government and regulators who are supposed to ensure the safety of the public and the environment. On environmental issues, certainly when it comes to disasters of this magnitude, transparency and disclosure of information to the public is critical and enshrined in the law and rulings.”
Adam Teva V’Din is examining options to appeal the censor order.
“The Environmental Protection Ministry did not take measures to monitor and prevent the ecological disaster and thus allowed it to occur,” said Dr. Revital Goldschmid from the Environmental Research Center in Haifa. “The ministry delayed and did not warn the public in time about the severity and dangers – and now the ministry operates in the absence of transparency towards the country’s citizens who volunteered to help clean the beaches.”
Goldschmid stated that this wasn’t the first time deficiencies in the Ministry’s conduct, professionalism and interests have been recorded, with the State Comptroller’s report from 2019 claiming that the ministry prioritizes foreign interests over the public. She demanded transparency concerning the failures of the handling of the situation, as the issue could harm the general public by impacting desalination facilities, power stations, leisure and nature scattered along the coast.

THE MINISTRY told Maariv, The Jerusalem Post‘s sister publication, that the request for the censorship order was done due to “the investigation conducted by the National Marine Environment Protection Division and the Green Police, which has complex international aspects.”

On Sunday, Environmental Protection Minister Gila Gamliel had stated that the ministry was “focused on locating the ship responsible for the significant pollution and is assisted by all international bodies.”
Gamliel announced on Sunday that the ministry would request that the government approve immediate budgets for beach rehabilitation, manpower and national preparedness for ocean and beach oil pollution, among other measures.
“At the same time, we are making sure that the rehabilitation actions carried out by the local authorities and other responsible parties will minimize the damage and environmental and ecological impacts, and restore the situation to its former state, according to world accepted standards,” she said.

On Monday, MK Tamar Zandberg (Meretz) called on the State Comptroller to investigate the government’s conduct in dealing with the tar spill.

“Behind the grim images of pollution on the beaches are many failures that require in-depth examination; it is a man-made [tragedy] that could have been prevented,” she said. “A quick and thorough procedure of investigating the events is a necessity. Without decisive action by your office, the next ecological disaster is only a matter of time.”

The coastal local authorities that are part of the Sharon-Carmel Union of Cities announced on Monday that they would halt cleanup efforts along the beach after the Finance Ministry refused to approve the plan and budget presented by the Environmental Protection Ministry. The authorities stressed that they were not prepared to fund the cleanup off the backs of the residents and authorities. An emergency meeting on the matter will take place on Monday evening at 7 p.m.

PICTURES OF sea creatures, turtles, birds and coasts coated by the masses of oil that washed up on Israel’s shores have caused an uproar in Israel, with many demanding that the government find whoever is responsible.
The exact cause of the oil spill is still unknown, but one possibility being investigated is that a foreign ship carrying a large amount of oil spilled the oil during the winter storm that recently hit the area.
Thousands of volunteers, including IDF soldiers, have been working in recent days to help clean up the beaches and sea.
President Reuven Rivlin visited clean-up efforts at the beach in Herzliya on Monday and thanked volunteers for their work in cleaning up the beaches and saving animals.
“What we see here is an eyesore and heartache,” said Rivlin. “These sights are a wake-up call. We must work on a national environmental protection plan to ensure that events like this do not surprise us. It is a national duty that we must not neglect. This is the only way we can protect our children’s and grandchildren’s futures, so that they live in a safe, clean and unpolluted environment.
“When we protect the environment, we are not only taking care of the flora, the fauna, the sea and the beaches: We are looking after our home,” he said.

Lebanon’s caretaker prime minister Hassan Diab said on Monday he was following up on an oil spill that may have originated from a ship passing near the Israeli coast and has now reached the southern shores of Lebanon.

Lebanon’s Diab has tasked the defence minister, environment minister and the National Council for Scientific Research with the follow-up, a statement from his office said.
The sticky black deposits that showed up on Israeli beaches were visible on Monday on beaches in a nature reserve in Tyre, south Lebanon.
The United Nations interim forces in Lebanon will be informed to draw up an official report, the statement said.