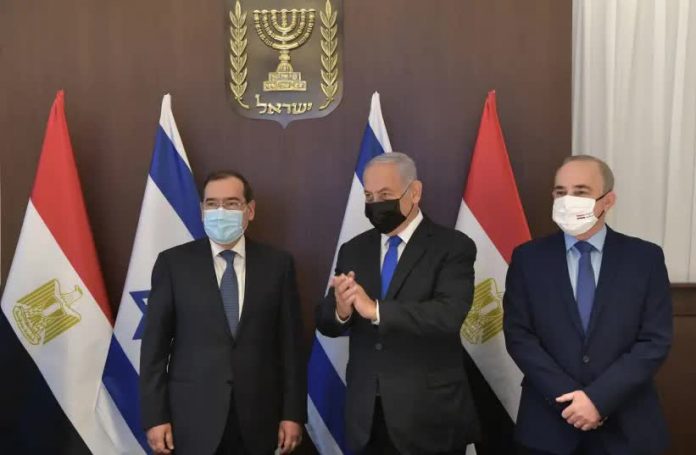 Prime Minister Benjamin Netanyahu said ahead of his meeting with Molla that Israel and Egypt have become an “energy hub.”

Israel and Egypt continued to expand their cooperation on natural-gas issues on Sunday, as Egyptian Petroleum and Mineral Resources Minister Tarek El Molla visited Jerusalem for the first time.
Energy Minister Yuval Steinitz and Molla agreed to work toward an agreement between their countries to connect Israel’s Leviathan gas field to facilities owned by the Egyptian Liquefied Natural Gas company via an offshore pipeline. The agreement would make it easier for Israel to export liquefied gas to Europe, via the Egyptian plants.
Steinitz said he was “happy and excited” to host Molla, the first Egyptian minister to visit Israel since 2016. Molla is his good friend, and he has “wonderful relations” with him, he said.
“We established the Eastern Mediterranean Gas Forum, which unites Arab countries with the State of Israel, and I thank Minister El Molla for leading the forum,” Steinitz said. “This is a historic visit, and I feel lucky to host the minister and his staff in Israel.”
The Israeli and Egyptian energy ministers were the founders of the Eastern Mediterranean Gas Forum.
Along with Israel exporting natural gas to Egypt for the past year, this marks the most significant economic cooperation between the countries since peace agreements were signed between them almost 42 years ago, Steinitz said.
They also discussed ways to increase the Palestinians’ energy independence, including developing a Gaza marine field, the establishment of a power plant in Jenin and supplying natural gas to the Palestinians.
“Together with Minister Steinitz, we started together a few years back the expansion of the cooperation in energy, which was enhanced by the foundation of the East Mediterranean Gas Forum,” Molla said.
Israel and Egypt have become an “energy hub,” Prime Minister Benjamin Netanyahu said ahead of his meeting with Molla.
“Together we can supply not only our own needs but the needs of many other countries,” he said. “So it is in this spirit of friendship and cooperation and peace and prosperity that I welcome you to Israel.”
Egypt was the first Arab country to make peace with Israel, and the addition of four more countries in the past year “is becoming something that can better the lives of all the people in economic terms, and we think that this is a great opportunity for regional cooperation – Egypt, Israel and the other countries,” Netanyahu said.
Egypt is a strategic partner for Israel, Foreign Minister Gabi Ashkenazi said. He praised the growing cooperation on energy and natural gas matters.
“I hope that your visit will open the door to visits and cooperation in other areas,” Ashkenazi told Molla.
Israel’s development of its natural-gas resources in the past decade has been a boon to its diplomatic standing, especially in the Eastern Mediterranean, bolstering ties with Egypt, Greece, Cyprus and other countries in the region.