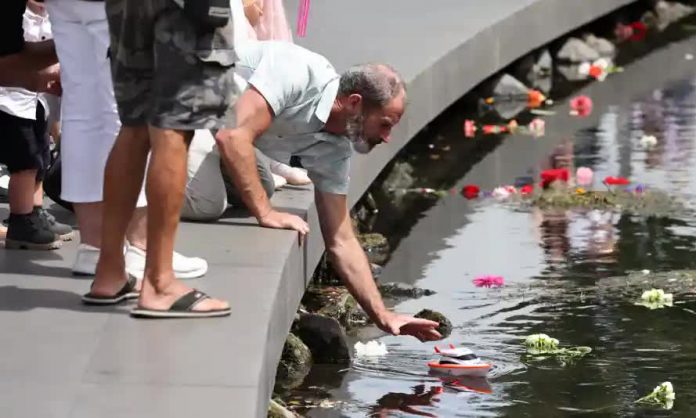 A minute’s silence was observed at 12.51pm, exactly 10 years after the quake struck the New Zealand city

A family member of one of the Christchurch earthquake victims releases a toy boat into the Avon River during the national memorial service marking the 10th anniversary of the quake Photograph: Peter Meecham/Getty Images

The  Guardian-Elle Hunt in Christchurch

The victims of the Christchurch earthquake have been remembered at an emotional ceremony marking ten years since the tragedy.

The memorial service was held on Monday afternoon at the Canterbury Earthquake National Memorial in the heart of the city, with tributes from Christchurch mayor Lianne Dalziel, the prime minister, Jacinda Ardern, and The Queen.

Their names were read aloud by first responders and members of the Christchurch community, followed by a wreath-laying ceremony at the Memorial Wall.

Ardern said the anniversary was a chance to remember and celebrate those who lost their lives alongside their families.

She also acknowledged those foreign nationals prevented from attending the service by Covid; the survivors left with “unseen scars” from the disaster; and the children who grew up in its aftermath – known as the “generation of the rebuild”.

“Ten years on, there will be people still living their daily lives in the long shadow of that day,” she said. “… It’s the Kiwi way to be stoic, and sometimes the pressure to be OK or to have moved on with the passage of time can be very pronounced – but healing takes time, and even as time passes, none of us will forget.”

Maan Alkaisi, who lost his wife in the CTV building collapse, spoke on behalf of the Quake Families Trust, acknowledging the special global friendships forged between the bereaved families – and “ten years of injustice and mistreatment”.

With the CTV Families Group, Alkaisi has been pushing for charges to be laid over the 115 deaths in the CTV building. The group intends to take their case to the United Nations this year.

“Today reminds us of our responsibility to make sure we learn from this tragic experience and honour those lovely people we lost by ensuring their dreams are kept alive,” said Alkaisi.

The resilience and community spirit of Christchurch city and people, amid ongoing difficulty and disruption, was also acknowledged.

The governor-general of New Zealand, Dame Patsy Reddy, delivered a message from the Queen marking the “sombre anniversary”.

“While there are many sad memories of that terrible time, there is also solace in remembering how your community rose to the challenge of rebuilding your lives and supporting each other. You displayed great fortitude in the face of sudden and overwhelming loss,” she said.

In concluding her speech, Ardern highlighted energy and optimism in Christchurch’s future following a “hugely difficult decade”. She read from The Sparrows, a poem by Helen Lowe, about the absence of birds in Christchurch city after the earthquake – and their eventual return.

“I threw old bread onto the island of grass in our own grey sea and waited … and waited.

“And then, finally, they came, their wings clouding the sun.”