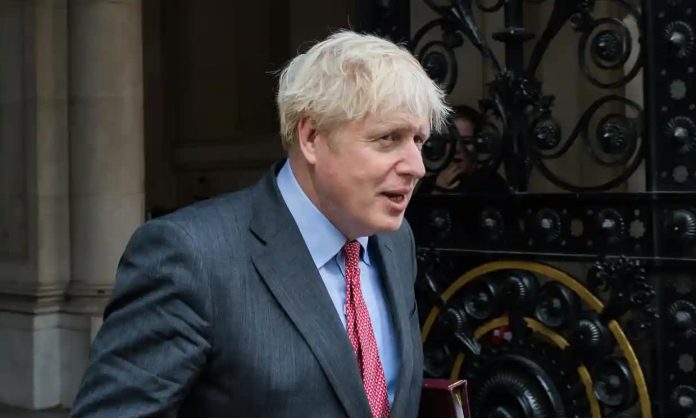 Boris Johnson will set out a four-stage lockdown plan in the Commons on Monday. Photograph: Getty Images

PM to unveil proposals for England on Monday, with shops and restaurants facing longer wait

loved ones will take precedence over the reopening of shops and hospitality when Boris Johnson sets out his roadmap for lifting restrictions in England on Monday, with school sports and family picnics offered as a trade-off for a longer closure of retail and restaurants.

Johnson will order the reopening of all schools on 8 March and pledge that two families or a group of six friends will be allowed to meet outdoors three weeks later, the Guardian understands.

He will set out a four-stage lockdown plan for the easing of the restrictions that touch almost every corner of daily life, with several weeks between each phase of reopening.

The prime minister is also expected to set out encouraging new data that appears to show vaccines are having an effect on transmission – a key factor for a more optimistic timetable for reopening the economy.

The roadmap will be set against four key tests that must be met before new restrictions begin to lift, including infection rates, which scientists have said remain worryingly high.

The chancellor, Rishi Sunak, has backed the more cautious approach, which one government source said was a “trade off” to allow people to see friends and family earlier if parts of the economy remained closed.

“People have not seen their family and friends for months; this is about recognising that,” the source said. “By 29 March it will be the school holidays, so things will switch from kids mixing at schools to them being in their households so that households can start meeting up.

“You would not be able to add any new sectors at that point. At the moment the emphasis is firmly on schools and social contact.”

The prime minister has resisted calls to reopen pub beer gardens from Easter to allow people to socialise outdoors – which will now be pushed back until at least April.

Johnson will announce that restrictions will begin to lift for the first phase beginning on 8 March, when all schools will reopen, despite major concerns from teaching unions. From that date, care homes will allow restricted visiting and people can socialise outdoors with one other friend or relative – which is not currently permitted. Outdoor school sports and activities will also restart.

As part of the first phase, rules will again relax from 29 March, when schools break up for the Easter holidays. Guidance telling people to “stay at home” in their local area will be lifted, outdoor gatherings of either six people or two households will be able to take place, and outdoor sports facilities such as tennis or basketball courts will reopen on that date, including organised adult and children’s sports such as grassroots football.

The second stage in April will see reopening of non-essential retail and could include outdoor hospitality, and in May there could be the tentative restarting of sports and music events paired with mass testing.

Government sources said there would be some aspects of lockdown – such as home working and international travel – where there was not expected to be any set time for rules to change. “Much of that is still dependent on factors outside our control,” one source said.

Speaking ahead of Monday’s roadmap, Johnson suggested the government had overhauled its priorities.

“Our priority has always been getting children back into school, which we know is crucial for their education as well as their mental and physical wellbeing, and we will also be prioritising ways for people to reunite with loved ones safely,” Johnson said.

He said the plan would “bring us out of lockdown cautiously” and would be reassessed at every stage. “We will be cautious about this approach so that we do not undo the progress we have achieved so far and the sacrifices each and every one of you has made to keep yourself and others safe.”

It is understood that positive data on the vaccine’s effect on transmission has meant Johnson has been able to follow his more optimistic track for the reopening of the economy.

Johnson is expected to set out new data showing the effect vaccines are having on community transmission, which was presented by ministers finalising the roadmap.

The health secretary, Matt Hancock, said on Sunday that the government had “seen early data that there’s a reduction in transmission for those who get the jab” – though the evidence is still limited.

The plan for reopening is expected to run to more than 50 pages and contain detailed economic and public health justifications for each measure – something which has been repeatedly demanded by lockdown-sceptic MPs.

There will be no more regional tiers and all of England will be covered by the same rules, though devolved governments in Scotland, Wales and Northern Ireland are setting out their own plans for reopening.

The cautious reopening will mean Sunak is now likely to extend the furlough scheme until the autumn, with some sectors still facing no timetable for reopening, such as nightclubs.

The plan will be put to the cabinet on Monday morning, followed by an afternoon statement to parliament and then a press conference at 7pm.

Johnson will underline that each stage is subject to four tests – the successful continued deployment of the vaccine programme, continued evidence that vaccines are reducing hospitalisations and deaths, low infection rates which do not risk a surge in hospitalisations, and that the programme is not threatened by a new Covid variant.

The prime minister said that he had determined the four tests were now being met so that the first stage could go ahead on 8 March.

A number of Tory MPs have urged the government to go much faster in the lifting of restrictions, something that scientific advisers have warned Johnson could lead to a surge in new hospitalisations.

Those MPs could be on a collision course with the prime minister when MPs vote on the regulations in the coming weeks.

Mark Harper, the leader of the Covid Recovery Group of lockdown-sceptic backbenchers, said all legal restrictions put in place in response to the pandemic should be lifted by the end of April.

Harper said restrictions could not continue just because of a fear of new variants. “If we are going to say we are so worried about a future variant that might not be susceptible to the vaccine, that’s a recipe for never unlocking our economy and our society, and I don’t think that’s really an acceptable proposition,” he said.

Labour will use the roadmap in order to urge the government to put more support in place for self-isolation – in order to avert a fourth national lockdown.