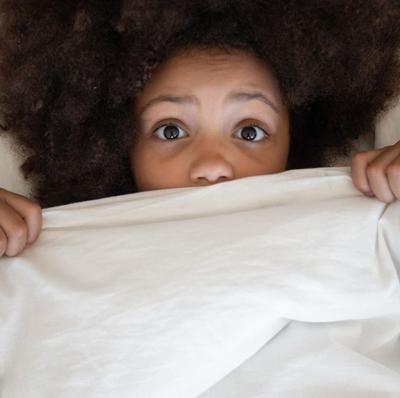 The difference between a nightmare and a night terror and what to do if you (or your child) has one.

After a stressful, tiring day, nothing feels better than sinking into a deep, relaxing sleep. Sleep means sweet dreams and restorative rest for most people, but it’s a different story for those who suffer from night terrors.

Night terrors are not the same as nightmares. During a night terror, you may sit up suddenly in bed, scream or gasp for air, and behave fearfully. It might look like you’re awake, but most people don’t wake up and immediately fall back to sleep after an episode.

You might think that night terrors only happen to children. However, around 2% of adults also suffer these unnerving events. Many people don’t remember having night terrors and don’t report them to their doctor, so it’s likely that the number’s higher in reality.

We spoke to Dr Raheel Karim, Consultant Psychiatrist from Pall Mall Medical, to find out more about night terrors, what causes these episodes, and how to stop them:

What are night terrors?

Night terrors, like sleepwalking, are a form of parasomnia, a category of sleep disorders. These disorders involve abnormal movements, emotions, and behaviours that happen while you’re sleeping.

Even if you don’t have someone in the family who has night terrors, other factors could trigger an episode. Other night terror triggers can include:

Experts still do not understand the exact cause of night terrors, although they are associated with trauma and chronic stress, for example, Post Traumatic Stress Disorder.

According to the Sleep Foundation, if you have a sleep disorder like nocturnal asthma, obstructive sleep apnea (OSA), or restless leg syndrome, you are more likely to have night terrors. In children with night terrors, the breathing disorder OSA is present in more than half of them.

What happens during night terrors?

Night terrors usually occur during the first third of the night, when you’re in a deeper or non-REM sleep. ‘You may sit up suddenly in a fright, screaming or sounding distressed,’ explains Dr Karim. ‘If someone tries to comfort you as you’re experiencing a sleep terror, you may not recognise them.’

Someone having a night terror may also:

Usually, people are difficult to wake during a night terror, and when they do, they may not remember what happened.

What is the difference between a nightmare and a night terror?

NREM sleep happens first and is divided into three stages. The latter two are when you sleep deeply. After the NREM phases, you pass into a short period of REM sleep.

During REM or rapid eye movement sleep, your eyes are closed but move around rapidly. You may experience vivid dreams or nightmares, but not night terrors.

‘Everyone experiences nightmares from time to time, but night terrors tend to affect those who have a history of parasomnia or a rare few,’ explains Dr Karim. ‘A night terror can be quite scary, but when they wake up in the morning, they tend to remember only the nightmare and not the night terror.’

What causes night terrors in children?

Waking up to the sound of a screaming child is a distressing experience. Fortunately, even though night terrors are common in children, as Dr Karim explains, ‘their CNS is still developing, and when children reach adolescence, most outgrow them.’

He adds that ‘night terrors in children can be caused by genetics or related to a trauma or psychiatric disorder.’

Night terrors can happen because you are stressed or anxious. Doctors tend to agree there is a strong link between emotional stress and night terrors.

However, Dr Karim says, ‘In many circumstances, night terrors are not a sign of mental illness. There tends to be no significant association between psychological disorders and night terrors.’

Even though you may fear the worst because night terrors are so distressing, they do not mean you have a mental illness.

How do you stop night terrors?

‘When you hit puberty, you tend to grow out of night terrors,’ says Dr Karim. So, for most children with night terrors, they don’t require treatment. It’s merely a case of waiting.

For adults, night terrors may negatively impact their lives and relationships. It may be challenging to perform well at work or participate in your usual daily activities if your sleep is disturbed. Stopping night terrors may not be straightforward, but there are a couple of ways to help ease the situation.

‘Establishing a good sleep routine and practicing ways to improve your sleep will help stop night terrors,’ advises Dr Karim. Night terrors or not, it’s essential to get enough sleep. Often people find that if they commit to a healthy sleep schedule, then night terrors grow fewer or stop altogether.

There are many ways to improve your sleep, such as meditating, having a relaxing bath, and avoiding caffeine and alcohol. You may want to try different approaches and record the results in the diary. Over time you can create a sleep routine that works best for you and keeps away the night terrors.

‘If you feel that night terrors are caused by a particular event or health condition, your GP or sleep specialist will be able to point you in the right direction,’ says Dr Karim.

What to do when your child has night terrors

It’s important to stay calm when your child has a night terror and remember that this is probably more frightening for you than for the child.

‘When a child has a night terror, they are typically non-responsive, even though their eyes can be wide open. As a parent, it is important to comfort your child but not to wake them, as they’ll typically go back to sleep after a few minutes,’ says Dr Karim.

A night terror might seem extremely scary, but generally, the child won’t remember it, and there will be no long-lasting effects.

Does melatonin help with night terrors?

Melatonin is the sleep hormone. Your body produces melatonin in response to darkness, and it prepares you for sleep. If you have trouble sleeping, you may have naturally low levels.

So, does it help with night terrors? Dr Karim says ‘5 mg of melatonin has been proven to prevent night terrors, as it causes more REM sleep.’ However, some doctors have advised against melatonin, so it’s best to seek medical advice before starting a treatment regime.