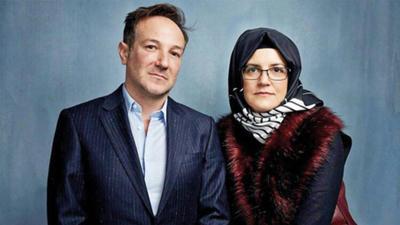 The country that did everything in its power to ensure justice regarding the murder of Jamal Khashoggi was Turkey, Bryan Fogel, the director of a new documentary about the horrific murder of the Saudi columnist, has said.

Speaking to daily Hürriyet’s Kelebek supplement, Fogel said that while Saudi Arabia did not admit its responsibility in the murder, Turkey showed the evidence it had and eventually forced the Saudi authorities to confess to the murder.

“Turkey was the only country in the world that really held Saudi Arabia responsible. I think Turkey was on the right side in the Jamal Khashoggi murder case,” Fogel said, underlining that history will write this truth.

Khashoggi, who was a Washington Post and Middle East Eye columnist, had walked into the Saudi consulate in Istanbul in October 2018, for an appointment to pick up documents that would allow him to marry his Turkish fiancee. But he never walked out.

“The Dissident,” which was released on Jan. 8, investigates the brutal murder and dismemberment of the journalist in the consulate building.

The film was directed and written by Fogel, who has previously won an Academy Award for Best Documentary for his film “Icarus,” which shed light on state-sponsored doping in Russia.

Noting that he arrived in Turkey one month after the murder and plied between Istanbul and Ankara for more than eight months, Fogel said that the Turkish authorities wanted to tell their stories.

“While doing this work, a sense of trust developed over the weeks and months, and the authorities gave the official report, police footages, forensic reports [of the incident] as a result,” the director noted.

Stating that President Recep Tayyip Erdoğan’s voice and image were allowed to be used in the documentary, Fogel said that he was grateful to the Turkish government for the information and evidence they provided to tell Khashoggi’s story.

The director also stated that he was disappointed that the film was not listed for the Academy Awards despite receiving a standing ovation worldwide, adding that the Saudi state is conducting a negative propaganda campaign about the film.

“They attacked our IMDb score. The platform realized this and did their best. They also attacked our Rotten Tomatoes points, and this attack is still going on,” Fogel said.

“I think all this confirms and solidifies the film’s findings and information,” he added.

Stressing that Khashoggi was a moderate journalist with a passion for his country, the director said he hoped the film would teach people to appreciate their freedom more.

“I hope [the movie] inspires those who are oppressed or unable to raise their voices in some way, to take action to help,” he noted.