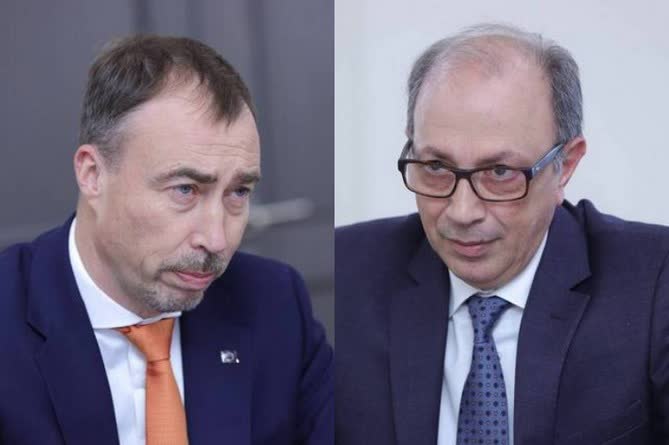 It said Ayvazyan and Klaar agreed that all the key issues of a peaceful settlement of the Karabakh conflict, including its status, should be resolved exclusively through negotiations within the framework of the OSCE Minsk Group co-chairmanship.

Tovio Klaar confirmed the European Union’s support for the OSCE Minsk Group Co-Chairs and the peace process, which should lead to a lasting and just resolution of the conflict.

The two men also discussed regional security and stability issues. In the context of the humanitarian crisis caused by the use of force by Azerbaijan against Artsakh (Nagorno-Karabakh) and the need to address the social needs of the Artsakh Armenians, Ayvazyan and Klaar stressed the importance of the international community’s involvement.

The Armenian Foreign Minister stressed the need for the immediate and safe return of Armenian prisoners of war and civilians kept in Azerbaijan in the status of hostages to their homeland. Ayvazyan also stressed the priority of restoring and protecting the rights of the Artsakh Armenians, who were evicted from their homes as a result of the recent Turkish-Azerbaijani aggression.

During the meeting, the two men exchanged also views on the broad agenda of the Armenia-EU partnership. The parties expressed satisfaction with the completion of the ratification process of the Comprehensive and Enhanced Partnership Agreement between Armenia and EU.

Ayvazyan reaffirmed Armenia’s commitment to implementing reforms aimed at strengthening democracy, the rule of law and the protection of human rights.

The Armenia-EU Comprehensive and Enhanced Partnership Agreement will fully enter into force on March 1, 2021.

Armenia was notified of the completion of the ratification process of the agreement by the EU member states on February 10 this year. The agreement raises relations between Armenia and the European Union to a new level of partnership, regulates dialogue in the political and economic spheres, as well as sectoral cooperation and trade relations.