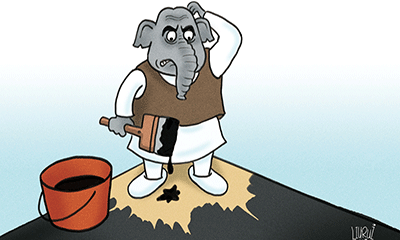 What next for India? Illustration: Liu Rui/GT

The 10th round of the China-India Corps Commander Level Meeting was held on Saturday on the Chinese side of the Moldo-Chushul border meeting point, according to a joint press release published by China’s Ministry of National Defense on Sunday. The two sides positively appraised the smooth completion of disengagement of frontline troops in the Pangong Tso area, noting that it was a significant step forward that provided a good basis for resolving other issues along the Line of Actual Control (LAC) in the Western Sector of China-India border areas, the press release said.

China-India disengagement delivers a positive signal that bilateral ties are moving toward détente. It shows that India has realized that its provocations against China on the border have not brought India its desired results.

An editorial of the Indian Express said, “India, China should repair bilateral relations on basis of disengagement process.” But how much can they be fixed? Can the bilateral relationship return to the one before the border clash since June 2020? “It can hardly be achieved,” Liu Zongyi, secretary-general of the Research Center for China-South Asia Cooperation at Shanghai Institutes for International Studies, told Global Times on Monday.

Many political elites and analysts in India see China as a top threat, regarding the competition between the two countries as a geopolitical rivalry and believing the differences between China and India are irreconcilable. Some Indian political elites and media outlets have repeatedly incited nationalism against China in their country. Indians’ nationalism seems to have been inflamed to the extreme amid border tensions. Indian society’s attitude toward China has remarkably changed. Even against the backdrop of disengagement, attempts to play up nationalism still continue in that country. Some Indian media outlets even portrayed the disengagement between the two countries as a victory only for India. Liu said, at present, there is little constructive atmosphere in Indian society for a rapprochement between China and India.

New Delhi has fueled nationalism to serve its political purpose. However, to improve its ties with China, it has to curb such sentiment among the public. Nationalism poses a challenge to the Modi administration and the repair of bilateral ties.

The international community has seen that India recently ramped up its cooperation with the US. Some voices suspect New Delhi, which claims to adhere to an independent foreign policy, has become a quasi-ally of Washington. However, since the US’ Indo-Pacific strategy did not provide India any real benefits, its strategic independence has been affected. New Delhi needs to return to the policy which best suits its national interests.

China has never treated India as its strategic rival, and wants to see their bilateral ties return to the right track. Liu said how far the bilateral ties can be fixed does not depend on China, and the ball is in India’s court. Indian society should change their mindset and view China and India as partners instead of rivals.