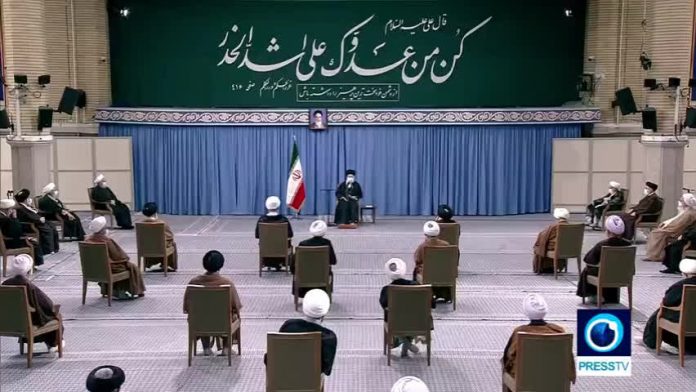 https://www.presstv.com-Leader of the Islamic Revolution Ayatollah Seyyed Ali Khamenei addresses a meeting with members of the Assembly of Experts in Tehran on February 22, 2021. (Photo by khamenei.ir)

Leader of the Islamic Revolution Ayatollah Seyyed Ali Khamenei says the Islamic Republic will not back down on its right to peaceful nuclear technology and will continue its progress in this field in line with the country’s present and future needs.

“Like other issues, the Islamic Republic will not back down on the nuclear issues [in the face of Western pressures] and will continue to march forward on the basis of the country’s present and future expediencies,” Ayatollah Khamenei made the remarks during a Sunday evening meeting with members of the Assembly of Experts in Tehran.

Referring to massacre of 220,000 innocent people in the US nuclear bombardment of two Japanese cities during World War II as well as indiscriminate bombardment of Yemeni people, their markets, hospitals and schools by Western-made warplanes, the Leader said, “Massacring civilians and innocent people is the way of Americans and Western countries, but the Islamic Republic does not believe in this method and, therefore, never thinks about nuclear weapons.”

“In the meantime, that international Zionist clown, who keeps saying that ‘we will not allow Iran to build nuclear weapons’, must know that if the Islamic Republic had any decision to produce nuclear weapons, he and those bigger than him could not prevent it.”

“The issue of nuclear weapon is just a pretext. They are even opposed to us having access to conventional weapons, because they want to strip Iran of the components of power,” the Leader said.

Ayatollah Khamenei warned that Western powers want Iran to be in need of their assistance the day when the country requires nuclear energy, so that they could take advantage of our need as a means for imposing [their will on us], bully and extort [us].

“However, we are determined to acquire nuclear capabilities proportionate to the country’s needs and this is why the level of Iran’s [uranium] enrichment will not remain [limited to] 20 percent and the country will take action to any extent that it needs. For example, to achieve nuclear propulsion [technology] or for other purposes, we may even increase uranium enrichment to 60 percent purity,” Ayatollah Khamenei added.

“Of course, a contract has been signed for [a period of] several years. If they comply with it, we will also comply until those several years [are over], but Western countries are well aware that we do not seek nuclear weapons,” the Leader said.

In another part of his remarks, the Leader pointed to a law recently approved by Iran’s Parliament to reduce Tehran’s commitments under the 2015 nuclear agreement, officially known as the Joint Comprehensive Plan of Action (JCPOA), in response to the US withdrawal from the deal, and to thwart the impact on the country of US sanctions, which were re-imposed following Washington’s withdrawal from the deal.

Ayatollah Khamenei said, “Majlis passed a law and the administration welcomed it. All measures that should have been taken up to yesterday were taken and, God willing, another part of that law will enter into force tomorrow.”

Referring to an existing contention between the Iranian administration and Parliament with regard to the implementation of the aforesaid law, the Leader said, “Such misunderstandings can be resolved and the two sides must endeavor to settle this issue through cooperation. Differences should not be left on their own or be intensified so as to show division [in the country].”

“The administration considers itself obligated to implement this law, and this law, which is a good law, must be meticulously implemented,” the Leader said.

The Leader also slammed the latest position adopted by the United States and three European signatories to the JCPOA (UK, France, Germany) toward Iran as “pompous, bullying and unfair,” emphasizing that such a position “will only make the Iranian nation hate them even more.”

“Since day one and for a long period of time, the Islamic Republic fulfilled its commitments on the basis of the Islamic teachings, but the party that did not fulfill its obligations since the first day was these four countries. Therefore, they must be scolded, criticized and be held accountable,” Ayatollah Khamenei emphasized.

The Leader said, “When the US quit the JCPOA and others supported it, it is Qur’an’s command that you should also give up [your] commitments. However, our honorable administration did not give up its commitments and just reduced some of them in a gradual manner. Of course, these [remedial] measures are reversible if they [other parties to the JCPOA] restart complying with their commitments.”