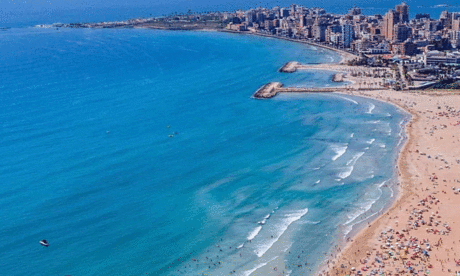 A disastrous oil spill that has blackened most of Israel’s shoreline has apparently affected Lebanon and deposits of tar have started washing up in the Lebanese south.

The management of the city of Tyre’s coastal nature reserve, one of Lebanon’s last remaining sandy beaches and an important nesting site for endangered Loggerhead and Green sea turtles, said the spill could endanger marine life and biodiversity in the area.

The reserve is one of two marine protected areas in Lebanon and contains a wide diversity of ecosystems and is located on a major bird migration route.

Hassan Hamza, engineer at the Tyre reserve, said teams were evaluating how much tar washed up to organize quick clean ups. He said it appeared that “most Lebanese beaches have been affected by this pollution.”

Caretaker Prime Minister Hassan Diab has meanwhile asked the defense and environment ministers to follow up and said the government was “acting accordingly to repair the damage caused by the leakage.”

In Israel, thousands of volunteers, soldiers and park rangers have taken up the task of extracting millions of tiny globs of sticky black tar that have coated the Israeli shoreline in recent days after an oil spill in the Mediterranean Sea. The cleanup is expected to take months.

Israel’s Environmental Protection Ministry is investigating the cause of the oil spill, believed to have taken place between Feb. 6-10. On Monday, the ministry released a court-issued gag order on all details of the investigation into the party responsible. The Nature and Parks Authority has called it one of Israel’s “worst ecological disasters” to date.

The ministry said it received no prior warning from any international organizations about the spill.

On Sunday, the ministry urged Israelis to stay away from the beaches, citing serious health hazards posed by the tar. It has caused extensive damage to wildlife.